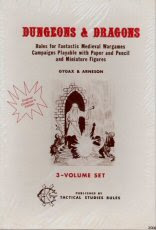 As I’ve stated before, this blog is not concerned with belittling any of the subsequent versions or editions in the D&D family. After all, they are the offspring of OD&D, and all of us share an interest in the hobby for one reason, and one reason only. To have fun. As long as you are having fun under the D&D Umbrella, regardless of which edition you might use, please, carry on, but perhaps take a moment to read why I like the original version so much.

First and foremost, I really want to stop having to use the acronym ‘OD&D’. It’s D&D, plain and simple. By all rights, the original boxed books, Vol.s I-III, aka the Little Brown Books (LBB) from 1974, should be the only edition which uses the D&D title. Much like Star Wars, that first epic film from 1977 was known then simply as Star Wars. It was and always will be Star Wars, regardless of what title or episode number is attached to it in hindsight.

In order to enlighten the masses, 1974’s publication of the grand daddy of them all is also referred to as Original D&D, OD&D for short. I will begrudgingly continue to call it such, in order to avoid any confusion. After all, D&D, much like Star Wars, is now a brand name. But don’t go around here talking about A New Hope. It’s Star Wars, damn it.

As a relative new comer to *ahem* OD&D, I have discovered some basic truths about the game which have convinced me that it is the best version of D&D. Initially I was drawn to the publications out of curiosity, and a sense of nostalgia. I’ve always been a sucker for little brown books, from Arduin, to Booty and the Beasts, to The Necromicon. For reasons I have related before, though, I was so mired in the belief that AD&D was the more improved/streamlined version, that I never really took the time to understand OD&D.

Blessed by the internet, and cheap PDF’s, I have discovered, all these years later, how wrong I was. If it weren’t for Fin’s OD&D forum, I may never have come to this realization, though. Check it out, it’s a fabulous community.

I believe that given the time or guidance to understand what OD&D stands for, and how to use it, many more D&D players would also come to the conclusion that OD&D is, indeed, the superior version. That’s Why, in a nutshell.

Truthfully, I believe that D&D could have been introduced to the gaming world in a simple 12 page pamphlet. Everything else in OD&D is essentially an example of play. What’s so great about that, you are probably asking. Well, let me continue a bit. OD&D was a concept. It was the first game to ever say, “OK, let’s play make-believe. We need an author (referee) and then players to get together, and share their imagination.” This was and still is, the concept. The concept which changed gaming forever.

To quote a bit, this is from the Introduction in Vol. I:

…they are guidelines to follow in designing your own fantastic-medieval campaign. … your time and imagination are the only limiting factors…

Guidelines only. Not hard and fast rules. Imagination is the key element, given you have time to exercise it.

From the Afterward in Vol. II:

We have attempted to furnish an ample framework, and building should be both easy and fun. In this light, we urge you to refrain from writing for rule interpretations or the like unless you are absolutely at a loss, for everything herein is fantastic, and the best way is to decide how you would like it to be, and then make it just that way! On the other hand, we are not loath to answer your questions, but why have us do any more of your imagining for you?

That passage speaks volumes about this concept of which I speak. To surmise, Gygax and Arneson explained this concept, gave us examples for making rules to actually play this game, and then said, do it how you want to do it. Not only that, but they then tried to get out of the way in order to allow players to use this concept to it’s fullest extent. Not by telling them what to do, but by telling them how to do it.

As explained in the Scope section of Vol. I:

…the scope need not be restricted to the medieval; it can stretch from the prehistoric to the imagined future…

This reiterates the fact that OD&D is a concept, not confined by the examples and guides proposed in the first three volumes.

These truths of OD&D are the basis around which I have played throughout my entire D&D career. In order to pursue these most important aspects of D&D, one cannot get weighed down by rules, per se. The important thing is the concept. This is role-playing, and it is fueled by your imagination, NOT by endless volumes of rules specifically telling you HOW to play. You decide how to play, and you make your own rules.

Once you embrace this concept, you might even realize that you don’t need any of the D&D rules, and in fact, you can make your own entirely home brewed campaigns. After all, they are just guidelines! Guess what, you are still actually playing OD&D. The end result of your gaming exercises might not actually follow the very basic rules of OD&D, but the intent of this masterpiece written over 30 years ago is to tell you that yes, you have now mastered the concept which we were trying to explain.

OD&D, of all of the various versions within it’s family, provides the maximum potential for imagination, role-playing, logic and critical thinking. How? Simply by providing a very basic framework. Referees cannot rely on published material or rules for every situation. Players cannot rely on character skills or dice to resolve every situation. This approach demands the most from it’s participants. It’s a style of play which offers the most potential for all of these various aspects. Aspects which generate the purest forms of the genre, and maximize the fun for all involved.

The rules do not get in the way of a good time. In an upcoming post, I will detail some of the actual rules suggested for play which I have come to appreciate so much.

This is Why I love OD&D. It’s a concept with no limits.

~Sham, Quixotic Referee
Posted by Sham aka Dave at 9:20 PM

Ok, maybe it's because I'm late and it's tired, but I'm not sure I followed you here. You seem to be saying you love the rules because there are no rules. That almost sounds like a zen koan. Can you elucidate on this, or should I wait for the next installment?

I said OD&D is my favorite version or edition of the game. I said the rules are presented as guidelines, not that there are no rules. The authors take the time to explain that each player should make the game their own. In other words, not hard and fast rules. It's very difficult to compare OD&D to later versions of D&D on this conceptual level.

This is just the first part of "Why OD&D?"

Yeah, sleep first, then post should be my motto. *sheepish smile*

It's cool! At least you're taking the time to allow me to share a bit about this crazy hobby with you. The whole 'rules' thing is a strange subject when speaking of OD&D. The authors make it quite clear that there are no rules, only guidelines. Then in AD&D, they set those rules in stone quite deliberately.

You should link parts 2-4 within the blog here (actually, put the links to all the parts in each part).

You're right, Jim. I'll interlink the series. I'm also going to link them somewhere in my layout page since I think they are somewhat noteworthy, well...as far as most of the crap I ramble about here. Thanks for the suggestion!

What’s up to all, it’s genuinely a fastidious for me to visit this website, it consists of priceless Information. 메이저사이트

This is very interesting, You are a very skilled blogger. 경마사이트

I have joined your feed and look forward to
seeking more of your magnificent post. Also, I’ve shared your site in my social networks! 카지노사이트

I couldn’t resist commenting on this article. Wonderful post! 사설토토

Your article has answered the question I was wondering about! I would like to write a thesis on this subject, but I would like you to give your opinion once :D 꽁머니