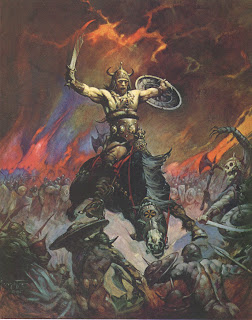 While I recently embraced a change in philosophy in Solstice with a more abstract treatment of melee, I’ve been working on an as yet to be named treatment of combat. This treatment, dubbed Project X for now, will be a gory, gritty approach to melee. Once designed, if my players decide that they prefer this type of detailed swordplay, it can be incorporated easily into OD&D campaigns.

The first step toward this grittier melee model will be shortening the combat rounds to 10 seconds each. Turns will still be 10 minutes long, and rounds still one minute, but the actual combat round will be 10 seconds long. I might rename these to phases or segments in the end, but a full round would consist of six such combat rounds. This is all in an effort to remove the current abstract approach of one minute of combat per melee exchange.

With a 10 second span of time, rolls to hit would indeed represent actual swings of the mace, or thrusts of the sword. Certain Monsters and experienced Fighting Men could realize multiple attacks within the combat round under these optional rules.

Damage would still be based on the d6 default range, with bonuses or penalties incorporated given the circumstances. Bonuses to damage, via magic or class, could even be reflected by using multiple dice, and using the higher result.

After I purchased the Chainmail PDF, I had the urge to convert melee to a full on d6 approach, so rolls to hit would possibly be converted from 1d20 to 2d6. This method opens up a lot of possibilities for using the two higher results while throwing more than 2d6, based on experience or magical bonuses.

Also inspired by Chainmail, I would revert to a static Armor Class, using Attack vs. Defense modifiers applied to the 2d6 roll, and incorporating weapon type vs. AC tables. Weapons would be classified as to damage type; pierce, slash or crush, with further factors based on weapon mechanics.

Fumbles and Critical Hits would be in heavy use, along with Arduin/ICE inspired tables and some very bloody results. Such an approach to realistic damage would require an in depth treatment of hit points.

Tissue damage, shock, and shock recovery would be defined. Morale and fatigue might be addressed and treated as a portion of the character hit point total. Certain Monsters would simply have high hit point totals as a reflection of their mass, while smaller Monsters particularly adept at melee, but no larger than man-size, would also conform to these redefined hit point rules.

Vital hit points would be defined as well for characters. Those last six hit pints being representative of actual lethal damage, while the rest before those last six points being more readily recoverable.

I’ll certainly be yoinking Trollsmyth’s shields-shall-be-splintered idea, and I would probably add further shield and armor options and rules to the mix. Hand to hand combatants would have certain melee options, including parry, feint, thrust, etc. to add more depth to the system. Armor might even provide a measure of ablative value, able to absorb certain damage types.

Needless to say, this would involve lots of complex situations based on weapon types, armor types, positioning, morale, styles and options. A combat model that would require a slower pace, taking into account many factors and requiring plenty of tables. Most of all, a system which would produce a certain verisimilitude missing in the current abstract model.

The challenge is to mesh these ideas while still maintaining a gritty, gory, deadly feel without turning into a numbers crunching, overtly complex affair. This is my goal for Project X.

~Sham, Quixotic Referee
Posted by Sham aka Dave at 6:40 PM

Very cool idea! I really like how you're making it a modular plug-in for OD&D.

The first step toward this grittier melee model will be shortening the combat rounds to 10 seconds each.

You might consider whacking that in half, to 5 seconds. 10 seconds is forever when people are swinging long, heavy, hurty things at you.

Fumbles and Critical Hits would be in heavy use, along with Arduin/ICE inspired tables and some very bloody results.

If you're going to do this, I'd certainly move away from a single d20 roll, where it's far too easy to roll a 1 or a 20, or I'd base Fumbles and Critical Hits on something other than those two numbers.

Morale and fatigue might be addressed and treated as a portion of the character hit point total.

One thing I'm working on in my homebrew is for attackers to do damage to their foes moral. A swashbuckler might forgo doing lots of physical damage in order to engage in all sorts of moral-damaging attacks, such as tauntingly whacking their foes on the rear or other forms of "counting coup", or slashing their trademark symbol in the enemy leader's doublet.

Best of luck on this! I can't wait to see what you come up with.

Thanks! I think the 5 second combat round is a good idea, too. You're right in that 10 seconds is an eternity in melee.

I'm considering alternate RTH methods. In my old D&D games, we used a d6 and a d10 to RTH. Odd on the d6 meant the d10 was read as rolled, even on the d6 meant 10 was added to the d10 roll. This opened up all sorts of house rules, and an actual roll on the Critical Hit Table was only called for on a 6 with a 10. A roll on the Fumble Table was a 1 and a 1. Currently, I'm leaning to 2d6 RTH. But I'm wide open on this project right now.

I love the Moral Damage idea! Such a system would be great. Not particularly gritty, but...it gets me thinking of other possibilities.