As promised, I wanted to post a bit about my process for map development. I love drawing maps, and as referee, a good looking map makes me enjoy running that particular adventure more than staring at a boring or confusing map. Now, my style is particularly neat and clean for the most part. It’s just how my maps turn out. I love seeing other people’s maps, and I am usually envious of the raw, unrefined style that, for me, is so often evocative of old school, home brew adventures. Nevertheless, this is my style and I make maps this way, for better or worse.

Normally, when I set about to drawing a map, I already have thought out the theme for that adventure. Whether that theme defines the entire map, or just a portion of it, I have it worked out beforehand. By this point, I have a handful of ideas and features planned based on this theme, and I might even have a half dozen or so major rooms fleshed out a bit on paper.

Often, I will draw these features and major rooms first on the map, and connect them later. Other times I just start drawing lines and fit these particulars in as I go. I want to use the map I’m submitting for SGotC for this example. I’ll repost the map I started with a few days ago here.

My first step is the outline. Simply lines with no detail or features of note, as shown below. 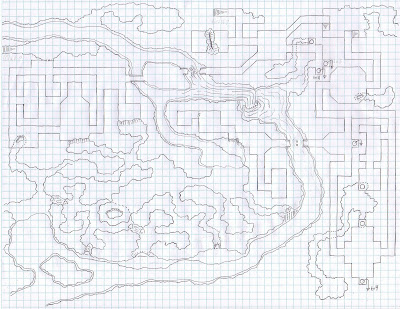 Once I am satisfied with the overall lay-out, I will consider further details of the adventure. This in depth analysis allows me to proceed to the next step, that of adding details, doors and making minor fixes, as shown below. 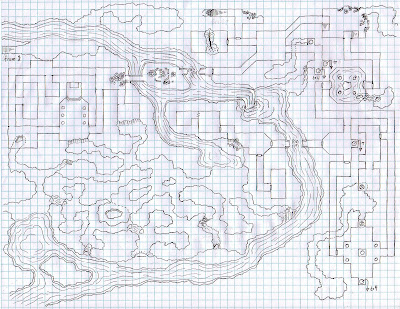 The next step is more involved, as it takes into account the actual description of each of the soon to be keyed areas. During this stage, I sit down and rough out a list of rooms and small descriptions for each. Next I number the map in as logical a manner as I can, as shown below. 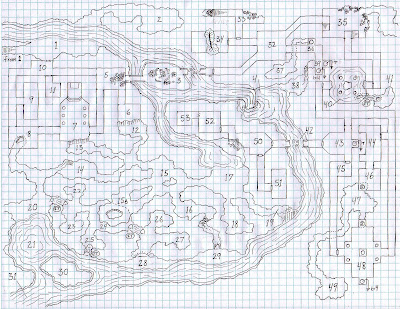 Normally, at this point, I go about the process of actually writing the entire adventure. This allows me to draw further details on the map, make notations if necessary, then title it and dress it up a bit. For this post, I am proceeding to the last stage before actually finishing the written adventure, but I am fairly satisfied with the map as is, and I have most of the entire dungeon level worked out on paper and in my head. The example below is fairly close to what I will end up submitting to Fight On!. 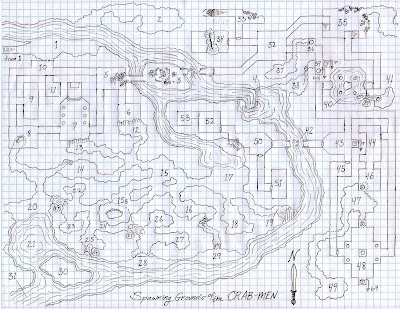 I’m fairly gun-shy right now about adding shading or delineating lines, and I feel once numbered this particular map is fairly distinct and easy to understand. I’ll probably add delineating lines and submit two versions in the end.

There's not much difference between versions 3 and 4 in this example, but I suspect that by the time I've finished writing the adventure, there will be plenty of details added here and there.

A few complaints. The erasure marks scan in too damn well. The numbers I drew for keying are too large, and detract from the finished map. I'm very rarely satisfied with the flow of the numbering on my maps, and this one is no different. Area 3 is kind of messy.

I hope you enjoy these maps, and I would like to provide further step by step examples in the future. Hopefully my next series of maps will not include any caves, as I believe my pure brick and block maps are much more interesting.

~Sham, Quixotic Referee
Posted by Sham aka Dave at 12:33 AM

A great looking map. I was reminded yet again of the shattered bridges you've drawn on it. Did the crabmen drive out the previous occupants, who tried to stem the tide of invasion by knocking down their bridges? Or were those bridges crafted by the crabmen themselves, who have since fallen on hard times?

I can't wait to find out.

Wow, that is an impressive map, I can't wait to read your dungeon level in Fight On! Bring on the crabmen!

Thanks guys! Some might prefer the stage one map, and really it's a fine template for DM's to print then detail, number and fill as they might desire, without all of my subsequent work.