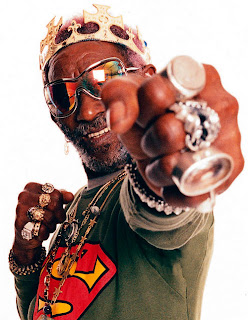 Words cannot describe the legacy of Lee "Scratch" Perry. Below is a minor sampling of his staggering body of work which spans five decades. "The Riddim of the Ghetto and the Lyrics of the Streets"; 70 years old and still recording and touring, Lee Perry is credited with over 70 albums.

Eccentric? Unbalanced? Genius? In his own words:

"Good evening and greetings to you people of the Universe - this is Lee "Scratch" Perry, the mighty Upsetter, madder than mad, dreader than dread, redder than red, dis ya one heavier than lead. We are here at the turntable terranova, it means we are taking over..."

"I am an alien from the other world, from outer space, I don't have no land, no estate, no property, no house. Not on this earth. I live in space - I'm only a visitor here. Some people are only here to collect property. I am here with my suitcase to collect only the good brains."

"I, Pipecock Jackson, Jack Lightning, Jesse The Hammer, Lee 'Scratch' Perry, Daniel Dandelion the Lion, Jah Rastafari the crumbler, the ghost of King Arthur, put a curse on BBC radio and television, and BBC government, that they can never undo until they start playing Mr. Perry records morning, noon, and night, and around the clock - tick tock."


Have a great weekend!