Spawning Grounds of the Crab-men

Calithena, one of the head honchos behind the new old school gaming fanzine Fight On! has started a thread over at the Original D&D Discussion forum. The idea is to launch a community Megadungeon project, one level or module at a time. Each willing author can design his or her own level, and these self-contained levels will be published in subsequent issues of Fight On! Each will be a stand-alone adventure for now. The goal is to eventually fit each level together for a complete published Megadungeon in the future.

Oh yeah. I jumped on this idea. This is all under the assumption that my submission will be accepted and published. This would indeed be the first published material for yours truly, so I'm taking this seriously. At the same time, I need to consider the audience of Fight On!, and the limitations I'll be working under.

Here's a quote from Calithena detailing some of the aspects of this project:

and here are some details. Note that if we made this a community project everyone involved would have ample opportunity to get creative with their own levels/sublevels and even add new ones, even where it overrode what I have already used in my games. I would want modest control over some big picture stuff but I think you all know I'm pretty flexible.

The following indicates the levels of the dungeon, with the levels they connect to in parentheses:

I liked the sound of The Fane of Salicia, and The Blasphemous Shrine of the Tentacled God. But, in the end I asked if I could have the honor of writing Level 3, Spawning Grounds of the Crab-men. 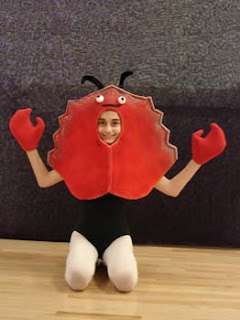 Why? Because Crab-men are cool.

My vision thus far for the level is in it's formative stages. I am not sure how in depth I'll get on an ecological stage, since that sort of minutiae is kind of counter-old school. Besides, in the spirit of Megadungeons, if things make too much sense, the mystery of the underworld is lost. The inexplicable is a necessary ingredient in order to maintain that other-worldy feel. Others might certainly take their favored approach in writing for The Darkness Beneath, but this is simply my preferred method for Megadungeons.

So, the purpose of this post is actually two-fold. First off, to direct potential fans to the project, in order that they too might be able to participate in this interesting project, AND

I'd like to get some seeds of inspiration germinating for my own Level. I have quite a few very vague ideas jotted down, but here's what I'm looking for from the blogosphere:

A Half-Dozen Ideas for Spawning Grounds of the Crab-men.

Simple, one sentence suggestions are what I want. Be as detailed as you like, but I'm not looking for anything more than basic ideas, from which to design my major rooms within the dungeon. 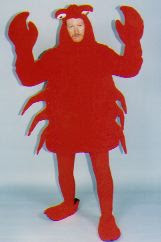 I won't tip my hand concerning the project too much, as I think you should purchase Fight On! if you want to see the end result, BUT I'd love to witness some cross-pollenation of ideas from the blogosphere from which awesomeness could spring forth.

Oh, and please! Let this be the first and last reference to the Crabman from the Fiend Folio. I am NOT using the FF Crabman.

~Sham, Quixotic Referee
Posted by Sham aka Dave at 12:49 PM

So, are the crabmen really humanoid crabs? Or people who have adopted the crab as their totem?

I'd expect lots of water in this level, with much of it being natural caverns. There should be places that can only be reached by swimming or even passing through completely submerged tunnels (though don't go crazy, since water breathing is a 3rd level spell in Moldvay/Cook).

I'd build a lot around the crabmen's defense against the troglodytes, since they're just a level up, too.

Um... And that's all I got. Ok, sorry, that's lame, I'll see if I can't whack any more sparks off my dull brain today.

Interesting question! The Crab-men could be some degenerate Neanderthal types, who worship the grandaddy of all Giant Crabs, and actually make use of weapons and shields scavanged from the lesser Giant Crabs on the level.

I was initially approaching this from the humanoid crabs level.

Maybe they are Were-Crabs of sorts. They have rituals which eventually make them more and more crab-like? Or, the shamanistic leaders of the Crab-men have spells which allow them to take on Crab attributes.

I need to stew on that aspect more.

As far as the level, yes plenty of water, plenty of open areas with cliff faces, crags, caves and things that the Crabs can easily climb to and from.

The Trogs are indeed their mortal enemies, so they'll end up on the wandering monsters table.

Or, if you wanna go all icky-creepy-underworld-Innsmouth-Davey-Jones'-crew-from-those -pirate-movies on this, say the folks here are degenerate, in-bred Neanderthal types that have somehow been crossbred with some sort of demonic crustacean. Some might still be mostly human, but others have varying degrees of crab in their physique.

I mean, hell, the place is the called the spawning grounds, right? ;p

Oooh I like that idea Brian (about the degenerate crab-demon half-breeds). Sounds very cool.

I just saw this thread over at the forums, what a great idea. I am tempted to join in, but not sure I am up to the task.

I wish I had the time. But I don't, so I'll just keep peppering poor Sham with my insanities until he shoves his fingers in his ears and starts shouting, "La! La! La! I can't hear you!" really loud. ;)

degenerate, in-bred Neanderthal types that have somehow been crossbred with some sort of demonic crustacean.

Exactly the kind of thing I was looking for. I knew I wanted something involving men who had somehow been crossed with crabs, and this will get me going in the right direction.

I am tempted to join in, but not sure I am up to the task.

Well, you could throw some Crab ideas at me, and contribute in that manner!

Thanks for the comments guys!

1) I won't mention where this quote comes from, since you asked we not, but it is evocative, "Crabmen are often subjected to raids by sahuagin who consider them a tasty delicacy." (What can I say? My blog is nearly eponymous; I feel compelled to evangelize on behalf of the book.)

2) The crabmen are not worshippers of the crabs, nor hybrids. They are simple fishermen, casting their nets on the dark waters of the crab's spawning grounds, and trading their catch to the goblins/orcs/kobolds of level 1. It's the easiest way to acquire their favorite meat, the deadliest catch: human, elf and halfling.

I do like that 'tasty delicacy' FF bit myself. I don't have anything against the FF as a whole, just certain entries in it make me wonder WTF the author was thinking.

I've been joking about including a vat of melted butter somewhere in the adventure.

Your second idea sounds just plain evil. I like the way you think.

Lastly...you mean to tell me I can't use the ballerina style Crab-men from my pic in the post? I suppose your example is somewhat more menacing. A tad. Help me place those beasties, they look somewhat familiar.

Thanks for the input!

Help me place those beasties, they look somewhat familiar.

Those are the Garthim, the soldier/thugs of the Skeksis from The Dark Crystal. Big, scary, and mean.

Ahhh yes, right you are. Hmmm. I need to watch that again sometime. I think our 13 year old has it on one of those silly little Sony PSP DVDs.

Ah well. In the meantime, I'll be thinking more about Giant Enemy Crab.

Just remembered a snippet I'd written on crab-men, in a series of posts I wrote kicking around game settings based on the FF: "...few win free of indenture to the crab men, for the building up and tearing down of their shell and coral cities is unceasing."

So, a weird city housing their spawning pools, above and beneath the waters of an underground lake, toiled over by slaves? Maybe not. I think I've read that one before.

Thanks for all the comments, guys! I've pretty much got the entire crab-man thing worked out now, thanks for getting the creative seeds planted and cultivated.

I'm working on the map now, and I have a general idea for filling almost all of the 58 keyed areas. I need to make sure I leave plenty of wiggle room for creative DM's who might grab the module and want to spice it up a bit, so I will probably have to leave out a few ideas.