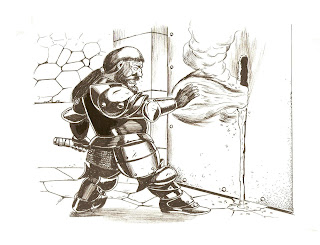 
In my cheeky introduction to Adventuring Obstacles, I used a quick analogy showing why simply rolling dice to avoid these various challenges is a no-no. Such an approach leads to meta-gaming, where the numbers take over, and mean more than the game itself.

I find fault with the original Thief concept, and theorized that the class, introduced in Supplement I, Greyhawk, has led modern D&D down a narrow, meta-gaming path. To the point where many players think in terms of numbers and charts rather than actual role-playing logic. Changing in a manner which helps support my Empty Room Principle.

To this end, I am attempting to take my own advice and stop hiding traps quite as cleverly. Even the best hidden traps in Ulin Uthor will have some tell-tale sign as to their presence.

Consider this, you are slowly walking through unexplored subterranean tunnels, known to be inhabited by the foul denizens of the Deep Down. Vigilant and wary, you have naught but a pair of dimly lit torches amongst you and your fellow delvers to light your way. At best, the lighting is flickering, shadowy and faint. Even a wide open pit in the tunnel ahead could take you by surprise. Some diabolical contraption on the ceiling overhead might go unnoticed amidst the shadows above. A somewhat crudely hidden pit, on the other hand, could certainly present a true threat. A trip-wire or a loose flooring stone might be nearly impossible to notice before tripping off it’s accompanying trap.

All of this is presuming that the delvers are indeed proceeding cautiously through the labyrinthine passages. If the delvers are in pursuit, or worse yet, taking flight through as of yet unexplored corridors or rooms, even plainly obvious traps might not be spotted in time.

The upper levels of Ulin Uthor are littered with pit traps, and trapped false doors. Depending upon the prevailing circumstances and the actions of the players, these may or may not yield clues warning of their imminent danger. I don’t necessarily need to include such clues in the keyed descriptions of the mega dungeon. Besides, many areas and levels of The Dim Expanse have stewards who routinely clean up such clues and warnings. Other traps within the mega dungeon have already had obvious clues written into the description. For example, scorch marks on the walls or floor, or pock marks and heavy etching near traps which release fire or acid.

An innocent pair of crossbow bolts, sunk into a dungeon wall, speaks volumes now. Perhaps it’s a clue that some trap trigger is nearby, or perhaps it’s simply the remnants of some melee fought within these walls in the past. This is not to say that as a referee, when designing your campaign, that you need to detail each and every trap in some complicated, logical manner within your written descriptions. If you enjoy such things, by all means it’s possible. I typically assume a loose floor stone trigger for traps that ‘fire’, a pull chain or spring mechanism on doors and chests, and counter-balanced trap doors above my pits. The level of detail and variety is left to the referee, to be preplanned, or invented on the spot.

This flexibility allows the referee to play D&D in an open-ended manner. The flow of the game and the decision making process is squarely upon the referee’s shoulders, and not determined by a roll of the dice. At times, the referee will certainly use dice to determine if the players have indeed seen such clues, but this is not determined by any hard and fast rules, classes, or abilities of the characters. It’s simply another story-telling feature in the referee tool kit, much like a Wandering Monster table, or ad-libbing.

Is this approach not in keeping with true old school OD&D? Perhaps not. In reading the LBB, one certainly gets the impression that the referee is often designing his dungeons in the most devious manner possible. Traps with no warning, save or die situations abound, merciless teleport and sloping traps intended to pit the delvers against overwhelming odds. All of this is fine, so if your particular campaign hosts players who are up to the task, go for it. In my experience, though, after the 15th unavoidable pit trap, the players begin to lose that feeling of realism, and the traps turn into an ‘exploration tax’, if you will.

Imagine if every Monster, or group of Monsters in your game sessions were invisible, silent teleporters, able to surprise the player characters upon each and every encounter. That would certainly get old after a while. Traps are no different. When you think of them in the same way that you consider encounters, this approach begins to make much more sense.

At times, you might want certain traps, or tricks, to be unavoidable. Teleport fields, for example. Such obstacles are perfectly fine, as they aren’t always directly dealing damage. Rather, these unavoidable features are waylaying and rerouting the delvers. Things like invisible death rays are perfectly fine, if you go for that sort of thing. Personally, I’d toss a few corpses in their path, though. Might the delvers still stumble into danger? You bet. At least there was a warning of some sort. Thinking along these lines allows the referee to dial the devious knob up or down, depending upon the situation. It’s all about referee control.

Whether you allow the Gygaxian Thief class or not, this obvious traps design theory will still engender more role-playing scenarios and critical thinking on behalf of your players. If a player in my campaign yearned to have a character who was mechanically adept, and well versed in the detection and removal of such devices, I would concede. Perhaps an Explorer class, or a Delver class. Something that a Dwarf might excel at, at the expense of combat prowess. Nevertheless, this character would NEVER be able to simply roll dice to detect, and roll dice to remove abstract, non-descript traps within Ulin Uthor. Such a character would need to role-play, and tell me what, how and why before attempting to get some class related bonus in his efforts to disable my traps.

A standard pit trap, with a pair of counter-balanced trap doors. This pit has a pressure plate at it’s bottom, which when activated, causes the trap doors to close, resetting the trap. Pretty standard fare. Now, let’s say a NPC adventurer fell into this pit recently. His adventuring mates, in their efforts to free their companion, attempted to pry open the stout trap doors using a spear. The spear broke, and the spear head is still firmly wedged into the edge or center of the trap doors. How obvious is this? That’s up to the referee. Also, it leads to other ad-lib possibilities…is the adventurer still there? Why was he left? Is he still alive? Worse yet, has he been turned into a Zombie?

A dead end hall after a turn in the passage greets the delvers. A recessed niche in the wall at the end of the dead end hall, 30’ beyond, houses a small iron lever. The lever is in the ‘up’ position. Both walls of the 30’ hall leading to the lever have a thin crust of decaying flesh, splintered bone, and matted hair. There is a distinct odor of rotted flesh here. How obvious these clues are is up to the referee. Levers are almost always too tempting to leave alone. I often go a little ‘lever crazy’ at times. Is this a typical crushing wall trap? Is there some reward for pulling the lever? Is there some Deep Down denizen snacking on the remains of slain delvers here? Is this such an obviously deadly trap that the delvers had better just leave it alone altogether? You’ll have to enter Ulin Uthor and steady your hand to pull that lever and find out.

I really enjoy such risk/reward type obstacles. Sometimes there is no reward, of course. What there certainly is NOT is a Thief reaching for his dice when he encounters such a hall. The real reward is for the players to stop and think, and for the referee to enjoy watching the interaction he has instigated with this obvious trap.