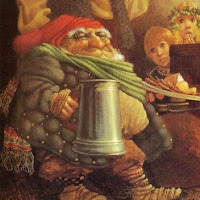 You know the old adage, good things come to those who wait. If such is truly the case, my upcoming campaign had better be damned good. If you’ve been following my blog, you know I’ve been spent the last several months gearing up for a new campaign with my old gaming crew. The crew that formed in the early 80’s. Yep, we’re all 40+ years of age, we have families, and we are scattered about Annapolis, Baltimore, Washington and Virginia. None of us has really ‘moved away’ per se, but we are certainly fairly far flung as far as table top gaming potential goes. There’s never been a reason to move away from this greater region, as it offers pretty much whatever you might seek in regard to career and family. For that I am thankful, even though I would personally rather be in a more remote, less expensive area with better weather and fewer cars.

Thanks to the wonders of the interweb, I have been able to track down those members who I had lost contact with over the last six to ten years. I think the last time the entire crew was assembled they were preparing to enter Akt-Elam’Da, the fabled Vault of Night, 1996 or thereabouts. After that a few of us would meet periodically for a diversionary dungeon crawl campaign, which ended in 2000 or so, I’d guess.

So, needless to say, it’s been a long time.

Well, the stars have aligned finally, and our first game session, to kick-off the Of Fortunes and Fools campaign in Solstice has been set for the end of June. I’m already considering more preparation I should take care of before then, but honestly, it’s ready to go. And you know that first session will be full of lots of BS’ing and only a little bit of actual dice rolling, as it should be.

If I had to guesstimate, I’d say I’ve been DM for over 250 sessions, in various forms. For whatever reason, I’m actually more anxious than I’ve ever been as a DM. I’ve no idea why, after all it’s my old gaming crew. I suppose I’m really concerned with making sure the campaign is entertaining for all involved, since we are all going through great lengths to actually play now. In the end, I’m sure as soon as the first d6 for damage is rolled, and the first saving throw is called for, everything will fall into place and run smoothly.

These sessions will be the basis of more than a few posts here at the Grog ‘n Blog, and they will also likely be the first games I’ve ever run while a laptop is sitting next to me. I’m hoping that my players will all share a laugh or two when the first total party kill occurs, and that these upcoming sessions will be regarded as good things by all.

~Sham, Quixotic Referee
Posted by Sham aka Dave at 12:04 PM