Junk From My Closet: Devil's Throne

This is the first installment of Junk From My Closet. Hat's off to Jeff for the idea. I can waste plenty of time scanning in old garbage and yacking about it, and...that's what I plan to do.

My first offering is an old map I dug up from my never finished Antholerin campaign. I'll probably find more Junk from that setting in the closet, but this is a map I always liked and I never used in actual play. Antholerin was a long running campaign, centered around multiple levels of 'undercities' which led, eventually, to the Deep Down, my version of Arduin's Great Wyrm Road, or the Underdark. The lowest reaches of the Deep Down were drawn out on a hex map, ala D1-3 inspired by Gygax's map, with keyed hexes. Devil's Throne was one of those hexes, in this case the hex directly under Antholerin.

Devil's Throne was probably drawn around 1995 or so, so it's fairly recent as far as most of the Junk From My Closet goes. 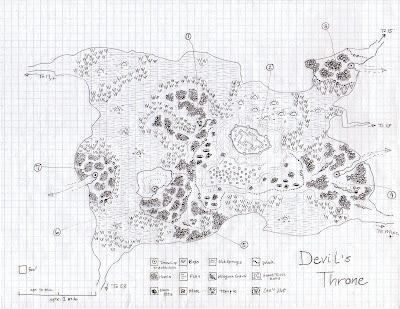 Devil's Throne is the legendary Trollhome. Within resides clans of Giant Trolls, Trolls, and Troglodytes, as well as the Great Troll Overlord. Here's a rough outline of the keyed areas.

Devil's Throne has eight Troll clans, totaling over 10,000 Trolls, and one Giant Troll clan of 600.

I can no longer remember, but some of the Temples might be named after Demons from Arduin.

This region occupied hex number 21 on the Deep Down overview. If I find that hex map, I'll scan it along with the other hex notes.

~Sham, Quixotic Referee
Posted by Sham aka Dave at 11:22 PM

Thanks for this! It's been saved into my maps folder for plundering later.

You're welcome! 10,000 Trolls might be a bit over the top, but since it's not detailed on the map itself, it's fairly wide open for customization.