REH, Pulp and Me 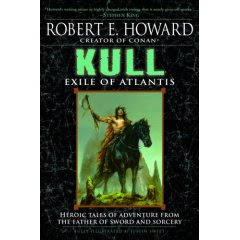 Most of you probably share with me a love of pulp fantasy in the Howard style. I find it rather interesting that most of the Grognards I rub elbows with across the interweb probably fall into the Howard camp more so than the Tolkien camp. D&D, of course, doesn't fall into any camp, and it's literary influences were simply generic fantasy as a whole. It took a bit from Tolkien, a bit from Vance, a bit from Howard, a bit from DeCamp, a bit from Leiber, a bit from Anderson, etc. All of these little bits blended together to form a somewhat generic milieu intended to get the creative juices flowing for other aspiring referees who also might want to host fantastic medieval wargames.

What we ended up with, ultimately, in AD&D, was an all-inclusive generic fantasy setting which eventually became the default D&D worlds, inspired by Gygax's Greyhawk, and later, Greenwood's Forgotten Realms. I'm a big fan of Greyhawk, and I appreciate the Forgotten Realms, but at the end of the day, both are somewhat generic melting pot settings of fantasy inspiration. This is not a knock on either, just an observation that both share many accepted D&D standards.

In the past, many game designers, authors and individual fans of particular settings and styles have indeed taken up the torch and molded D&D into more narrow settings. For example, the very first D&D game I ever played (not refereed) was a home brewed OD&D LBB campaign that was all Tolkien, all the time. It was a helluva lotta fun. Clearly, because I am still playing this silly game 30 years later, and can even recall quite clearly those first sessions.

Recently, I have rediscovered my fondness of Robert E. Howard, thanks in no small part to Del Rey books and their reissuing of Howard’s works in their original state. It began in 2003 with The Coming of Conan The Cimmerian. Recently I started reading the sixth such book in the series, Kull: Exile of Atlantis. I read (and reread) the three Conan books; The Coming, as well as The Bloody Crown of Conan and The Conquering Sword of Conan. I also thoroughly enjoyed Bran Mak Morn: The Last King, and The Savage Tales of Solomon Kane. I highly recommend ALL of these excellent volumes. I purchased all but Kull, which I grabbed at Borders a few days ago, from Amazon.com.

Back in the day, I loved the chronological Conan Del Rey paperbacks. It was great fun collecting them and reading them, and (in case you haven’t noticed) I love Frank Frazetta’s art. At the time, I didn’t realize that most of the stories within that long running series were not even written by Howard. Now, in reading these original works, it’s quite clear which of the stories were actually Howard’s own. They jump off the page and crackle with raw, visceral energy. I’m a huge fan of DeCamp, too, but he could never quite do Conan justice. In the end, the DeCamp and Carter fillers simply detracted from the real Howard stories. DeCamp was at his best with his Harold Shea series with Pratt. But that’s a topic for another post.

The new series presents Howard’s work in the order in which the stories were written, and makes no efforts to fill in the gaps or ghost write anything to make it into a complete life and times of Conan. If you aren’t familiar with the real Conan by REH, do yourself a big favor and read The Coming of Conan The Cimmerian. I’d bet that you’ll end up reading all six books. (Del Rey is also publishing other pulp works by REH, I think it’s his Westerns and Boxing stuff. If it’s REH, it’s probably good. But knowing what I know about REH, S&S was his love, the other stuff paid the bills).

This brings me to my recent interest in pursuing how I might incorporate my love of REH (and Lovecraft, too) pulp fiction into my D&D games. My two major side projects right now, No Future and Project X, are basically my dream of somehow blending REH and HPL into an OD&D campaign setting.

All of this has also led me to download and print an awesome stripped down version of TSR’s mid 80's Conan RPG called ZeFRS.

It might be just what the doctor ordered to plug into my No Future setting. But, on the other hand, you know as well as I do that I’ll end up opening my little tool-kit with those LBB and making my own house rules for D&D in a grim, gritty, low magic setting. If I can ever get my hands on the actual TSR game: 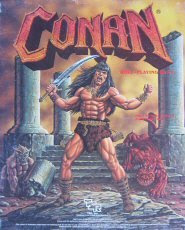 I'd be one happy fanatic.

~Sham, Quixotic Referee
Posted by Sham aka Dave at 11:08 PM

Damn it, what are you doing living on the east coast? Move to Texas so we can game! ;D

Seriously, that same vibe keeps creeping into my gaming. Magic as dangerous and otherworldly, the nations of the world rising and falling as barbarians conquer civilization, succumb to its decadence, and are in turn conquered by a new wave of barbarians, and greedy "heroes" eager to fill their purses, and are not afraid to shed a bit of blood in the doing of it. More and more, my kingdoms are shrinking in size, until some are mere city-states. My elves are turning into Melniboneans. My magic items are tricksy things, and demand payment for their powers.

If you haven't yet, I'd also suggest picking up Wagner's Dark Crusade. I'm also enjoying Joel Rosenberg's later Guardians of the Flame novels. I just finished Not Quite Scaramouche which, in spite of its title, has a wonderfully gritty feel to it.

Wow, must be the alignment of the stars. I have been re-reading the Howard stories myself and just downloaded the ZEFRS rules the other day too.

I want something without the fantasy races, more primal and dark. Good stuff.

Thanks for the comments.

@Brian: I won't Mess with Texas!

Just kidding about TX. I've been to Dallas, and I understand that Austin is the place to be out there. Just keep researching that Teleport spell and we'll have a campaign going in no time. Oh, and bring some real Tex/Mex food with ya!

Thanks for the book tips. I'll add those to my list.

I would really like to move away from the Tolkien feel in my setting as well. It's a lot of work, though. Or, a lot of wasted work, depending upon how you look at it.

My biggest problem is that most of my recent labors have gone into my mega dungeon, and it has a certain high fantasy feel to it. I'd have to take the proverbial wrecking ball to it in order to use it in a low magic S&S setting.

Although the more I talk about it, I might end up moving in that direction.

Man Stands Alone. But what about the Monsters...wuld there still be Goblins and Orcs?

Man Stands Alone. But what about the Monsters...wuld there still be Goblins and Orcs?

Man stands alone against the supernatural. So why not?

The Elric stories are certain Sword & Sorcery, but they break a lot of the "rules". Elric's no blue-collar rebel, but the emperor of a decadent empire. He's no brutish sword-swinger who is confident in his own strength, but a thin-blooded, vacillating sorcerer who must rely on drugs, magic and his cursed sword just for the strength to jog around the block. And his foes are as likely to be supernatural beasties as they are to be garden-variety humans.

Sword & Sorcery can embrace a wide variety of milieus. There's no reason the world can't be full of elves and dwarves and wizards, or even bipedal toads and dancing mushrooms. The key, I think, to Sword & Sorcery is the nature of the characters and their conflict with the world. Most specifically, the universe being a vast and uncaring place. This is usually seen most blatantly in the danger of supernatural powers, either as foes or as magic.

Which is to say, I think you could set a game during the high age of Melnibone, and have the PCs all be Elric's noble ancestors, and still have the game be true to Sword & Sorcery if the magic they wield is dangerous and the world they live in is callous and unconcerned with their desires or survival. Nothing is given to the Sword & Sorcery "hero" and they must wrest, by strength of sinew and wit, all they will from the world.

"The key, I think, to Sword & Sorcery is the nature of the characters and their conflict with the world. Most specifically, the universe being a vast and uncaring place."

Perfect. Man stands alone in my No Future setting idea. I suppose the underworld could still be some mysterious link to the past, even more so now. See, you've got me talking again, and considering it more and more. It probably wouldn't require too much cleaning up.

The whimsical fantasy needs to go, though...to be replaced by spiteful, greedy fae who see Man only as a reminder of their own dark past and their dwindling power upon this world.

Instead of helpful sprites or carefree pixies, these malicious fae are twisted, tormented shells of their former selves, driven insane by participating in fell rites in an effort to rediscover the old magic of Solstice. Addicted to the Rites of the Black Circle, seeking fresh blood to lure into the clutches of the fanatical worshippers of the Trembling Terror.

Yeah, I can work with that.

You've got me itching to reread my Elric books!

Both Kull and ZeFRS are topics I've visited lately. I read Kull a few years ago when Baen published their REH library of non-Conan material, and I purchased and read Kull: Exile of Atlantis a couple of months ago - oddly enough around the same time I downloaded, printed, and bound ZeFRS. It's not a perfect system, but it looks perfectly serviceable with a little TLC from a competent GM.

Thanks for the comment. The internet certainly makes you feel less and less like a special, unique butterfly, doesn't it?

ZeFRS. Will I ever actually use it? Probably not. Maybe I can yoink some ideas from it. It's a very well done community project, nevertheless.

I doubt I'll ever play ZeFRS either. But between that, and Mongoose's Conan, and Dr. Samsara's Swords of Fortune project, and the idea of prepped spells "leaking" power, I feel I'm getting closer to a notion of magic that is both wondrous and dangerous.