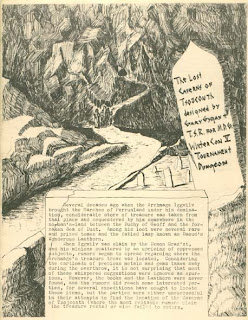 Here's an excellent post on Old School/New School from Grognardia, a subject which I touched on here last month.

There are some very well thought out topics in James' post. In particular, the actual usage of the somewhat tired phrase 'Old School', and what it means in D&D terms. In my own take on the phrase, I simply tried to classify, historically, what Old School means in D&D. James on the other hand takes it a step further and defines the actual meaning. For example:

"the mere existence of the term "old school" only highlights the discontinuity modern gaming has with its past".

"it's important that everyone recognize the central truth that it reveals: a rupture, at some undefined point in the past, between the origins of the hobby and what it has become today".

"this isn't about the superiority of one approach over another, so much as a preference for the older approach".

Good stuff, as always, from Grognardia.

Now, in my own hackneyed style, I was rather heavy handed and took a butcher knife, dissecting D&D's timeline in half, and calling anything before 2nd edition Old School, and anything after it, New School. In my own research and crude analysis, I didn't once mention that there was indeed a rupture in the very spirit of the game, and as James noted, it's debatable as to when or exactly how this rupture took place (unless you might also subscribe to the Dragonlance theory).

My take on things was strictly from a D&D standpoint. I know many do not consider D&D to be the end all, be all of role playing. And you are entitled to your own opinion, even if it's wrong. (I'm joking!).

I broke the term down further into schools of D&D, and I do believe that there are degrees of Old School within D&D. I still have a hard time embracing Moldvay or Mentzer D&D as Old School, but I admit that my take on things is based on personal interpretation. James takes the high road and puts things in black and white. It's about a definite change from Old to New. I would add that this change is not one strictly of 'story telling' philosophy, but also, and in my opinion sometimes more importantly, one of 'rules overload'. The result is that both factors have brought about a devolution of creativity. Or, some might argue, have resulted in more refined, better designed approaches. It depends upon your preference in the end.

In our own little D&D Grognard circles, there are certainly subgenres based on these differing opinions in regard to what's Old School, what's OD&D, what was the author's intent, and even down to the minute details involved in translating a vague passage in one of the original three volumes.

Let's face the facts, though. We all play D&D, or some derivative thereof. We can bash our heads against the proverbial gaming wall as we continue to create divisions and dump even more gasoline on the fires of edition wars. Or, we can admit that D&D and it's descendants have opened up a world of limitless possibilities. We are all fans of the role playing genre, and we are all for that matter sharing the same hobby we love so much. People like choices, and they aren’t afraid to stand behind their decisions, and to defend the merits of their preference. D&D has plenty of choices, and I would never begrudge someone’s personal preference in anything, whether it’s Candy Bars or Role Playing.

So, I agree in James' assessment that the term Old School should not be a derogatory phrase, but rather an acknowledgement of the changes that our little corner of the gaming world has witnessed.

I prefer Old School Snickers, though, for the record.

~Sham, Quixotic Referee
Posted by Sham aka Dave at 11:17 AM

As a Moldvay kid, I honestly don't consider my gaming "Old School", since I feel I was part of the "2nd Generation", the one that probably started the descent into the current state of corpulent rules and storytelling fervor. Still, even my way of gaming has been eclipsed, so I have a lot of empathy for those who cling to OD&D.

And I try to stay off their lawns. ;)

Let me voice my agreement with Mr. Rients, well said.

If I'm allowed to be a pedant, I'd peg Moldvay as third generation, with the first being the "pre-roleplayers" who played wargames before picking up OD&D. The second generation, to which I belong, are the guys who came afterwards, once D&D was becoming popular and started with Holmes or even AD&D, both of which predate Moldvay.

"so I have a lot of empathy for those who cling to OD&D.

As far as generations go, I'm like James, having started with D&D, not wargames. I'm a recent OD&D convert. Nevertheless, I'd still warn you to stay off of my lawn.

Well, I kinda base my generations on where you came from, or, rather, the majority of your peers. The first generation are those who were into the wargaming scene when D&D was developed, and who probably encountered the game in a wargaming context.

The second generation are those who came at the game without wargaming, but instead brought to the game all their Harryhausen and fantasy-novel expectations. I count myself among those, and find that we were less likely to use henchmen, and more likely to be annoyed by things like level limits and weapon restrictions.

The third generation are those whose expectations were shaped by computer games. The bizarre "game-isms" that bother the previous generation don't make them bat an eye, and they love their complex systems They much prefer quests that challenge the character rather than the player, and seem to be much more forgiving of "railroading".

Anyway, just another method of arranging and ordering that sort of thing. I like my method because it sometimes clues me in to what sort of expectations the player has towards D&D. It ain't foolproof, but it gives me somewhere to start when I'm offering advice or running adventures.

As for me, I'm rather happy to rediscover Moldvay/Cook in a new light, and then to attack it with a barrage of houserules that, I'm sure, many a grognard will find insane and insufferable. I'm afraid I just can't get away from my tinkering.

I tinker quite a bit myself. That's what's great, in my opinion, with the Old School D&D versions. I have room to tinker, and to make it my game, rather than allowing someone else to do that creative exercise for me.

Tinkering is a characteristic of Grognards, as far as it's meaning in D&D terms. The game encourages such house ruling.

I'm developing a D&D Principle which actually addresses this topic.

I'm not sure this is generational, or new school vs. old. It seems more to me that it's something certain gamers more than others are inclined to do. There is certainly no lack of tinkering and houseruling over at Enworld, for example.

That said, it sure is a lot easier to monkeywrench the old school games. I may never finish the epic level pseudonatural tirapheg wizard I've been half-assedly working on. But under Moldvay/Cook et al. it's not only possible, but legitimate, to simply wave one's hand and say, "Hey presto! Casts spells as a 10th Level Magic-User"

(n.b. speaking for myself only this may merely be a rationalization for laziness)

In regard to tinkering, I think what Brian was alluding to is that there is some sense that Grognards are strict, by the book players. While this is, I think, the intent of the original wargaming term for Grognard, it is not so for D&D. And that's because OD&D basically demanded, in the LBB, some crafting and addition in the form of house rules and home brew. In that regard, it is more open ended than any subsequent version. All Pen and Paper games will allow some form of tinkering, even 4th edition D&D.

As you said, though, it is easier to monkeywrench the old school games. There's more creative elbow room.

It is an interesting back-and-forth. On the one hand, you have the folks that don't want people to mess about with the rules too much. On the other, as has been pointed out, the older editions just scream for tinkering.

Above and beyond a certain loyalty to older editions of D&D, I think the essence of "old school" might be more in how one approaches the rules and what one expects out of them. But that's just me, and I have no respect for any sort of "purity" in rules systems. My poor B/X books are whimpering even now as I draw up a system for clerical spells based upon sacrifice and ritual...