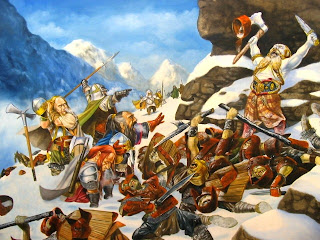 Here I present the last five of the 15 Rules Packets for What Price Glory.

There are five basic types of armor, and two additional protective pieces that may be used to supplement the basic armor.

Basic armor entails a chest piece or cuirass of one of the following types:

Each basic armor type is listed with it’s base AC, without Armor Kit, as well as it’s Absorb Value. When the wearer of one of these armor types sustains a Critical Hit, the number shown is the amount of bonus damage absorbed by the armor (Leather never has any Absorb Value, even when magical in nature). Each magic ‘+’ adds 1 to this amount. If using the Critical Hits rules packet, a roll on the Critical Hit Table indicates that the Armor has a chance to be damaged and in need of repair unless an item Saving Throw is made. The Saving Throw required is a 16, adjusted by each magic item plus. If missed, normal non-magic armor is damaged and in need of repair, while Magic armor will lose a single ‘+’. If +1 magic armor is reduced to +0, it looses all of it’s magic and is considered normal armor. The referee might take into consideration the location of the Critical Hit (if such a specific system is used) and allow the damaged piece of armor to be a part of the Armor Kit, say a Helmet for example.

Armor Kit: An Armor Kit is a set of three protective pieces (Helmet, Greaves, Bracers), all three of which must be used to gain the full +1 to AC.

Cloven Shield Rule: (I credit Trollsmyth for inspiring this house rule) When damage is rolled against the user of a Shield, he or she has the option to declare that they will be using the Shield to negate the damage. The Shield is shattered and useless unless an item Saving Throw is made. The Saving Throw required is a 16, adjusted by each magic item plus of the Shield. If missed, a normal non-magic Shield is shattered, while Magic Shields will lose a single ‘+’. If a +1 Shield is reduced to +0, it loses all of it’s magic and is considered a normal Shield.

This Rules Packet assumes the Solstice Weapons guide, with the following changes:

Weapons with Reach: Pikes, Lances, Pole Arms, Halberds, Long Spears, etc, have the advantage of Range over shorter weapons. Standard Spears only have this advantage when specifically set or braced to receive attackers. A successful hit by a Weapon with Reach allows the combatant to Fend with Reach against a foe using a shorter weapon. A foe who has been Fended with Reach will not be able engage that particular opponent this round. As soon as the wielder of the Weapon with Reach misses, the opponent may engage and attack him or her normally. Weapons with Reach may not be used while engaged. This range is considered to be six feet, and any opponent within 5 feet may not be attacked by a Weapon with Reach, except in the case of standard Spears. Weapons with Reach also allow a combatant to attack from the second rank, hitting an ally’s target by using the length of the weapon to his advantage. Pikes and Lances are too long for most dungeon encounters, but Halberds, Pole Arms and Long Spears are able to be wielded effectively in such close confines provided the referee allows it.

Tactical Rules are modifiers to combat situations which may occur during an encounter.

Flank/Side Attacks: +1 to hit.
Rear Attacks: +2 to hit.
Target Prone/Fallen: +3 to hit.
Target Defenseless: +4 to hit.
Blind Attacks: -4 to hit.
Attacking Downhill: +1 to hit.
Attacking Uphill: -1 to hit.
Mounted vs. Foot: +1 to hit and damage.
Foot vs. Mounted: -1 to hit and damage.
Target Outnumbered: Attackers at +1 to hit for every attacker over 1, up to +3 at 4 attackers.
Overwhelmed: Being attacked by five or more targets. If a man-sized target is surrounded and being attacked by five or more man-sized opponents, that target will become Overwhelmed in 1d3 rounds unless the situation changes.

This is a collection of actions which a combatant may attempt during an encounter. Many of these options are only available if the combatant has gained Initiative, and elected to wait, or ‘Hold Initiative’.

Move:
Engage: Standard move to enter melee.
Charge: Headlong rush into melee. +1 to hit and damage at end of move.
Disengage: Foe gets free attack at +1 to hit.
Double Move: Forgo Action to move twice. The second half of this move is performed during Melee.
If Initiative was Held:
Intercept: Halt target’s move by engaging it before move finished.

Stance: Stances are used in lieu of actual movement, and are actions taken to prepare for melee.
Evade: +3 AC, no attacks. Requires 5’ of space behind and to both sides.
Guard: Requires Shield. Confers +1 AC to adjacent ally. Does not stack with ally’s Shield.
Brace: Requires Pike/Spear/Pole Arm. +1 to hit. Deals x2 or x3 damage vs. Charge.

Melee Options:
Attack: Standard roll to hit.
Feint: +1 to hit, -1 to damage.
Kick: +2 to hit, deals 1 damage.
Slam: Shield attack, +3 to hit, 1 damage, man-sized foe pushed back 5’.
Head Butt: Man-sized humanoid targets only. -1 to hit. Target must Save vs. Poison or lose next attack.
Disarm: -2 to hit, no damage, target must Save vs. Poison or drop weapon.
Dual Wield Attack: -3 to hit. Can attack once with each weapon.
Sunder: Two Handed Weapon only. +1 to hit and damage, lose next attack.
Sweeping Blow: Two Handed Weapon only. Sweeping arc can target up to 3 adjacent foes, -3 to hit.
Swap: Weapon/Item requires 1 attack.
Retrieve: Weapon/Item requires 1 round.
Use Item: Requires 1 round.
If Initiative was Held:
Riposte: +2 to hit after a miss by foe.
Block: Shield only. Roll higher on d20 than attacker’s RTH to block attack with Shield. Uses 1 attack.
Parry: Roll higher on d20 than attacker’s RTH+2 to Parry attack with weapon. Uses 1 attack.

Grappling attempts require a hit for 0 damage. Defender receives a free attack at +2 to hit, if successful grapple attempt is fended off.

Ignores armor. Weaponless or with Dagger. Grappling is fast and furious, each combatant rolls 2d6, adjusted as follows:

The grappler with the higher roll deals 1d6 damage to his foe. Any roll of 10 or higher will deal 1 damage, added to the winner’s roll, or sustained by the winner. Strength of 15+ and Daggers will add 1 to this damage roll, for a total possible damage range of 1d6+2.

A man-sized target may be grappled by up to four man-sized foes at once. Each will roll 2d6 and take the highest result.

Packet 14 is too heavy at this point, but rather than break it up into 10 smaller packets, I will leave it as is to allow referees to pick and choose any of the options they might find useful in their own campaigns.

~Sham, Quixotic Referee
Posted by Sham aka Dave at 12:21 AM

Max said...
This is fascinating stuff, Sham. Much of it is probably more complex than I'd prefer (he said, preparing to play 4e with a new gaming group ;D ), but I hope you'll post playtest reports to let us know how you and your crew like running the game with these rules.

Question: Do you mean for hand-to-hand grappling to be as lethal as weapon combat? Can it affect VIT as well as FHP, to use your terms? That would seem sensible to me for HTH.

On the other hand, in the Conan story I was reading just now a guy gets punched so hard it breaks his neck, and that's wicked raw. So perhaps only fighting-men can do lethal grappling damage?

I must admit that perhaps I bit off more than I could chew with this undertaking. I seem to be sinking into depths of complexity that I never intended. I do indeed intend for Grappling to be deadly, but I might add further rules to allow for subdual once a certain amount or percentage of damage is done...or allow characters to sustain nothing more than FHP damage, and become unconscious once VIT is all that remains. I haven't sorted that out just yet.

I'll be looking to add seven of these packets to my campaign from the very beginning (more on that later) and I will be sure to post reports on who liked what and why, or who hated what and how.

Yeah, you've got some great tactical goodness here, but a lot of crunch, too.

Woohoo! The Splintered Shields rule continues it's conquest of the D&D world! I shall not rest until that rule appears in the 5e PHB! *cackles with megolamania*

I like what you did with it, too. I also like the damage to armour rules, and if limiting the amount of dice rolling wasn't an emphatic goal of my M/C/LL hack, I'd probably adopt it happily.

My goal was to keep the packets rather light, but my mind can't accept leaving out the possibilities of a particular topic. I ended up with some packets that are little more than a single rule, and others that are entire dice rolling/modifying conventions.

I hope to further streamline all of this into legitimate light packets.

I love the shield house rule, Brian. Even though I've crunched it up a bit, it's still simple and elegant.

Clearly this is an ongoing project, but since I thought of taking it on I've been mulling ideas around...and for me the best way to get something like this worked out is to start writing it all down.