Junk From My Closet: The Donjon

Since this is a good week for me to throw out such lazy posts, I'll continue with more stuff I worked on in the past. With that in mind, here's another one gathering dust in my basement gaming closet of oddities from yesteryear. This isn't quite as old as the ALL CAPS pieces. This map was the next to last level in the dungeon Sham's Furnace. The Donjon was, essentially, my version of S1: Tomb of Horrors in that it was chock full of deadly traps, with only one or two actual monsters. I recall that running this level was a great deal of fun. 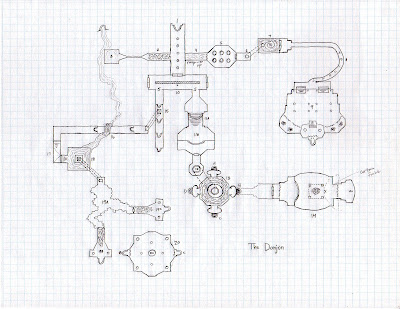 I'm not sure where the notes are, but I think room 9 required a pair of keys to activate the portal which lead to the lowest dungeon level. You can see the keys drawn on the map in rooms 14 and 20. It looks like a computer game map, heh.

Like all of my 'best' maps, this level had some water flowing in it. This would've been from my never finished Antholerin campaign, circa 1996 or so. The same campaign that I drew the Devil's Throne map for.

~Sham, Quixotic Referee
Posted by Sham aka Dave at 7:58 AM

Very nice. Any idea what the square, squiggly bits in area's 2 and 19B and C is?

Thanks, Brian. Yep-those are magical glyphs/runes that are painted on the floor in those areas. I think almost all of the traps on the level were of the magical sort. What they did, exactly? I can't recall, but they were activated as an individual passed over them.