The Game Within The Game 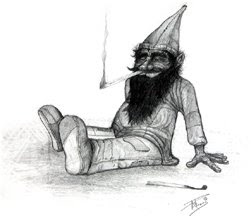 The following is a copy and paste of an email I sent out to my gaming group, as a prelude to Saturday's game.

Your old High School buddy Dave has invited you and a bunch of your old pals over to his house for a day of gaming and socializing this Saturday. Over the past few weeks, he has been emailing you with details and snippets about some strange old game he wants to try, called Dungeons & Dragons. You are beginning to grasp the concepts within these messages, that this D&D, as Dave keeps calling it, is a game using pencils, paper, and imagination. Dave is going to referee the event, which he has promised will be a good time and might last all night, and then be continued in the months and years to come. It’s a strange concept, but one which you have found to be oddly intriguing.

You see, the D&D Phenomenon of the late 70’s-early 80’s never happened. By some strange twist of fate, the game never expanded beyond the borders of a small tight knit war gaming club in the Midwest. Two of those members got together and printed the collected rules for D&D, and planned to ship the boxes off to a local hobby store, but something happened, and the boxes never saw any retail release. So, no one has ever heard of this old gaming club publication called Dungeons & Dragons.

Earlier this year, so he claims, Dave found a shipping box, (still holding the address label with it’s smudged return address somewhere in Lake Geneva, WI.) at a rummage sale. This box held a dozen little wood grain boxes, each containing a copy of the D&D rules, Vol.s I-III. Apparently Dave has become quite engrossed in this unusual game after dropping a few bucks on that lost shipping box, as he claims to have spent hours and days ‘making his campaign’, whatever that means.

Each of you will be receiving a copy of Vol. I, Men & Magic, as well as a handful of funky dice that Dave was able to purchase on eBay from a member of that old Midwest gaming club. Saturday is approaching, and promises to be, at the very least, an interesting day of discovery and fun. Dave explained that Volume I is all you need to play since all of the rules are found within, and at 34 pages long, it’s already complicated enough. Besides, he mentioned something about the other two books having too many secrets that might ruin the game for us. Just more of the weird stuff coming from Dave’s emails lately.

Forget everything you ever knew about D&D. The above is The Game Within The Game in which we are playing. This is my approach to this upcoming campaign, and I trust that playing this way will allow us to enjoy games of D&D in an entirely different manner.

I still might ‘discover’ other lost nuggets of Midwest gaming history, like the Judge’s Guild Ready Ref Sheets, but not much else will be used, simply because the D&D explosion, of which all of us were involved in, simply DIDN’T HAPPEN! There was no game like this before or after, and D&D shuffled off into obscurity. Let’s explore it’s possibilities now, when taken in this context.

So, with 8 extra copies of my Men & Magic PDF printed off, folded and stapled together, and a big bowl of funky dice, my game table will be waiting for Saturday and a bunch of willing victims to try out this old, obscure game, Dungeons & Dragons.

~Sham, Quixotic Referee
Posted by Sham aka Dave at 9:09 AM

Very cool. So you're running a fantasy rpg within an alternate history rpg. Have fun!

Thanks! My intent is to 'clear the table' and encourage the players to stop thinking in AD&D or other edition terms, and actually grasp the OD&D rules. We'll see how it goes.

This is a good idea, because it can encourage players to stop thinking in gaming terms when playing their characters.