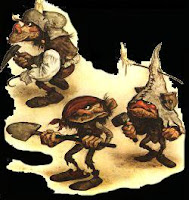 With my desire to push forward with the Entourage Approach for my upcoming campaign, I realized I needed to provide plenty of potential hirelings for the players prior to their actually departing for adventure. So I rolled up 34 such NPC's, who are waiting patiently at the Crook and Cabbage in the North Tower of Bend. Yep...34 1st Level adventurers hanging out in a pub waiting for some would be heroes to cough up some coin and drag them along on missions into the mythical underworld of Ulin Uthor, the Dim Expanse.

Not very realisitic, but these are the levels to which we must stoop in order to provide fodder for seven Entourages.

In fact, not all 34 are in the Crook and Cabbage at the same time, but they are in and about the North Tower, and potentially available for hire. Rather than have the players actually spend time searching for and role-playing with each and every single possible hireling, I am going to simply tell them that in the weeks prior to thier first excursion, each of them took the time to do just that, and here's a list of the NPC's to choose from.

I will of course roll Reaction and Loyalty, and record information in my referee notes when they do hire such individuals, but I don't think my players nor I want to spend three hours hearing me make funny voices before they can actually get down to rolling dice and exploring Krawl's Pace, the upper most region of the Dim Expanse.

So I am going to provide them with the following list, and let them hire directly from it prior to play. Granted, at 100 gold a pop, some of them won't be able to afford a hireling for the first few excursions. Nevertheless, here is the list of the 34 rabble-rousers hanging out and swilling cheap ale at the Crook and Cabbage:

I love character names. They're one of those little intangibles that end up adding so much flair to D&D. I think Gary Gygax had a knack for inventing names when he wasn't using jumbled or altered real life names of himself, his friends and associates.

You'll notice female hirelings in there as well. Maybe I've matured a bit as a referee, but I never used to include female henchmen, and my players never played anything besides men. Is that odd? I'm not sure, I honestly never thought that it possibly might be until now. I do believe that MMO's contributed to me overcoming any such possible prejudices I might have had in the past, consciously or subconsciously.

You might notice that there is a theme to the Elf names in Solstice, an idea I have unceremoniously yoinked from the always inspirational poster at the original D&D Forum, Driver, to quote a blurb he made a while back:

Most NPC Elves will have stereotypical "Treebow" type names, e.g., Darkblossom, Mossmarsh, and so forth. The default NPC Elves in my campaign are closer to creepy folklore Elves than Tolkien Elves.

Anyway, many might find these names silly, ridiculous, awesome, or mundane. I find D&D vastly more interesting when the inventor invests even just a wee bit of time creating such names. Based on the dangers present in the Dim Expanse, I do believe that many of these hirelings might end up as Player Characters before the first session is over; so the names of these hirelings had better be ones I'll enjoy seeing in the months to come.

~Sham, Quixotic Referee
Posted by Sham aka Dave at 8:17 PM

These are the kind of names I like -- colorful but not distracting, just goofy enough without being parodic, resistant to the urge to deploy random apostrophes hither and dither.

Have you seen Chris Pound's Name Generation Page? I just discovered it looking for a list of names from Jack Vance's books. Some fantastic ideas there.

(Of course his brilliant Vancian spell generator kinda steals the thunder from a post I'm planning, but ah well...)

Max, you're a font of knowledge. I've bookmarked that link. From one Chilton (Big Star) fan to another, thanks!

I love the names. Scrimshaw sounds like one dangerous broad.

Do the PCs decide on the personality of the hirelings, or are you handling that until such a time as an NPC becomes a PC?

I've always been a huge fan of the hireling tables Gary put together for the 1e DMG, so I'll likely use a few of those (but not ALL), something like a roll on each of:

This has always been one of my favorite collections of tables, and it's easy to remember where to find it:

As far as the Entourage Approach, I am letting them handle everything for both the Primary Character and the Loyal Follower. After that, they might end up using a Henchmen as PC. We'll see how it plays out.

Quake before the wrath of MIGHTY BUCKET!

Yes, I too have a soft spot for MIGHTY BUCKET.

I imagine him correcting people all of the time..."That's Boo Kay" sorta like the actress in 'Keeping Up Appearances'. 'Course, it doesn't have the ring of MIGHTY BUCKET.

There was a brave fighter called Bucket
Who faced all foes with great pluck
Yet when faced with a dragon,
his courage was flaggin'.
"You don't pay me enough, so f%#$ it!"

I hadn't considered that Mr. Bucket might be from Nantucket. :-)

An interesting mix, some great, some less than so...these would be some favorites of mine.:

Any reason why there are so few Human Fighting men to so many humanoids overall?

I'm glad you liked some of them, Cole.

In regard to the number of Human FM, I was trying to make a balance of classes and races. Since the majority of Dwarves and Hobbits are FM, the Humans ended up filling other roles.

I hadn't thought about which were my favorites, actually. I like these four: