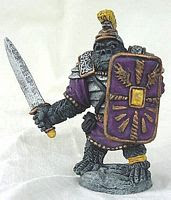 I know everyone was saddened to see the end of Friday Flashbacks here at Ye Auld Grog 'n Blog. That short-lived series of seven posts generated a whopping two comments along the way. People apparently aren't coming here to share my appreciation of late 70's/early 80's bands.

I also think that people aren't coming here to read my hackneyed commentaries about old school D&D. I've put my soapbox away for now, as I've said about all I care to say on the subject. Let's have a big Group Hug, all you fans of D&D.

I'll leave the reporting and commenting about modern D&D to other bloggers who care about such things while I remain holed up in my man cave trying to remain gleefully ignorant and disassociated.

What I'd like to continue doing here is thinking out loud in regard to ideas and concepts for D&D and specifically for my own campaign. The D&D notions I throw around here are meant to be perfected with input from readers. Feel free to slice and dice these thoughts when they are clearly over the top, off the wall, or just plain silly.

I'll also scan in some more Junk From My Closet soon, as well as some more Map Design stuff. By July I'll be able to post interesting (hopefully) blurbs about my Of Fortunes and Fools campaign. I have a pair of other projects I've been mulling around that will meet the light of day here before I can call them 'finished'. These being the No Future setting, and my Episodic Fantasy Campaign thingy that hasn't even found it's way into written form yet.

What Price Glory is an example of my thinking out loud approach. I hope to fine tune those house rules via reader input and actual playtesting. So don't take anything I essentially blurt out as a finished work. I like to think that affairs such as this will take on a life of their own as they evolve into a completed, satisfactory state.

My Dim Expanse series has stalled, primarily because I've not worked on Ulin Uthor much at all of late; there's enough there to launch the megadungeon now. I hope to continue writing about my design process on that project which will likely turn into a years long effort.

I'm excited about continuing to work on submissions to Fight On! and the upcoming Swords & Wizardry fanzine. I encourage everyone reading this to consider writing and submitting their own works as well. It's great to know that there are others out there who might share your gaming philosophy and appreciation of stuff you invented.

I'm also planning a new series entitled simply 3d6. What's it about? I don't know yet, but I like the title. I almost wish it was the title of my blog, actually. Yep, that's the kind of 'throwing crap out there' guy I am at times.

So I'll throw this out there as well: Please see the poll I'll be posting in a bit and chime in.

Furthermore, thank you all for the past 14 or so weeks! I'd like to ask that you continue providing input and comments to guide me on my way as I attempt to use this blog as a means to toss around concepts and ideas for the greater gaming good.

~Sham, Quixotic Referee
Posted by Sham aka Dave at 4:25 PM

1. Where did you get the awesome illustration of the adventurers carrying Gygax's coffin? That's probably the best tribute pic I've seen.

2. I'll continue to read your blog no matter what you post here. I'm one of those "too damn lazy to comment" types, but I do drop in here on a regular basis. And 3d6 sounds cool.

Thanks, Brian. It's been sitting in my hard drive for over a month, that drawing. I just couldn't figure out how to use it in a post as I discovered it far too late for a Gygax tribute post. So I think it has a nice home now.

I guess I'm a bad blogger, since I nicked it while surfing, and can't remember where it came from.

It's titled Gygax_burial, so I did a Google search for Gygax Burial. No luck, sorry. My apologies to whomever created that fine piece of art.

I did find out the following tid bit while looking:

Designer of Pringles can is buried in his invention.

So I guess it was worth the short time I wasted trying to find the source.

Maybe someone else has seen it and knows the source...

Is that an Ape Praetorian? That's great!

Sham, you seem to be going through a bit of a crisis of confidence, based on both this post and some of the comments you made in the last one.

Please allow me to be one to offer you, with all the warmth, admiration, and comfort I can muster, the following advice.

Your blog is a wonderful and entertaining resource, and your thoughts are valued not only by myself but by many others who probably don't bother to post. Please don't try to measure interest (or, as it really seems like you're doing, the overall value of your blog) by the metric of the number of responses you get in the comments. Hell, I don't comment in 1% of the blog posts I read, but that doesn't mean I don't read them, and enjoy them, and find them fascinating.

Your blog should be about what YOU are interested in. Talk about 4E! Talk about the Bangles! If only one person reading your blog reads those posts, it's worth it. I'd say it was worth it even if they didn't read it.

I, for one, would like you to continue posting about old-school bands on Fridays. There's a definite connection, at least in my own mind, between the music I used to listen to all night long while painting miniatures and playing solo games of "Tactics II". Perhaps there's a nostalgia factor at work, but there it is.

Please accept my most humble apologies if my attempt at humor in this reply was a little off-putting, but it's born of affection. This is your blog, not ours. Never forget that.

Hey-thanks for the comments GG.

Naw, not so much a confidence thing, I'm just very critical in regard to my own works. I felt that I've rushed a few projects through this space, and I wanted to clarify that I'd love input and comments.

Do I care what others think? Yeah, that's just me, always has been. I'm too old to change now.

You're right, it is MY blog, but I've always felt that the music vids might be a bit too off topic for readers.

As far as not talking about old school, or 4E: I've talked old school theory into the ground, and I have zero interest in modern D&D. I'm done with those topics (have been for a lil while).

This post was born of me realizing how much my blog has changed in 14 weeks. I just started writing crap one night, and now I find myself here. It seems like it started years ago, but it was just at the end of February.

That said, your comments made me laugh, but trust me, this little nook of the interweb I've carved out isn't going anywhere. I'm just gathering my thoughts and laying the foundation for the next 14 weeks.

I'll admit you've pegged me on the comments bit, I do judge a post by the comments I receive. I stand corrected and thank you for pointing that out! And even commenting about it.

Yeah, comments are a bad measure of what folks find interesting. I'm not sure what is, so I long ago gave up on that and just write about whatever's interesting me at the time. I leave comments on stuff I don't link to, and link to stuff I don't comment on, and am inspired by stuff I neither link to or comment on.

And I'm considered by most measures to be reasonably mentally stable. ;p

I read your blog daily because you update daily (or close to it), your imagination works in ways that are very, very different from mine, and your enthusiasm for the games you talk about is infectious. Plus, you're plugged into this odd, grognardy circle of bloggers, another echo of ideas I'm kicking around in my head, similar enough in theme to be recognizable, but different enough to be inspirational.

Quick tip: in case you didn't know, you can change your blog title! Shams3d6.blogspot.com is available...

Thanks for the tip, but I'll keep the Grog 'n Blog. Maybe someone reading this can take up the torch and start a new D&D blog titled 3d6. I might add it to the subtitle or sumthin. It just struck me as a no-brainer for a good D&D blog title.