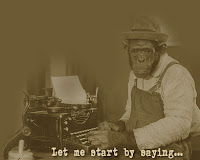 1. Not Blogging - Sorry for the lack of real posts the past few days. I’m in the midst of a handful of projects that have managed to detract from my normal incessant rambling.

2. First, as you might know, is a mega dungeon level submission for Fight On! The first draft is nearing completion.

3. I also volunteered to make a map for another author’s level within The Darkness Beneath, which still needs some details and notations.

4. Two possible submissions I am considering for Fight On!, the Entourage Campaign Approach, as so kindly suggested by some of you, and the

5. Episodic Fantasy Campaign (something new which borrows from the Entourage Approach).

6. I’m also considering putting together an adventure for the Summer Adventure Contest (undecided at this point, time is an issue).

7. Solstice has been revised again, borrowing some ideas from posters at the OD&D forum in my efforts to make it a darker, more sinister setting.

8. Wrapped around all of this is my continued thought process for No Future and Project X.

9. And, last but not least, my impending first D&D session is actually scheduled now, so I’ve been doing more background work for the Of Fortunes and Fools campaign. Little things like rolling up and naming 34 potential Henchmen for all those Entourages I’ve demanded the players build.

And that’s just the D&D junk that is keeping me busy, add in two golf dates and a fishing trip this week, and, well, Sham is taxed. Happy, but taxed.

I will toss out some changes I’ve made to the Entourage Approach:

In Solstice, the standard Henchmen Fee is as follows: 100 GP hiring fee per level of Henchmen, and one quarter a share of all gold plundered on adventures.

Not 5 GP, and there is no retaining fee. It’s a one time hiring fee, and the promise of more gold during adventures. This is by the book. Originally I felt that the cost would need to be much lower in order to allow an Entourage at 1st level, but Loyal Followers are gratis, and that’s enough to get things rolling.

Also, I’ve added this rule for my campaign. It’s nontraditional, so I’ll make it a suggested optional rule if I submit it at all with the Entourage Approach:

Players are encouraged to name their Entourage, to give their possibly transient character base an identity. For example, House Hartman or Clan Claudy might be appropriate. Some sort of identity is important, because during the course of play, an Entourage might earn and accumulate Style Points.

Style Points are awarded by the referee under certain, special circumstances during play. A particularly heroic act, a fantastic piece of role-playing, a completely newfound method of death, an act of comedic value that even makes the Monsters giggle, or, having a Kobold Primary Character.

How exactly an Entourage cashes in Style Points is up to the player. If used during character creation, the player will be allowed to spend a point, and swap the position of two abilities. Or, add +1 to an ability. If used when rolling hit points, a player will be allowed to spend a point and roll over, taking the highest result. If used during play, a player can re-roll a saving throw, or a roll to hit, or pretty much any single die roll, taking the best result. If at anytime an Entourage manages to accumulate 10 Style Points without spending any, it can claim Lordship over the group for one gaming session. What this entails is not entirely defined at this point, but will probably include such things as deciding what toppings are on the pizza for that evening.

Crazy? Perhaps, but it’s the kind of behind the scenes goodness that I think my players might enjoy, and it rewards role-playing and originality.

~Sham, Quixotic Referee
Posted by Sham aka Dave at 5:03 PM