Junk From My Closet: Egal's Pit

Here's a short background blurb in regard to an adventure my old gaming crew undertook to recover a long-lost artifact. Notice the ALL CAPS phase has ended. I'd date this piece circa 1988 or so, during a different campaign than the ALL CAPS stuff. The dungeon was called Egal's Pit, and all the party knew was that it was rumored to be the vault within which the Silver Chalice of Life was hidden. The Chalice was a magic item from one of the Arduin booklets, which I used as an artifact in my campaign. It provided eternal life as long as it's owner drank from it each night (essentially, the user didn't age at all during the following day after having partaken in the Chalice's life preserving magic).

The dungeon had been designed by Egal to keep out the Prince of Deception and his demonic minions, in order that he might remain reclusive, never aging, and continuing his sorcerous research and studies for all time. Needless to say, it was a well protected dungeon. As it goes on to say, the Demon Assassin accomplished his mission, sending Egal's soul to it's rightful owner. Then, the Demon was ordered to remain and guard the Chalice.

The Demon Assassin was indeed waiting in ambush in the vault, and provided quite a nasty surprise for the brave dungeon delvers, precisely when they were about to nab the Chalice from the depths of a well-built anti-Demon dungeon. 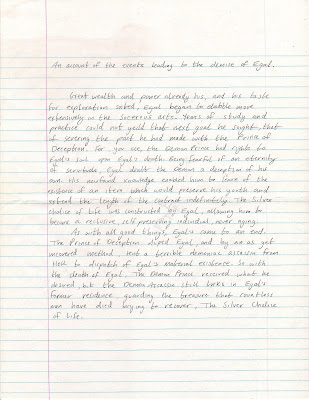 As to the Chalice itself? Silly eternal-life magic is often lost upon players in a D&D campaign. It sat for months in John's Portable Hole. John, I apologize for spilling the beans all these years later...BUT! John's character secretly SOLD the Chalice on the black market for a princely sum. All of the other players had forgotten about the Chalice, and never (until now-if they are reading this) knew about what John's devious character did with it. I can't remember the exact selling price, but it was truly a fortune in rare gems. I'm fairly sure John's character blew it on wine and women.

~Sham, Quixotic Referee
Posted by Sham aka Dave at 9:16 AM