Trials and Tribulations of the Delinquent DM 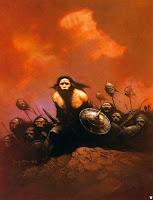 I finished stocking two full maps of the Krawlspace region of the upper level of my mega dungeon, Ulin-Uthor last night, using my refurbished OD&D Monster and Treasure Distribution tables. So far, so good. It looks as though I’ll have level one completed tonight or tomorrow.

I can say one thing about Krawlspace, it’s a real meat grinder. What started out as a ‘buffer region’ for newbie PC’s before they had the misfortune of stumbling into the Goblin controlled areas of Lahromil’s Demise has evolved into a two map dungeon crawl that could probably be challenging for the players through third level.

I think my Solstice, Bloody Solstice dead character file will be bulging with deceased PC’s before long. I’ve never been a fan of Save or Die situations, but they seem to be standard fare in OD&D, and as such I have added plenty of deadly traps and poisonous monsters. Careful play will go a long way, but sometimes shit happens.

I’ve made assumptions like this in the past, with what I thought might be nearly impossible adventures, only to see the PC’s pull a rabbit out of their collective hats, time after time, so I will be moving forward at full speed with Krawlspace as written. Let the dice fall where they may.

In the true spirit of mega dungeons, I still need to complete level two, and flesh out areas of level three before the PC’s dive in and possibly enjoy a non linear feel to the dungeon crawl. That said, as of right now it is open for business. It’s been a labor of love bringing life and character to this mega dungeon, and the workload is really just beginning. The 291 keyed areas of level one are all typed out and described in an archival format, and the monsters and treasure are handwritten on index cards and stored in a card file for easy access.

During the creation process, I’ve been using these index cards for prewritten wandering monsters, rooms, room inhabitants, treasure, individual magic items, NPC’s, puzzle pieces, riddles, etc. I don’t know why I never thought to use index cards this way before. All of the defeated monsters and looted treasure will be stacked neatly on a session stack, for easy reference post gaming sessions. Restocking the dungeon will also be a breeze using this method, as I will never have to alter the archival, typed version, simply cross out and refill information of the individual room cards. More on this system once I actually apply it during real games.

This brings me to the topic at hand. Actually gathering my old cronies together for these gaming sessions is proving to be difficult. I have only myself to blame, for letting D&D fall by the wayside for a decade. I got sucked into too many other gaming diversions, Diablo 2, Magic the Gathering, Dark Age of Camelot, World of Warcraft, Lord of the Rings Online, etc. Essentially, MMOs and CCGs did me in. Through these years of instant gratification gaming, I did come to the realization that I am an obsessive gamer. I get sucked into one game or another, and end up neglecting all other forms of gaming while I focus on the game of the month, or year in some cases.

Well, I have come full circle back to the roots of my gaming past, and I am loving every minute of the design process for Solstice and Of Fortunes and Fools.

As a Dad, this is better for family life anyway. I can work on the campaign and dungeon at my own pace, and I don’t find myself asking where the last four hours went as I’m plunking away at leveling some MMO character, day after day, trying to ‘keep up with the Joneses’. I doubt I’ll ever play another MMO. Don’t get me wrong, I had a blast most of the time, but the time investment is insane with these game forms. After years of being an MMO addict, I have come to realize that the only benefit is the social aspect of the online community centered around the games themselves. They are, after all, glorified chat rooms that let us waste time better spent doing something creative or family oriented, or *shudder* something outdoors…oh, the horror.

So then, here I sit realizing that I, being the DM, organizer and designer and basically Head Honcho for my gaming group, am the one to blame for this predicament in which I now find myself. In a nut shell, here’s where I am right now, with a shiny new mega dungeon waiting for delvers to dare the treacherous tunnels and hidden shrines within, wondering if in fact I will ever be able to gather my old gaming buddies together again. Wondering if in fact I am simply whistling in the wind and wasting my time again on a different form of gaming.

Ah well, it’s not all bad, I still don’t waste all of my time sitting in front of the TV.