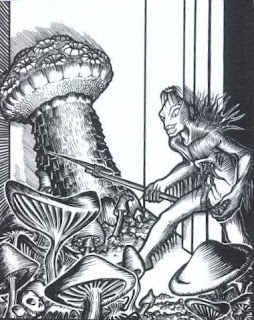 An idea which I am going to slowly develop and allow to grow is the notion of a “Pulp Nexus” of sorts in the Deep Down. The idea began with visions of archetypal pulp ‘monsters’ crawling within Ulin Uthor, somewhere in the nether regions, deep enough that I can allow this whacky idea to evolve into something fun but not too campy or out of place. Well, by nature it will be out of place, but that’s sort of the idea.

I jotted down a small list of typically pulpy opponents to throw at the adventurers, Nazis, Ninjas, Aliens, Robots, Mutants, Super Heroes, etc. I am even considering Star Wars and Lovecraft influences for this idea. The whole thing sounded crazy, but it was intriguing me enough that I felt if I could somehow come up with a viable solution which would allow me to work such unconventional foes into the dungeon, it had a lot of potential.

Obviously this is a design project for deeper levels, but…maybe I could work with it enough that it wouldn’t have to wait for five years from now. I’ll need more sorting out on that aspect of the Pulp Nexus to see if I can tame it for low-mid levels.

First of all, I don’t want to unbalance the campaign with MP40’s, Ray Guns and Light Sabres. Secondly, how on earth would a bunch of D&D characters stand a chance against such foes? Short of having an arsenal of high level spells and magic items, the normal D&D party would be mincemeat in the face of most of these pulp foes.

My solution, so far, is to introduce a ‘Toy Box’ of wooden soldiers/action figures/lead miniatures somewhere in the dungeon. Call it the Toy Box of the Gods for now. It’s crammed full of various action figures of the aforementioned pulpy foes. The only missing toys are the barbarian ones. That’s where the PC’s come in. Said collector is looking to add more action figures to this Toy Box. Somehow the PC’s will enter a sublevel which pits all of these various forces against one another.

Each ‘force’ has been accumulated by the collector, and reduced to a nice transportable, harmless wooden or lead version, shrunk to 1/72nd size. Entering this Pulp Nexus would place the PC’s on a sublevel with all of the other miniatures, all suddenly very real and very life sized.

Thus, no one could survive and come away with anything more than useless miniature replica MP40’s, Ray Guns and Light Sabres.

In order to level the playing field, range would have to be minimal, so tight confines, low vision, that kind of thing might aid the PC’s against the high tech foes. The PC’s, would, of course be greatly feared due to their magic potential. Even a well timed Sleep spell could decimate the Nazis.

I have also given consideration to making all of these pulp foes actually Goblin versions. Goblin Nazis? Yeah, I like that a lot.

I’m not sure how I’d add a risk/reward aspect to this. It would hopefully end up being a fun, challenging change of pace, and a good source of experience points. Maybe that’s still enough that it could make for a memorable side adventure or sublevel.

More on this once it grows legs.

PS - I hate Nazis as much as the next guy, but they do indeed make for good pulpy bashable targets.
Posted by Sham aka Dave at 4:07 PM