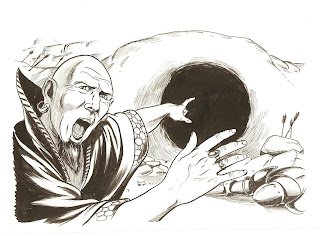 One of the features of Ulin Uthor which is new for me from a design perspective is that I am attempting to make this mega dungeon truly archival. Nearly all of my dungeons in the past, from the late 70’s and up into my last hand written adventure from the late 90’s, were essentially ‘fire and forget’ affairs. My notes were sparse, and were to be normally used in actual game play within a few weeks or a month at most. The exception to that rule was Tower Of The Overlord, a ten level sort of proto-mega dungeon for me. It was fully mapped and described before I ran it, but even that last hand written dungeon was not designed to be used more than once.

Tower was the last D&D campaign I ran, and it was truly mega dungeon in spirit. At that time I called it my ‘Classic Campaign’, as I decided ahead of time to limit it strictly to the three core AD&D hard covers, with little or no home brewing involved. Nearly every session centered on the Tower itself, and the nearby town was used as a simple base of operations. Near the last few sessions a short side adventure was beginning to evolve based upon the actions of the players, but 95% of the action took place underground.

Looking through those notes now I can see all of the adventuring progress which was made by the PC’s. Hit points are crossed off, and hash marks are in the margins. It could certainly be cleaned up and used again, BUT a large part of that campaign involved a story line which severely altered the dungeon itself. The adventure centered around tracking down a group of Magic Users who had taken up residence within those old tunnels and ruins.

Tower would certainly be a great revitalization project at some point, as I enjoyed the outcome of the dungeon and the maps, but what I am getting at is that Ulin Uthor is archival in that the dungeon description itself is permanent. This is one of the hallmarks of mega dungeons, that they are meant to host multiple bands of characters, whether they be controlled by the same, or different players.

To this end, as followers of this blog no doubt are already aware, I am using a system of index cards to detail all of the vital, changing contents of Ulin Uthor. Sure I’ll probably end up with thousands of these 4x6 cards once I put the finishing touches on level 10, but I like the fact that all of the work I am putting into the dungeon itself is permanent. Which reminds me I need to back up my information lest I lose my hard drive!

All of that being said, this method is truly changing the feel of my dungeon(s). Now when I approach the task of filling in a particular map, I give consideration to the overall balance of the rooms themselves. With each level of Ulin Uthor, I am trying to provide different types of challenges for the PC’s. My goal is to add Traps, Tricks, Role-Playing, Melee and Flavor to every region.

Melee comes in the form of Monsters, obviously, and is broken down into Standard, Wandering and Recurring. Standard Monsters are those I rolled up randomly or filled out ahead of time, and are hand written on the individual room 4x6 index cards. Wandering Monsters are to be picked blindly from a stack of prewritten random encounters, also on 4x6 cards. Recurring Monsters are part of the archival description of the dungeon, and their source is considered to be a permanent fixture.

Flavor comes in the form of graffiti, murals, statues, riddles, and other tell tale facets of the dungeon. These are great fun to design, and allow me as author to watch Ulin Uthor’s history write itself. They are nothing more than dungeon trappings, but provide a certain verisimilitude for the players as they possibly try to piece together some of these often meaningless clues.

Traps are self-explanatory, some are annoying, and many are downright deadly. False Doors and Pits are standard fare, and devious room traps are usually unforgiving. In my younger DM’ing days, I typically avoided the more unforgiving Save or Die situations. Not so in Ulin Uthor. Poison kills in the Deep Down.

Tricks are for the most part optional trappings found within the dungeon. Most are strange, magical features, usually with no apparent purpose whatsoever. Tricks can turn into Traps, or might instead aid the adventurers. They are there primarily for experimentation, and do add an element of fun to the otherwise dark and dreary dungeon. Fountains, Pools, Statues, Riddles, Puzzles, etc are all types of Tricks within Ulin Uthor.

Role-Playing is the facet which I need to deliberately remember to add to the dungeon. I’ve inserted certain permanent role-playing opportunities for the adventurers, but for the most part, these opportunities will end up being unscripted and generated by the actions of the PC’s themselves. Not all encounters will automatically end in bloodshed, and I plan to use the reaction table from Vol. III, p. 12 when appropriate. This alone will ensure plenty of ad lib role playing situations for the players.

To this standard fare of dungeon facets, I am adding mapping challenges as well, in the form of overlapping halls, teleport areas, shafts, etc.

While I personally prefer a hack and slash approach to D&D, Ulin Uthor will certainly have challenges of every sort for those brave delvers who dare to explore it’s deep, dark pits.

What follows is a riddle well known in Bend. It is called simply Krawl’s Riddle, and is known to have been brought forth from Krawl’s Pace ages ago, and retold in the form of rumor, tale and song.

One of Gold and Four of Dust
Five of Evil, Five of Lust
Watching all with great distrust
Mortals we, Mortals must
Give our lives for cause
Unjust.

No one knows the message behind this passage, at least, no one in Bend.