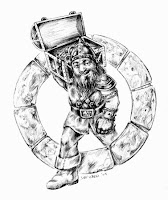 I'm adding a new Distribution of Monsters and Treasure to my Solstice Rules. Here is the text of my thought process and how I came up with the new tables:

In the spirit of OD&D, I am going to experiment with the Distribution of Monsters and Treasure guide presented in Vol. III, p.6-7 for stocking large areas of Ulin-Uthor. As such, I will be dissecting and fine tuning this guide. There are five steps to use when implementing this stocking method as it is originally presented:

Step 1, Manual Placement of Treasure: Thoughtfully place several of the most important treasures, with or without monsters, secreted in out-of-the-way locations.

Step 2, Check For Monsters: Roll 1d6 for every remaining, uninhabited room. 2in6 indicates a monster is present.

Step 5, Random Treasure: Use the random Treasure table to determine the kind of treasure in those rooms indicated.

To begin, a note about my design process:

Before I begin drawing the map for a particular level, I normally start out with a handful of ‘Major Room’ ideas. These may or may not be fully defined at this point, but the idea is in place. The level itself may or may not have a theme, these Major Rooms will fall into such a theme if one is present. Normally, I draw these Major Rooms on the map first, then I fill in the rest of the map with my normal halls, doors, pits and other rooms. Then, I number each room or space and proceed to keying the rooms. I rarely have any actual ‘empty’ rooms, at the very least a room will have some features, even if it is something simple like graffiti, murals or rubbish and debris. These are still considered uninhabited rooms at this point. Certain Major Rooms will include recurring encounters, and will essentially have the same monsters no matter how many times the dungeon is visited. Such examples I currently use are Goblin Spawning Pits, Giant Centipede Nests, Rat Infested Areas, Insect Swarm Mires, Spirit Haunts, Sacrificial Pools, etc. The monsters spawn at these locations, and it is nearly impossible to destroy the source of their seemingly endless numbers. Other than these specific, recurring monsters, everything is, at this point, considered uninhabited.

Now I can move into actually using the guide in Vol. III.

Step 1, Manual Placement of Treasure: Easy enough to understand. I determine areas where I know I want a treasure trove, and I proceed from there. Nothing random at all, just picking and choosing. I write the treasure on a 3x5, and I give each magic item it’s own 3x5. These are paper-clipped to the 4x6 individual room cards I’ll be using to designate the monsters encountered, if any.

Step 3, Random Monsters: Rather than using the actual table in Vol. III, I instead refer to my customized Wandering Monster Table I write up for each level. These normally have ten monsters types, and a small chance of a special or NPC type encounter (currently I actually use a stack of 4x6 cards and randomly pick one of these to determine what is encountered, simulating the die roll, but speeding up play as the encounter is prewritten). So, 2in6 chance of one of these encounters in each uninhabited room. If diced for, I determine randomly the number of such monsters, again from the Wandering Monsters Table, and then write the encounter on the room’s 4x6 and put it back into the card file. Using this system, I can draw a line through defeated monsters, and place the room on the session card stack I use for tracking the group’s progress and experience. One key difference between actual Wandering Monsters and these room inhabitant types of monsters is that Wandering Monsters carry a random amount of coins detailed in that table, while room inhabitant type monsters will be carrying or guarding both those random coins, and possibly an additional treasure as determined in Steps 4-5.

Step 4, Check For Treasure: Now dice for treasure in those same rooms. 3in6 if a monster is present, and 1in6 if none is present. As detailed in the OD&D guide, unguarded treasure should be hidden or protected in some manner, either locked away, behind a trap, or both.

Step 5, Random Treasure: Once the presence of treasure is positively determined, the kind of treasure must be defined using the table in Vol. III, p. 7. I write the treasure on a 3x5, and I give each magic item it’s own 3x5. These are paper-clipped to the 4x6 individual room cards I’ll be using to designate the monsters encountered, if any. I will be fine tuning this table for Ulin-Uthor as detailed below. I will maintain the first column as presented, as well as the Silver column. Simply cross reference the level and the Silver columns, and roll 1d6 or 1d12, and multiply by the amount given.

The Gold column works the same way, but according to the guide, Gold will only be in the treasure 50% of the time, I will use a simple 3in6 chance of Gold in each treasure, and then cross reference and dice as detailed on the table.

The Gems/Jewelry column uses percentile dice, but I will convert this to a d20 roll, as I will be doing for the Magic column. Otherwise the actual percentages will be identical.

As presented originally, one might assume that Magic is completely random. If Magic is a part of the treasure, one would simply use the Magic/Maps Determination Table in Vol. II, p. 23 to determine, randomly, exactly what was found. Furthermore, there is no guide given to determine how much magic is a part of the treasure trove. For Ulin-Uthor, and random magic, I will use a different random system for Magic, fine tuning the Magic Determination Table.

Optionally, anytime Magic is indicated as part of a treasure trove, I can manually place the items as I see fit. Although, for the purposes of this dissection, I will keep the Magic category random, even though I will be making a custom Magic Table for such purposes.

Gem Value: Using the table provided in Vol. II, p. 40, we can dice for Gem values randomly. Each Gem has a ‘base value’, rolled randomly on the Gems table. Then, the guide gives a 1in6 chance that the Gem will be of the next higher category. If the Gem is of the next higher category, one must roll again, with the same 1in6 chance of ‘graduating’ that particular Gem to the next higher category. Rolling for each individual Gem continues until a 1 is not rolled, then the final category or value of the Gem has been determined. This provides a very minute chance of a Gem valued as high as 500,000 GP. For Ulin-Uthor, I will be disposing of this method, and using a custom Gem Table that requires a simple percentile roll, with the level of the dungeon added to it, to determine the value of such Gems. Much less cumbersome, and much faster. Jewelry will be determined using the table in Vol. II, p. 40 as it is presented.

I’m no mathematician, so I’m not sure what the odds of finding a 500,000 GP Gem are using the original guide, but with the new tables, 1 in 50,000 Gems, found on dungeon level 10 or lower, would be valued at 500,000 GP (assuming I crunched the numbers properly). Normally, I wouldn’t place such an insanely rare Gem on a random table, but I wanted to capture the original intent of Vol. II’s table with a much faster and simpler random determination method.

The actual Tables can be seen at my Solstice Tiddlywiki. I'll be using these to stock a lot of Ulin-Uthor, and then making adjustments as needed.