Attack of the Grogs! 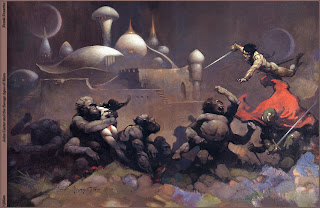 What exactly is ‘Old School’ in D&D terms? Aside from being an overused, tired phrase that has permeated the English language, old school does have meaning and is understood in regard to much of today’s pop culture. But what about D&D terms? What actually constitutes Old School in this crazy pastime we all love so much? At face value, it can mean anything that is ‘older’ or not of the new editions. But that’s a simple way of tossing the term around when one could just really mean ‘old’ or ‘older’. No, Old School has meaning in D&D circles. That meaning, though, is one of personal interpretation. If we break down the phrase itself, perhaps we can identify a more cohesive definition.

Old: distinguished from an object of the same kind by being of an earlier date.

School: a group of persons who hold a common doctrine or follow the same teacher (as in philosophy, theology, or medicine)
Posted by Sham aka Dave at 5:26 PM

Just thought I'd say hello. Found your blog today and am working on getting through the old posts. It's fun reading, the design of your megadungeon especially.

Thanks Wulfgar! I plan to provide plenty of details about the steps I take as the mega dungeon evolves, which hopefully will prove to be useful and informative for other DM's out there who might also be crazy enough to assume such a project.