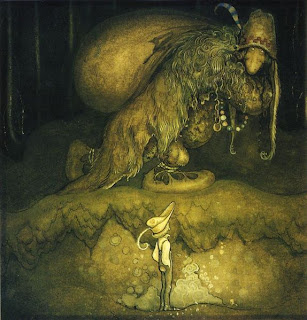 I really enjoy using six-siders for randomly determining monster and treasure distribution. I normally tailor the contents of major rooms, and then let Destiny by Dice determine the rest.

I have no issues sorting out the hows and whys of certain unusual combinations of the die rolls, such as why there are Morlocks in a room right next to an area with a pack of Broodlings. The results can often be thought of as a snap-shot in time. This is what is encountered when and if the party happens across the areas. Perhaps the two have not yet detected one another, perhaps the Morlocks have sensed the Broodlings and are either hiding or preparing to attack by surprise, perhaps the two groups of monsters are about to engage in melee or attempt to parley with one another. Oftimes, such closely located groups of monsters will draw one to the other if melee is undertaken by the characters. The possibilities are limited only to the referee's imagination.

The point is, there's not always a need to worry about explaining exactly why such a situation exists. Neither are located in a lair, rather being on the prowl or setting up an ambush, or taking a breather from their stalking and hunting.

I use a reworked method of the original guide from The Underworld & Wilderness Adventures for not only filling minor areas, but also as a quick restocking method. The percentages in this Restock table replicate the OD&D method, but remove one die rolling step, ending up with a single table rather than sentences of text describing these steps.

I realized I could further alter the Restock table, and I came up with a pair of options which still maintain those percent chances located in the original method.

I realized I can replicate the 11% chance of an empty room with hidden treasure, and require a second d6 roll only 25% as often, as follows:

As an alternative, I came up with a Restock table using 2d6 instead, thus requiring no second rolls whatsoever:

No second rolls, but I feel it lacks the elegance of the single d6 tables.

The rounded percent chances of the four possible results are as follows:

One could easily contruct a d00 table for this, but I dig the OD&D d6 vibe.

I'll probably use the revised 1d6 Restock table. It's a simple change, but I feel it creates a nearly perfect restocking or filling method.

Another thing I have enjoyed thus far is the synergy between the Restock table and the tailor made Wandering Monsters tables. Looking at the four level one maps for The Dismal Depths, you will see that 33.2% of all monsters either encountered randomly or prefilled using the Restock table, will be the inhabitants of that particular region. It gives a nice feel to those areas, as it ensures that the natives will maintain a strong presence despite the overall random methods used to fill out the details therein. I could probably hash out a better Wandering Monsters table, and dispense with the 2in6 native check before the actual roll, now that I think about it.

A topic for another day, perhaps.

~Sham, Quixotic Referee
Posted by Sham aka Dave at 10:05 PM

Your "restock" table can also be used as a "stock in the first place" table... stolen for my referee binder!

Glad you like it. My preference is the single d6 revised table. And yes, it's usable for initial fills or distribution per the volume 3 guide, and as a quick restock roll. A referee could even roll it during play for empty or previously cleared rooms.

Good work! These slimmer charts would fit better on quickref sheets or a screen.

Nice, I think I prefer the 2d6 method. I have always preferred the bell curve from multiple dice. Consider it taken.

Jeff: Thanks! Yep, the original idea was a tiny table for the one-page dungeons, but I realized I could replicate the OD&D numbers as well.

Mike D: Have at it! I like bell curves as well. I had to tinker with the order of results to get the percentages to match, but in the end I like that single d6 roll. All three function in essentially the same manner.

These are just terrific. Any chance you'd consider adopting a pdf /print button so I can easily save this (and other useful posts of yours) as a pdf?

Thanks Carter. I have the print friendly page bookmarked. I just haven't gotten around to using it yet. Thanks for reminding me to implement this tool. Coming soon!