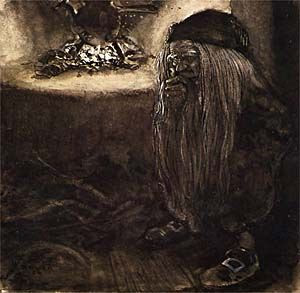 February the 29th marks the one year anniversary of Sham's Grog 'n Blog. I'm selecting February the 28th to observe this fact. I didn't realize until now that I started this blog on Leap Day 2008.

Most of the time I love this place. Other times I feel almost guilty when the posts are scarce. I experienced a particularly long hiatus for a stretch last Autumn, and my return to more active blogging wasn't an easy transition for me. I had managed to miss a lot of the blog-o-sphere activity during that time.

Ye Auld Grog & Blog started on a whim, really. It helped me fill in the emptiness of having no actual D&D games running at the time. It began with me explaining my pursuit of OD&D, and continued for a time with random musings and soapbox rants about old school gaming style.

Basically I was writing to myself for months. Slowly I began to receive comments. Mostly good comments, as well! Somewhere along the way, during last Summer, my ideals for this personal writing space evolved. I vowed to put away my soapbox and focus on the items which I feel had been best received during the formative months, homebrew stuff.

Every once in a while I squeak out a decent idea, so my efforts have not been fruitless. I'm enjoying immensely the undertaking of the Cover to Cover series, even though the initial fervor of re-reading the white box has lost some steam along the way. It's a project that will not only see completion soon, but will open up other efforts along the lines of an OD&D companion book...or something.

I enjoy sharing bits on The Dim Expanse, but The Dismal Depths has been my current very involved undertaking. The One-Page Dungeon template is simply perfect for sharing with other D&D players, while The Dim Expanse is somewhat clunky when I try to put it into a usable format for other referees. In that way it's almost Castle Greyhawk-esque. Far too much of the information and ideas for that megadungeon are in my head, and not actually on paper.

The change I've noticed here in my own sometimes awkward ramblings has been one of content. I'm not really one to review publications, nor comment on the state of role-playing in the modern age. Every once in a while I might spout off some ridiculous observations, normally related to music, but for the most part this blog is about sharing my ideas and enthusiasm for D&D.

I'm thrilled to see the way my one-page idea and subsequent "how-to" guides have been embraced by fellow gamers Chgowiz and Amityville Mike. This alone makes me a happy blogger.

If I've offended anyone in the past year, I'd assume that I will again at some point in Year Two. It is not my intent, but clearly some of my preferences rub folks the wrong way. So be it.

If I've convinced anyone to give OD&D a go in the past year, I hope you have embraced it as I have.

If my musings have inspired any gaming ideas in the past year, then it has all been worthwhile.

If you've actually read all of my posts, I'm not responsible for the meds you're taking now.

If I've made anyone laugh in the past year, then I'm glad I'm not the only lunatic gamer out here on the net.

All in all it's been a good but not great run. I hope to increase the reader value of this blog over the next 12 months with more ideas, examples and enthusiasm.

You have been warned!

~Sham, Quixotic Referee
Posted by Sham aka Dave at 8:19 AM

Happy blog birthday! You're doing good work, and I hope it stays fun for you.

I can safely say that your writings here and your enthusiasm for the game has been the #1 cause of my decision to embrace an edition of the game closer to its roots (LL in my case) and put AD&D on the shelf for a bit. I don't regret that decision for a moment.

The One-Page project has worked very well for me and I, again, thank you for introducting that idea into the collective gaming mind. For the same reason you mentioned - one's own megadungeon notes becoming dense treatises - the One-Page has allowed me to share more of my own ideas and style than I ever thought I could through a blog.

I'm looking forward to the coming year around these parts

Keep up the good work, dude! You made a great impact on the scene over the last year.

I've never been offended by anything you've written. I like to read about your P.O.V. on OD&D. If anyone is offended, they need to grow thicker skin or wear chainmail!

I miss Friday Flashback though!

Here's to another year!

I love the fact you started on a leap day. :)

Thanks for a year of thoughtful and inspirational reading. Don't feel guilty about slow times, either. Creativity runs in cycles, I find--sometimes its pouring out of us, other times its dry as a bone. I don't think any of your readers would begrudge you a break from time to time...so long as you promised to come back!

I just used the One-Page templates to do a three level dungeon. I've introduced the Entourage Approach to my games. I love Friday Flashbacks. Your output here is both inspirational and useful.

Speaking of Friday Flashbacks, I posted an inadvertent one of my own. You might enjoy it:

Happy Blog Day! You work here has been great inspiration to me, you put out a lot of quality stuff here. I look forward to another year of great OD&D bloggin'.

Happy Blog Birthday! I haven't gone delving into the past of your blog for material yet, but your reflections got me curious!

One of the reasons I even opened a blog was to have an updated blogroll, and you're on it dude, so keep on truckin'.

And thanks for reminding me that my own b-birthday is tomorrow! :)

Thanks for a great year. I'm looking forward to the next 12 months reading one of my favourite blogs.

Happy blog birthday from me as well! I always find something good here.

P.S. The verification word for this comment is "chester". tell ME these things are random!

Happy Birthday and many happy returns of the day.

You are one of the blogs that inspired me to write my own, and to do some really cool things with my game. I'm glad you mashed my McFly button and I'm really thrilled to share in the dungeons that you've created. We should collaborate on more cool stuff! ... Profit! yea...

For the one-page dungeon template alone, you deserve a hearty handshake and a manly slap on the back for a job well-done. It's what I use for Dwimmermount and I'm very grateful for that. Keep up the truly excellent work.

Many thanks for the kind words, one and all. Right back at ya! You guys are a truly inspirational lot.

If I recall right, yours was the first OD&D gameblog I looked at..and then I decided to start one myself. I'd like to think that such inspiration was a good thing..though maybe "blame" might be a more accurate word. :D

Looking forward to another year (and it does seem a heck of a lot longer than that, time is nine tenths perception, I suppose).

As I’m wont to say, RSS means never having to say you’re sorry for not posting. Feeds that remain silent until their author(s) have something to say stay in my Google Reader. Feeds that post just for the sake of keeping to a schedule get deleted.

Thanks for the well-wishes! Robert, you're right...good point.