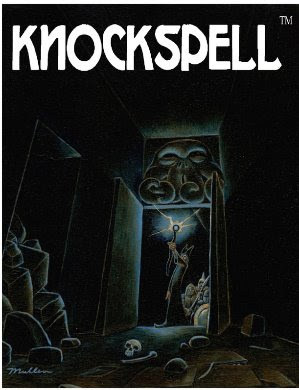 Knockspell #1 from Mythmere Games is now available in PDF here via Lulu. I'll personally be waiting for the print version, which should be available for order soon according to the announcement thread over at the Swords & Wizardry forum.

To quote Matt Finch of Mythmere Games in regard to the basic mission of Knockspell magazine:

"Knockspell Magazine is intended as a general gaming magazine for all out-of-print fantasy RPGs that use D&D-style systems. That includes Original D&D, Advanced D&D, OSRIC (1e), Swords & Wizardry (both Core and WhiteBox), and Goblinoid Games' Labyrinth Lord. There might also be articles about Castles & Crusades and BFRPG (Basic Fantasy Roleplaying Game). Because of licensing requirements, specific game resources will be identified by the name of the retro-clone, not the trademark: Swords & Wizardry (0e), OSRIC (1e) or Labyrinth Lord (Basic).

The magazine's goal is to re-invent a particular approach to gaming - where the gamer is respected as a hobbyist, not treated like a consumer. We're going to treat the whole batch of Gygax-type fantasy games as roughly compatible with all the rest, assuming that the reader has the intelligence to tinker and convert. And we're going to treat the rules as secondary to the fantasy. In other words, we're hoping to publish a magazine that harks back to the days in which people saw fantasy games as a wide-open horizon of possibilities instead of a particular product line with "official" rules. Because what's actually changed, folks? Nothing but attitudes, trained by an increasingly corporate approach by game publishers. The open horizon is still there, still ready to be explored, still infinite in possibilities."

I've been anticipating the release of this, as have many others, for quite a while now. I'm looking forward to adding another resource of fan-created material to my repertoire.

Hats off to all involved, and especially to Pete Mullen. That cover is fantastic!

~Sham, Quixotic Referee
Posted by Sham aka Dave at 7:25 PM

I'm going to wait for a print version as well. But I'm pretty excited about it! I sent them some illustrations for the magazine but can't remember if they're using them or not. Either way, it's going to be awesome!

Yes, indeed. It took much longer that I thought it would to see the light of day, but hopefully if Knockspell is well received we won't have to wait as long for Issue 2.

It can only help the OSR if there are two mags going at once, this and Fight On! Hell, maybe there's enough interest for five fanzines!

Things are looking up.

Ooh. Definitely something I want to look into, this -- and I would have missed it altogether.

I didn't know you were one of of the folks with stuff appearing in the first issue. Matt didn't mention your name to me when I was doing the work on my contibution. I'm glad to see I'm in such good company.

And I agree. The wait was much longer than I think anyone anticipated, but hopefully it's the start of a new bunch of cool in the old-school circles.

I did a stealth submission months ago. I didn't even mention it here. It's something entirely new and folks will have to get the magazine to read it. It's rather short, but the idea is somewhat novel.

Ditto on the good company. I'm glad to be in the premier issue.