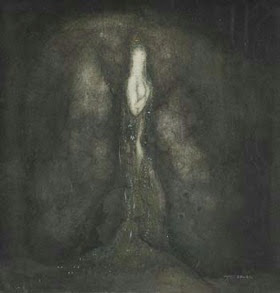 The notes from my hard drive which inspired the homebrew treatment of Trolls posted yesterday is copied below. As mentioned, this is a collection of ideas intended to flesh out Calithena's Dark Trolls in the FO! group megadungeon project. I renamed them from Dark Troll to Dim Trolde when I realized I had let the information get a bit out of control. Eventually this Trolde tribe will find a home in a future dungeon. As you can see, some of the planned areas for the level are in italics, such as the Endless Mines, Smelting Pits, Grand Smithy, Fungus Farms, Central Brewery, Muumilaakso, and Raptor Holes. The dungeon is half-way written just from these notes.

The Uklartrolde (Dim Trolde) of Ulin-Uthor are an expansive, extended subterranean tribe. Their kind clawed their way to dominance within these ancient tunnels and caves before mankind ever set foot upon the barren lands above. This tribe, called the Morkevagten, has, through the ages, developed a somewhat advanced, in underworld terms, societal structure. The Morkevagten have developed the crafts of mining and smelting, bronze working, masonry and architecture, rat and raptor husbandry, currency, fungus brewing and distilling, and, perhaps most importantly, slavery and extortion.

Most of the Morkevagten labor is performed by slaves, and much of their continued income is derived from extortion. The Dim Troldes demand gold from the various intelligent inhabitants of Ulin-Uthor, in return for protection. Those that do not pay are thrown into slavery, or eaten. The Morkevagten also have agents who perform these same duties on the surface world; rounding up potential slaves, and extorting local businesses, in exchange for various rewards. These agents range from all manner of goblin kin to evil men threatening to ‘bring down the wrath of the Troldes’ upon their intimidated victims. These are not always hollow threats, as the Dim Troldes do from time to time raid the surface to gather slaves, and pillage nearby areas. These raids are more or less a show of strength in order to maintain their stature in and around Ulin-Uthor. The Morkevagten are still, despite the civilized trappings, an evil, corrupt and selfish lot, prone to theft, betrayal and murder within their very tribe. Station in the Morkevagten is not through birthright, but through wealth and power. The Dim Troldes spend more time dealing with threats from their own kin than those from the world around them. It is hard to dispute the fact that the Morkevagten have risen to power in spite of themselves, but their kind is certainly not to be taken lightly.

Mining, Smelting and Bronze working:
Ginkul: Copper, Rikaa: Tin, Vaett: Bronze.
Chalcocite, cassiterite and native copper minerals are mined by Scourge driven Slaves, in a complex, haphazard series of vertical shafts and galleries in the Endless Mines. The shafts follow the ores far below, as deep as 75 feet in some cases. Ore crushing is performed in the galleries with heavy stones, then hauled up to storage pits before being transported to the furnaces. Raptor-stomach bellows are used to stoke the charcoal fueled, clay lined, sandstone furnaces in the Smelting Pits to allow the Slags to produce ingots of copper (ginkul) and tin (rikaa), which are then combined again to produce bronze (vaett). The bronze is poured into molds then worked with hammer, tongs and anvil by a Sapper in the Grand Smithy.

Arms and Armor:
All Trolde Arms & Armor are forged in Bronze.
Lamellar: Hauberks of interlinking bronze scales, equal to AC 5.
Plate Armor: Hammered bronze chest pieces equal to AC 3.
Embossed Morelwood Shield: Round shields with hammered bronze facing.
Weaponry: includes Daggers, Swords, Maces, Axes and Spears, the Spear being more or less a light lance used from a mounted position, never as a missile. Dim Troldes might also employ heavy weighted Throwing Nets and Bolas; both of sinew and bronze weights, serving as the only actual missile weapons of the Morkevagten.

Brewing/Distillation:
Vast sublevel Fungus Farms are cultivated and harvested by Scourge overseen Slaves. The fungi is collected and brought to the Central Brewery for use by the Swillers in their various concoctions and compounds. Fermentation tanks, copper distilleries, morelwood casks and barrels for aging, charcoal kilns, and various fire pits are all used to produce the masterfully crafted fungus byproducts.

Rat Husbandry:
Dim Troldes have perfected the art of Rat Husbandry. A particularly delectable strain of Rats, called Muumi, has been cultivated for centuries through stockbreeding, producing a plump, round, furry white rat, with a large snout and unusually large, almost quizzical eyes. They are tended by the ratherding Sloggers, overseen by the Great Tove in the heavily guarded Muumilaakso. In addition to the Muumi, the Great Tove oversees to the tending of sundry Rat strains which are raised for the less discerning palate. To non-Troldes, it all just tastes like Rat.

Raptor Husbandry:
Much in the way the Morkevagten have used stockbreeding through the ages to control Rat strains, they have been perfecting the crossbreeding of various subterranean bird-like theropod dinosaurs (Dromaeosauridae). Their ultimate achievement has been the Cave Raptor, a large strain bred to serve as a fighting mount for the Dim Trolde Seekers and Sentinels. An ongoing, difficult to master project for the Swagjags has been the Feathered Raptor. The Feathered Raptor’s purpose is to guard the Raptor Holes and their priceless eggs, but the little predators are prone to roving the upper areas of the caves seeking out prey. The Feathered Raptors will not attack Troldes, nor anyone in the presence of one, but have created much havoc over the years with their relentless bloodthirsty hunting tactics. The Swagjags might never learn to control the small man-eaters, but they seem to enjoy watching the fruits of their labor pitted against one another in Pit Fights, or shredding apart an intruder. Raptor Pit Fighting is an enjoyable spectator sport and gambling event for the Morkevagten.

Raptors:
Cave Raptor (Utahraptor): AC: 4, Move: 12, HD: 10, Damage 2d6. 10 feet long (20 with tail), 7 feet tall, and weighing about 1,500 lbs. Covered in dark brown feathers, with massive jaws, long tails and bird-like feet topped by a single massive curved hind-claw. Cave Raptors are trained to bite rather than use their formidable dagger like claws so as to not unsaddle their riders. These huge dinosaurs can trample opponents if able to charge into melee, causing 2d6 to all in a 5’ wide by 20’ long path. Save vs. Paralyze to avoid being bowled over and spending one round gaining footing.

Feathered Raptor (Velociraptor): AC: 2/7, Move: 18, HD: 2, Damage 1d3+special. 3 feet long (7 with tail), 2 feet high at the hip, and weighing about 35 lbs. Covered in grey and black feathers, with strong razor fang filled jaws, long thin tails and bird-like feet topped with a single sharp, curved hind-claw. Feathered Raptors are the ultimate hunters; fast moving, silent, sly, cunning and always hungry. They hunt in large packs, and work in unison to flush prey into ambushes, or simply overwhelm larger, slower moving targets with their vicious bites. The sharp hind-claws are normally used to puncture a target, pinning them in place, or allowing the Raptor to cling to the target as they lock their jaws down for the kill. Once a Feathered Raptor has hit a target, it will cling to it and deal 3 damage per round thereafter. Up to four of these murderous little predators can attack a man each round. Feathered Raptors are lightning quick, as reflected in their superior AC, which is reduced to 7 after they have locked their jaw in for a kill. Slain Raptors will have to be carefully removed from their prey by prying open those deadly jaws.

Feel free to borrow, copy, paste what have you. I think a damned fun dungeon level will spring forth from this information eventually.

~Sham, Quixotic Referee
Posted by Sham aka Dave at 2:50 PM

So much cooler than just taking trolls out of the book and using them again and again -- you have at least one full dungeon level here (probably more) with backstory and everything.

Kudos to you, sir! You truly embody the spirit of old school gaming!

These villains will probably appear in every corner of the FO mega-dungeon. I'm wrapping up level 6, in which there will be one "unexpected" trolde guest. Just enough to hint of the vast tribal influence/danger.
Also, petrified fungus as charcoal - nice!

Labsenpai: If you use something like this for FO, they would actually be Dark Trolls.

I didn't relate my work here properly. It started out as design notes for FO Dark Trolls, but became Dim Troldes for my own campaign. Why? Dark Trolls aren't actually mine to make up. I had mistakenly thought their home was on level 8, an as then unclaimed level of FO. The Dark Trolls of FO are being designed by the author of level 9, Citadel of the Dark Trolls.

Sorry for the confusion!

Still, don't you need Troll info for level 5, which has a lot of "traffic"? I'll be waiting to see how your denizens deal with them, I suppose.

Yes. Thus far in my work for level 5 I've kept the Trolls to a minor amount of descriptive info, basically just saying that they are intelligent, weapon and armor using Trolls.

Altough the Cave and Feathered Raptors did make it into the level, as shared in the post.

Either way, I've left them somewhat nondescript in my latest level. You're welcome to use anything I've written here, even for TDB.

I'd be happy to "reconvert" these to Dark Trolls for FO! if it would help the project along.

I just don't want to step on any toes as the Dark Trolls might end up being something else entirely.