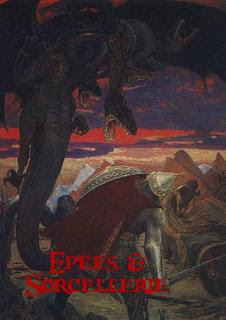 Myself, I like to. Hopefully I wrote the post title properly, because I wish I could read Francais as well. Nicolas Dessaux has finished his French language version of D&D, titled Epées & Sorcellerie, from John Adams and crew at Brave Halfling Publishing. It is available, for now according to BHP, in a print on demand format through Lulu, and as a free PDF from the same online company. I assume this means BHP will offer their own print version in the near future. Here's a link to the announcement.

Monsieur Dessaux is also known around these parts as Snorri. I have a great appreciation of some of the observations Snorri has made in regard to D&D, some of which have been shared here at Ye Auld Grog & Blog, and others you might find at the famous ODD74 forum. Nicolas also runs the Wizard in a Bottle site devoted to his publication.

Here's a quote, I've no idea exactly what it says but it looks very important.

I'm going to order the Lulu PoD version just because. I can't read it, but I sure as hell think Snorri deserves a big fat clap on the back for spreading some old school love.

~Sham, Quixotic Referee
Posted by Sham aka Dave at 9:11 AM

Google Translate spat back:
"Swords & Sorcery is a role playing game based on the rules and the atmosphere of the first role-playing game published by Dave Arneson and Gary Gygax in 1974, never published in [French]. It can be used as a return to [the sources] of the role play, but was designed to allow play in any Sword & Sorcery universe."

Ahh, thanks for translating! I kinda got a feel for it just skimming through, but it's good to see the whole thing.

Thanx so much Sham! I'm very proud to have my little clone on your blog I read everyday! Chris translation is accurate. And the french name for Grognard is Grognard, for sure.... from the verb Grogner, which means "to growl" ;) Vieille école is right too, Christopher.

The wife and I spent a while reading through Epées&Sorcellerie, I was surprised I could make as much sense out of it as I did (studied Spanish and Italian not French, I supose context goes a logn way. For a while I read passages to her with my atrocious pronunciation and she translated unless I was way too off in my non-mastery of French. I suspect some of the monster and spell names will be moving into my games. "Protection contre le mal" on a scroll found as part of a treasure haul just sounds a little bit more..how you say, fantastique.

Vieille école is right too

You mean I actually typed it properly using an English-French Dictionary? Cool! It was my best guess.

The more I read E&S, the more I'm liking it. It's not actually reading per se, more or less gazing at it. I love the look and feel of E&S.

For those who may have misunderstood my French humor (perhaps because I didn't follow it with a "muh-huh-HAW"), what I said was:

I was in no way showing off (other than displaying my talent for remembering things from 25 years ago better than I can remember things from 25 minutes ago!) or correcting anybody's Frenchiness.

My favorite part so far is that Lighting Bolt is translated as éclair, which is on the one hand accurate, and on the other hand unintentionally hilarious. I'm just envisioning the following:

MJ: The sorceror levels his hand at you and intones words of dark power...there's a gigantic eclair coming at you. (Roll roll roll) 19 damage, save for half.
Player: Is it at least chocolate covered?

"Is it at least chocolate covered?"

Only if it was cast by a member of the pâtissier sub-class. If you're really lucky he won't follow that up with a volley of brioches fatales.

"If you're really lucky he won't follow that up with a volley of brioches fatales."

LOL Thanks - I nearly snorked Diet Pepsi all over my monitor. :P

Hey, for sure, a french game is about gastronomy! A true french sorcerer spellbook involves 'taste vine elegantly' and 'summon snails and garlic' ;)

I though perhaps it was something along these lines, thanks for translating, Chris :-)

éclair is a great observation! Reminds me of Chocolate Thunder (aka Darryl Dawkins) for some reason.

Count it, you poodle-walking Surrender Monkeys.