The Dismal Depths: Treasure Maps and Other Ideas 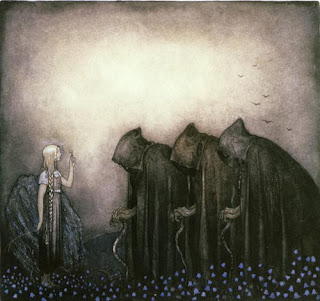 Work continues on The Dismal Depths One-Page Dungeon series. I've been adding information to the dungeon between room ideas and maps, to the point that Level 2 is still in the "done but needs to be mapped" stage. It's close, and I hope to make the make Levels 2A-2D available all at once, and do the same with Levels 3A-3D. Those will comprise The Upper Levels, and then I will get serious about finishing all four three-level sections. The Dark Domain, originally slated to be simply Levels 10A-10D has been extended down to Level 12 in my notes and sketches.

As you can see I work rather slowly and normally like to create in large chunks. Unfortunately with the many projects I have going at once, this means I often set things aside and they gather dust a little bit longer than expected. Well, good news, I dove back into The Dismal Depths yesterday.

In addition to the entirely homebrewed Bestiary, I am currently putting together an entirely homebrewed Dismal Depths Treasury. I am planning on dozens of new magic items. Rather than dispose of the OD&D magic item base, the Treasury will work as a supplement. I'll likely alter the standard OD&D Magic Items table to include a Dismal Magic result and accompanying table. While I plan to manually place one instance of each of the new items, and no more, referees might enjoy seeing them on such a table as well.

I am also including a handful of homebrewed Artifact type items in the Treasury. They will most certainly be in the clutches of the more nefarious denizens of The Dark Domain, and not found on any random tables. There will also be a dozen or so Tech Devices described in the Treasury, but seperate from the magic items. Laser Swords, Dart Guns, Acid Grenades, that sort of thing. Nothing that would upset the game balance, more or less simply magic items turned into an alternate form.

Along the way I am adding new rules for these magic items. For example, all magic Weapons, including Swords, throw two dice for damage, using the highest. All magic Armor ignores any damage roll of "1". All magic Shields have a deflect chance of Xin12. That sort of thing.

One of my ideas which greatly appeals to my design sensibilities embraces the observation of OD&D maps I made in one of the Cover to Cover posts, that is: It’s as if the deciphering of a treasure map generates the treasure listed, along with its guardian.

I've also been kicking around ideas for special sublevels within The Dismal Depths, so far these are simply names of places such as Gavagan's Bar, The Glittering Sands, The Snow Globe, The Donjon, Franken Labs and The Dome of Perpetual Indulgence.

Here's where the ideas all collide. I'll be making a guide for how to utilize maps in the Treasury, and including special, specific Sublevel Maps on the table. When a map is determined to be in a treasure trove, there is a chance that it will be Ixmorin's Ill-fated Map #3, for example. This will allow the player characters to then cast Read Languages on the map, once discovered, and decipher the location. The referee would then decide where the as to until then secret entrance to Ixmorin's Dungeon #3 is located. Using the One-Page for that mini-dungeon and dropping it anywhere in The Dismal Depths for the characters to go to and enter that secret "bonus" sublevel.

Anyway, just taking a break from dungeon design to float a few ideas for the project here at the blog.

~Sham, Quixotic Referee
Posted by Sham aka Dave at 6:35 AM

I have to read more about treasure maps. Are you saying that generating a map (according to OD&D) would generate a treasure and we would need to then make a dungeon/area around it? Or was the thought that the map would lead to an existing level/area?

I use maps as the latter right now - when they come up.

My operating assumption has always been that maps to lead to previously undiscovered minidungeon, requiring a small wilderness trek and a wee bit of crawling to reach the treasure.

...though I am working on a random table designed to explore other possibilities.

BTW, I love the 'unlock a secret bonus level' idea!

I too like the "unlock the bonus level" aspect of the treasure maps. I think you are on to something there, can't wait to see more of your Dismal Depths.

Up until I did my Cover to Cover thing, my maps were exceedingly rare, each was hand drawn and led to a predetermined locale.

It all depends upon how you read the guides in Vol. II and III. Maps constitute 25% of the Magic or Maps random checks. If you read the guide, it seems to me that the deciphering of that map generates the presence of the treasure, and possibly a guardian.

I like that particular "gameism" the way I read it, so the notion of adding specific Sublevel Maps to a Maps Table for the DD just seems like a great idea.

Basically I'm meshing the two ideas. BUT, I won't use any actual handouts. A generic map will generate random treasure. Be it invisible or behind a secret panel. The Sublevel Maps will lead to one of the mini-dungeons. The secret entrance to these can be placed wherever the referee desires. Each will be its own one-page map.

Of course referees can manually place the location of the Sublevel Maps if he prefers.

This is "Chgowiz's Brain is More Dense Than Normal Day"...

If you read the guide, it seems to me that the deciphering of that map generates the presence of the treasure, and possibly a guardian.
...
A generic map will generate random treasure. Be it invisible or behind a secret panel.

So I generate a Treasure Map whilst creating a level. How I read that second bit is that I need to place a secret or hidden treasure somewhere in the existing dungeon, or create a few extra rooms (and possible guardian) to that treasure. The players would get told they have a map and then at the appropriate time, tell them they've found the entrance, or secret.

Does that sound dumb?

Chgowiz: Nah, I'm not being clear enough right now. The way I read it is that a map is nothing more than an item until Read Languages is used on it.

At that time, the referee rolls on the table to see what the map leads to. This is in Vol. II. It can lead to treasure, magic or treasure and magic.

I handle it that NOTHING happens until Read languages is cast on the map. So, I don't detail anything in regard to maps beforehand. That's just how I do it.

If maps appear during your prep/fill, you can handle it your way. That's probably how everyone besides me does it. I just like the idea that maps (actually deciphering maps) creates the completely hidden, secret treasure they lead to.

In my games, there is no treasure until that map is deciphered.

Let me add that this method of handling maps is derived from the spell descriptions of Read Magic and Read Languages.

With the Dismal Depths Treasury I'll be able to clarify how these spells and maps work in my games.

You're being clear, I'm just being dense. So Trell finds a map. He has "Read Language" somehow cast upon it.

It's that Step 2 that I'm not getting. Once read languages is cast, and you determine if it's a Monster/Treasure/Both/Neither - do you make a note of where the loot/badguy is at? Do you assume the player goes there? How/when/where do I get from reading the now deciphered text to the actual place the map shows? Is this part of the same level, different level?

Like I said, you're probably explaining it and I'm not getting it. Sorry.

Maybe I'm overthinking this, but could the requirement for using read magic on a treasure map imply that the map itself, or possibly the act of following its' direction, is a magical effect.

Perhaps you can only access certain sublevels *at all* by following the directions on the map to the letter. Kind of an 'U, U, D, D, L, R, L, R, A, B, A, B, Start' cheat code for the dungeon itself...

"Ok, 106 paces north. Now 12 East. Ok, now we have to climb this chimney while dressed all in yellow. Then we have to traverse the next room while carrying no iron..."

Chgowiz: Gotcha! OK, the step you are asking about is left to the referee to decide. The map doesn't simply "turn" into treasure. Somewhere, near, far, above, below, awaits the secret hidden treasure. It could be invisible, beneath the floor, in a secret niche, in a secret chamber with a trap, a guard, or both. That's the fun part.

I have used this system twice thus far. Both times it worked great. The players had to take the maps back to town so the MU and Elf could memorize Read Languages. Once they got back to the dungeon I rolled on the Maps table, picked a spot on the current level, and told them "left, right, left, straight, from hexagonal chamber go 22 paces and stop." that kind of thing. One was simply behind a secret panel, the other went through a secret door they probably would've missed, and was buried beneath some stones in a cave.

Chris: I do consider these maps minor magic items. They are the key to actually entering the Sublevels I envision for DD. There is simply no other way to do so.

If the process of following the maps directions summons their entrance, or conjures magic treasure troves, thats for you to decide. In essence, it must be magic if the treasures/entrances are otherwise impossible to locate.

I just consider it a cool feature of DD, and plan to use this method for all of my future games.

I do like your idea here though, that unlocking the magic might entail some other odd directions. Jumping through hoops and all that.

Your comment reminds me of Indiana Jones and the Last Crusade when Indy follows the clues from his fathers notes and avoids some traps.