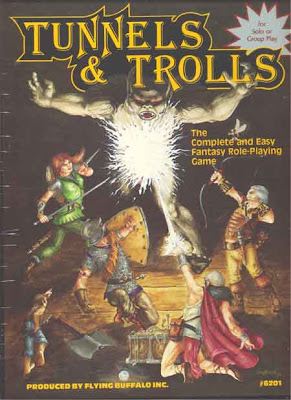 My list of preferred RPG's, which I absolutely and fully endorse to anyone who will listen, is relatively short. It consists of D&D, Call of Cthulhu, Gamma World and Traveller. In that order (today, anyway).

So I was chatting with a gaming friend recently about my quandary in putting together many of my house rules and home brew ideas in a cohesive campaign setting. A supplemental rendering of tidbits from the past three decades tied together with a particular theme and world. No Future was the original setting plan, but I feel that particular blend of pulp influences simply doesn't have the zing for me that it once did. Perhaps with an interesting twist it still might.

I've often felt the need to start with a core of six character classes, each using one of the six abilities as a prime requisite. This calls, of course, for classes that use Constitution, Dexterity and Charisma for modifiers to experience (a topic I addressed in a recent submission to Fight On!, which may or may not ever see the light of day as it might be a bit off-the-wall as written for an OD&D game). Anyway, I was complaining about Clerics and how they didn't really fit in my envisioned world, and how perhaps I could ditch Wisdom altogether, or instead replace it with Luck.

From then on I have become unsettled. I never considered T&T in the past. Sure, I knew it was some crude knock-off of D&D, and that some weirdoes actually liked it better than my favorite game back in the day...but ME? Play T&T? I think not!

Well, I did a wee bit of oracular internet research in order to put my mind at ease. This led to further discomfort.

Pretty much everything I have learned about T&T is exactly what Mr. Smart-Ass was trying to tell me, or so it seems. There really isn't that much information on the game out there, not when you compare it to even say, OD&D. But isn't it really just D&D in a different costume? Maybe it is.

The only thing I can do now is ask my readers to enlighten me. Is Tunnels & Trolls really a rules-light, fast paced, open-ended version of OD&D? And perhaps most importantly, is the solo aspect of the game lame, like every other solo RPG I have ever tried before?

This is all very unsettling. Its akin to telling me that Vampire: The Masquerade would suit me better than Call of Cthulhu; or that Aftermath is more appropriate for me than Gamma World. It means that possibly, I have been playing the wrong game for thirty years.

In all seriousness, I would like to investigate Tunnels & Trolls, and I’m asking for some comments in regard to that venerable game system. I know little about it, other than there are available copies of editions 5, 5.5, 7 and 7.5. If I am going to look into a rules light game that I can potentially use for some fun solo gaming, and even one shots here and there, I’d appreciate some direction. I assume that the older editions are for me, but what I’ve been led to believe is that even T&T 7.5 is somewhat old school in its approach.

Edit to add the following:

Thanks to Matthew's link in the comments, I printed off the free quicky rules, and played the solo adventure included with them. Goblin Lake, a mini solo adventure that was ummm...quaint.

The rules are silly easy to pick up (but then again, as quicky rules they should be). I'll do a proper report at a later date. I managed to kill six characters before I completed 'most' of Goblin Lake and decided I was done with it. The final character (all Goblins, by the way) found a ridiculously powerful item and emerged from the adventure looking for new challenges.

I'm not sure yet whether I like the T&T mechanics, but I wanted to post a link with three online solo T&T adventures. You can seriously dl, print and be playing one of these in under 20 minutes.
Posted by Sham aka Dave at 6:11 AM

I recommend popping along to RPGNow and downloading the free quick start rules: http://www.rpgnow.com/product_info.php?products_id=54407. I found it quite an interesting read, but eventually concluded that it was not the game for me.

I have been playing the wrong game for thirty years.

Wow, that's a really strong statement. Is it the wrong game if you've had fun for 30 years? Or do you mean that there are things about OD&D/AD&D that were treated differently/more like how you wanted them treated in T&T?

I played the solo version of T&T many, many years ago, and from what I remember, it just didn't "feel" right. That could be because I was playing it solo

@Matthew - thanks for the link!

The thing about T&T that might keep me from ever loving it the way I do D&D is the way you increase your ability scores.

This isn't like in 3.0/3.5, where you gain a point every four levels; this is more immediate and part of the core of the game. Your ability scores go up.

Once you've gone along for a while, you basically become a comic book superhero (which, come to think of it, is the same problem 3.0/3.5 has...)

But bits of it are nice, and are worth stealing. I have edition 5.5 of T&T (just like in the picture you used).

I'd recommend 5.5, though I haven't given 7.5 a look and have heard good things about it.

The only real gripe I have about T&T is combat, which often boils down to counting and adding pips and can be unsatisfying to some.

Still, I've had fun with T&T and it is worth looking at.

Matthew: Thanks, I'll dl that shortly!

Chgowiz: Once coming around to OD&D, I felt I had been playing the wrong edition (1e) all this time. I just find it unsettling that it's taken me 30 years to even explore T&T! No, it will never replace D&D, and no, 1e was not really the wrong edition.

Thanks for the comments. I'll check out the freebie first, but so far that's one vote for 5.5.

While I'm intrigued by the history of the game as it is so closely linked to OD&D's, my main impetus here is to check out the solo aspect. I'd like to go on a dungeon crawl and roll some dice.

I haven't read it in years, but I like Tunnels & Trolls. It is not D&D. The vibe is very different.


I'm still curious, though. If you do pick up T&T, please report.

I'm still curious, though. If you do pick up T&T, please report.

I wanted to comment here that I added more info at the bottom of the post, with a link to three online solo T&T adventures. I'll be trying these next.

I did a full on review of the 7.5 edition here:
http://aliveandoutofprint.org/forums/articles.php/?p=130

(If you can't read the comic picture section, its on my own blog at a much larger size as well!)

It might be a good read to get a better idea of it.

Thanks Captain Rufus! I'm still soaking in T&T, but I feel it's worth checking out further when I have the time. I'm going to read your review of 7.5 right now.

It's great to see a blog of this quality. I learned a lot of new things and I'm looking forward to see more like this. Thank you.