“MANTICORAS: …a tail full of iron spikes. There are 24 of these spikes in a Manticora’s tail, and they can be fired 6 at a time in any one direction with the range (18”) accuracy and effect of a crossbow.”

Thus, a Manticora can fire these tail spikes four times before depleting its supply. I assume these grow back over time should the Manticora survive an encounter. I would handle this tail attack by selecting one target, and rolling to hit six times. Each hit would cause 1d6 damage. A referee could also handle this attack like a 6d6 breath weapon, or even allow the Manticora’s tail spikes to hit three adjacent targets, rolling to hit twice against each. Lastly, it does state ‘can be fired’ and not ‘are fired’ 6 at a time, so a referee could also allow the Monster to fire from 1 to 6 tail spikes at a time, I suppose. Given their ability to fly, and their unique missile attack, Manticoras are a potentially treacherous foe.

“HYDRAS: …large dinosaurs with multiple heads…each head is represented by one hit die of six pips…ten-headed Hydra would fight as a 10th level fighter even when it had but one head left…all of a Hydra’s heads can attack simultaneously.”

Hydras are essentially large Monsters that are slain by cutting off all of their heads. Each head behaves like a separate 6 hit point Monster, using the attack capability of its body. The Hydra is truly unique amongst Monsters in this edition given the number of attacks it is able to employ in a single melee turn. I’ve never liked Hydras in D&D, but after reading this entry and considering the rest of the Monsters, I have earned new respect for this beast.

“CHIMERAS: The goat’s head can gore with its long and sharp horns, the lion’s head can tear with its great fangs, and the dragon’s head can either bite or breathe fire.”

I interpret this Monster to attack once per melee turn with each head, like the Hydra. It is not slain by attacking the heads specifically, and I assume that all three heads fight to the death. I think a little home brew might be in order, where whenever the beast is reduced by one-third of its life total, a random head is ‘dead’. I’d also only allow the dragon’s head to breathe fire three times per day, like Dragons.

“WYVERNS: …relatives of Dragons, but they are smaller and have but two legs.”

Poison is a funny topic in this version of D&D. I always made the assumption that poison had been of the ‘save or die’ variety from the beginning. I even stated as much in regard to the Death Ray or Poison column on the Saving Throw Matrix in Men & Magic. I assumed that column was for ‘save or die’ threats. Later in that volume it was mentioned that poison was ‘save for one-half damage’, so I took this to mean in regard to Green Dragon breath. Although there is no specific mention of any ‘save or die’ poison threats in Volumes 1-3 (other than perhaps the M-U spell Cloudkill), I personally treat Poison Potion as save or die, and in my games Spiders and Traps are often of the same type. For both Wyverns (and later, Purple Worms) I use the Dragon method, save for one-half damage. Whereas Dragon breath damage is equal to the Monster’s hits, I simply rule that poison stings from Wyverns (or Purple Worms), are equal to their HD. Thus, a Wyvern’s poison sting deals 7d6, save for one-half.

A huge section of details and rules for Dragons in Volume 2. No surprise there, of course. Most of the information is straight-forward, but it is worth reading over. The description here is very close to what ended up being released in the Monster Manual. I suppose the Dragon in Volume 2 is an example of the direction that Gary Gygax would take once he had time to cogitate and play around with all of the Monsters for AD&D. One aspect of this version of Dragons is that there is no guide for detailing how large these beasts actually are. The later rules made Dragons so large that they were difficult to squeeze into a dungeon without properly planning around their lair. Not so in Monsters & Treasure. I’m thinking of the St. George types here. Assuming a small Dragon might be horse sized, a standard one half-again that size, and ‘very large’ ones two or three times that size, Dragons would still be menacing, but could actually fit into and roam around most dungeons, even through ten-foot corridors and tunnels. This is open for interpretation, of course, and it does go on to state under the Subduing Dragons guide that no more than eight man-sized creatures can attempt to subdue any one Dragon. This gives us some clue to the size of the beast. I’d assume that means the ‘very large’ Dragons have a body about 12’ long (and perhaps 24‘ long with tail) in original D&D. Just my take on it, which conveniently allows Dragons to prowl the underworld without me having to worry about how they manage to do so being twice that size (48’ long for a Red Dragon in 1e). Counting tail, that would make my Dragons 12’, 18’ and 24’ long, respectively. 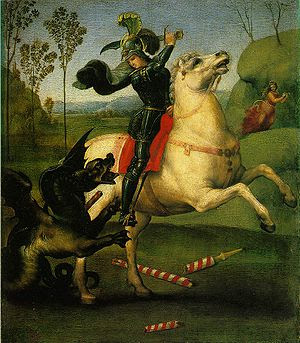 The above example being a very young, small Dragon. Clearly St. George got off lucky as Mama Dragon never showed up (perhaps she is still sleeping upon her pile of gold beneath the earth) and never let anyone forget of his magnificent, heroic feat!

“Value of Subdued Dragons: Subdued Dragons can be sold on the open market (going out of existence in the game) for from 500 to 1,000 Gold Pieces per hit point it can take…Of course the characters who subdued the Dragon could keep it in their own service or sell it to other players for whatever they could get.”

I’ve never actually seen a game of D&D where the players pulled this trick off. It seems to me that old school players probably took the name of the game to heart, and entered Dungeons hoping to find some Dragons that they could actually subdue, sell and retire off of. I like the fact that it mentions the Dragon goes ‘out of existence in the game‘, and that they can be sold to other players. It really adds to the magnitude of Dragons in the game, that each is an important aspect of the campaign, and selling or owning one has a lasting impact on the game world.

~Sham, Quixotic Referee
Posted by Sham aka Dave at 10:02 AM

re: Poison - thank you! I like the concept of poison damage mimic'ing the HD of the creature and like you, I have assumed that the vast majority of poison was "Save or Die", unless I felt like houseruling it. For instance, weak/small Giant Centipedes might not be save/die type of poison, but it still sickens/damages you.

This makes me consider dragons a bit differently as well. If the party comes upon a small dragon, subdues/sells him off, Mama or Poppa might come looking for payback...

I like your calculation of dragon size! It fits perfect!

In Chainmail, i think dragons can breathe three times before they must rest for one turn, so may break fight and come back later [but I'm not sure the chainmail shouldn't be counted as a round in od&d... which make them very nasty critters].

I think it's Horror on the Hill that actually contemplates PCs subduing a Dragon, to the point that there's an illustration of the happy event.

I, too, like your calculation of dragon size, but I'm going to talk here about the Hydra.

Sure, all of its heads can attack simultaneously, but that's not really what got you:

The Hydra is truly unique amongst Monsters in this edition given the number of attacks it is able to employ in a single melee turn.

Not really, it gets the same number as any other: One per hit die.

Unless, of course, you're using the alternative combat system...

When I discovered that 2D6 were used at the very begining, I understood a lot of things unclear about d&d.

@snorri - you said: "When I discovered that 2D6 were used at the very begining, I understood a lot of things unclear about d&d."

How so? What kinds of things?

A few examples:
- why 'NPC reaction rolls' and 'turn undead' used 2d6. Same for morale in Moldway.
- why goblins and the like had -1 penalty to hit and damage under light, while generally penalties for bad conditions of fight were about -4. On 2D6 to hit, a -1 penalty is strong, and -1 on 1d6 of damage also.
- the low abilities modifiers fits better on 2d6 than on 1d20. with 18 of strength, it gives you a good help to have +1 on 2D6, while on 1d20 its rather poor (it explain more clearly why it become a +3 later).

- It has been proposed, but I do'nt remember on which forum, a solution to use armor class with 2D6, which fits pretty fine.
- i think on odd74, I read that at the very, very begining, abilities were also on 2d6 - which could be interesting.

Sham, you are simply brilliant in your observations regarding sizes of dragons. With your 100% logical deductions, even the very biggest of dragons (huge, ancient reds and golds) can wander around through dungeons. Freaking awesome! :D

I've been wrestling with just what size to say the bloody dragons in BEMCI D&D are since day one.

Your answer for OD&D here is so elegant, I'm tempted to lift it wholesale! May I?

BECMI strongly enforces Sham's reading, as it reveals the 'red box' dragons are the small ones, and gives stats for double and triple size dragons.

I effectively remember PC's subduing and then selling dragons in my first games... Does the economic crisis have an impact on the price of dragons?

Will: Yes, I often assume the alternative system while reading. Still, I think there's enough in the description to support my interpretation. On the other hand, one could simply rule that, for example, a six headed Hydra could engage up to six opponents at once, but still only dealt 1d6 damage, at a maximum, to any one target.

Taichara: Of course you may, please do!

re Dragons: Thanks for the comments. I had to consider this without allowing my AD&D 1e image of Dragons to get in the way.

Thanks for all of the comments, and sorry for the delay in responding.

I agree with Will above that the hydra gets the same amount of attacks as any other creature. However, I think it is unique as you do, but by virtue of being weaker. Other monsters (and heroes, etc. in chainmail) get one attack per HD, regardless of damage taken. The hydra, however, loses attacks as it takes hit points.

It seems better to envision it as a body of 1 HD monsters who just happen to save and attack as if they were the hydras full HD.

The post is very nicely written and it contains many useful facts. I am happy to find your distinguished way of writing the post. Now you make it easy for me to understand and implement. Thanks for sharing with us.