Out of the Frying Pan

Well, actually off of the Back Burner:

I'll be covering some of my future plans and projects over at Three-Headed Monster Games. Some of the tidbits discussed there will be linked here now that I have a new sharing account after the Orbitfiles debacle. Thanks for the various suggestions, but I've settled on MediaFire for the time being.

In the meantime I'll clutter my bandwith here at Ye Auld Grog & Blog with the scans I made. Apologies for the smudges in certain areas; my printer didn't want to cooperate with the way too think paper I was forced to use, but the images get the idea across effectively. There is one Open Office file and a pair of PDF's I've shared on MediaFire. The first of the files is Sham's OPD Template, seen below: 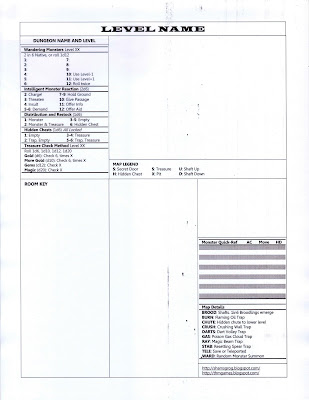 Using the "Check Method" will require the Open Office file entitled Treasure Tables. Once you grok the Check Method the small table on both the example and template will make sense. It's not nearly as complicated as it might at first seem; you'll grasp the idea quickly and find that it's simple as can be.

Finally I made a quick PDF of an Example OPD, borrowing old info from the Dismal Depths, level 1B; The Chambers of Zod. There's an error I just spotted on the map (forgot to change the 1A bit), but I'm sharing it just to give an example of the new template version, as seen below: 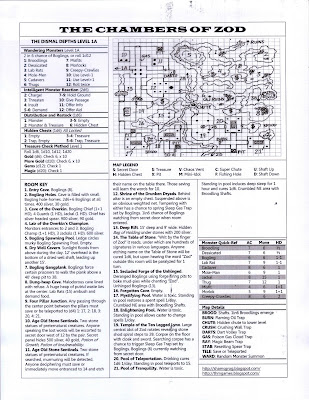 Feel free to dl the template, change the tables, add to it, whatever. More information can be found in my post over at the THM Lair (AKA the Head Shed).

~Sham, Quixotic Referee
Posted by Sham aka Dave at 1:31 AM

Wow - that treasure table is very interesting! I'm going to save that one to the old binder for possible use later. The example is VERY helpful.

I agree, the contest really showed me the possibilities of getting a dungeon on one page, and multi-column text area made an impression on me as well. You've done a fantastic job of making it work.

Thanks Chgo. I'll dress the TT up a bit, but it's an example of the kind of thing that will wind up in the DD Appendix.

the hardest thing I found with the OPD format was trying to make sure it could be used/understood by someone else. How I would use it and what sort of template I would want for my PERSONAL use is much different than what I'd want for a public project. They seem to be two different beasts

@moonlapse - that's the beauty, from my perspective. I have no control over how someone else will use it. I present the bare facts of what I have in this dungeon, and I let them interpret/use it as they wish. Most of the time, other DMs will do exactly that - they'll discard a lot of the setting in favor for bits and pieces. By setting up a skeleton, the DM is free to add the rest as they wish.

Now, having set up the OPD, I may have a page all to myself explaining how I want to interpret it.

great template -I like the treasure table and its good that you got the intelligent monster reaction one on there -MINT !

Moonlapse: I agree, but that's part of the fun part for me, the challenge of getting my ideas across. Inevitably there is tons of room left for creative expansion.

One can easily take the latest template linked here and remove those tables altogether, ending up with a clean three-column version.

They're on there to give ideas/inspiration.

Chgo: Yep, as you and I discussed earlier this year, companion notes might be warranted in certain places, but not being "on the page" can be ignored/picked over.

Sean: Thank you. At first I was iffy on the Reaction Table, but I found that I liked the finished result quite a bit once I tested it out.

The TT and Check Method just sort of hit me while I was mocking up a table for my latest FO! submission, and it grew from that "moment of lucidity" shall we say.

One could even devise rules using the Check Method for a combined RTH/Damage system (although it would be far afield of D&D).

Thank you . To all participant, please have a look at our updated contest post.
more templates easy to download