The Underworld & Wilderness Adventures
THE UNDERWORLD

“Before it is possible to conduct a campaign of adventures in the mazey dungeons, it is necessary for the referee to sit down with pencil in hand and draw these labyrinths on graph paper. Unquestionably this will require a great deal of time and effort and imagination. The dungeons should look something like the example given below, with numerous levels which sprawl in all directions, not necessarily stack neatly above each other in a straight line.”

Volume III gets good, and it gets good fast. If you didn’t know how to play D&D yet, The Underworld & Wilderness Adventures dives right in and tells you with its opening words that the game is played by adventuring in dungeons created by hand by a referee. That the dungeon was intended to be the central focus of Dungeons & Dragons, there is no doubt. Jumping ahead to THE WILDERNESS section, p. 14, we find passages that support this fact. Everything mentioned in that section speaks to the areas which surround the dungeon. The campaign grows forth from the dungeon, its centerpiece.

One need not limit a D&D campaign to dungeons, clearly, but the theme is obvious. The dungeon is the anchor. A village, town or city and the immediate terrain surrounding the dungeon serve as extensions of this underworld affair. This then is how the game is played. What the characters may do outside of the campaign’s focal point is discussed in THE WILDERNESS section.

Step one in preparing for the game is to draw the dungeon. It doesn’t get any clearer than that. 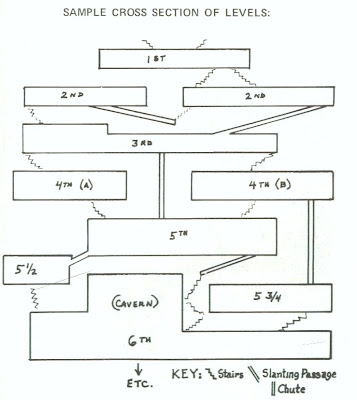 The SAMPLE CROSS SECTION OF LEVELS example provided on p. 3 conveys the fact that dungeon levels should be sprawling and convoluted. I’ve found laying out such cross sections for dungeons unnecessary, but the end result can be nice to look at. The authors go on to say that the levels shouldn’t stack neatly, one on top of the other. I’ve found that such concerns are likewise superfluous, the end result being that the players rarely know the difference. I contend that it’s perfectly fine for levels stacked on top of one another, as long as the individual level maps are interesting in and of themselves.

I have made dungeons in both ways, and I doubt I’d bother worrying about a cross section except for one reason, and that is keeping track of all of the entrances or exits to and from the dungeon itself. The cross section is perfect for such details which are easily forgotten after a referee undertakes the long process of filling a large dungeon.

Readers will notice that the term “dungeon”, as described here in Volume III, is in fact what we now call a “megadungeon”. Thirty-five years later we have found the need to redefine the very term used to name this grand game by adding a prefix. The truth of the matter is that what we now call a megadungeon was indeed what the authors had been using to run their campaigns, it’s just that they called it a dungeon. Perhaps “Megadungeons & Manticoras” didn’t have quite the zing to it. I wonder who coined the megadungeon term in the first place. It’s certainly a necessary evil now in the current gaming era. It begs the question though, were there minidungeons in 1974?

I’d also like to mention the usage of the term “campaign” here, “conduct a campaign of adventures” is the proper usage. A campaign is a collection of adventures. As we will see, the campaign is also the world which emerges from these adventures. Everything that evolves from the ongoing adventure, the continuing gaming sessions, is all a part of the campaign. These features together can form a setting, or world, but the campaign itself is the collected adventures of the players within a referee’s games. A campaign which is started by drawing a dungeon, and defined by the actions of the players.

~Sham, Quixotic Referee
Posted by Sham aka Dave at 6:01 PM

When I read of the history or I read the LBBs, for me it is useful to keep in mind that these were wargamers who saw things in those terms. A campaign could reference a series of battles/scenarios that the players engaged in. If we think of the dungeon as the battlefield, it makes sense that the wargamers would focus on the dungeon as the field of conflict and focus on that.

With all the thoughts about the wargaming background - I am sure pining for a good game of Squad Leader!

I always wanted to learn SL or ASL. I got involved in plenty of wargames back in the late 70's and early 80's, but I feel like I really missed out by never playing SL at all.

Early OD&D was probably filled with numbers crunchers and metagamers, but the rules and the referee saw to quashing such tactics better than the modern iterations which attempt to balance everything with twenty-times as many rules. Maybe this was due to the fact that the referees were also wargamers?

I’d also like to mention the usage of the term “campaign” here, “conduct a campaign of adventures” is the proper usage. A campaign is a collection of adventures. As we will see, the campaign is also the world which emerges from these adventures. Everything that evolves from the ongoing adventure, the continuing gaming sessions, is all a part of the campaign. These features together can form a setting, or world, but the campaign itself is the collected adventures of the players within a referee’s games. A campaign which is started by drawing a dungeon, and defined by the actions of the players.

Yes. This is EXACTLY what I have in mind for my own campaign, and you've now given me a starting point for an eventual post.

Glad you got something from the post. Everytime I re-read and consider the first three volumes, I'm not only altering the ways I think about D&D, but I'm at the same time amazed that this general DIY whole cloth theme simply ended a few years later with 1E.

Vampires is not at all like in the movies or books. Sure, I understand. You are young you have the whole world open to you. You can be anything that you choose if you apply yourself and try hard to work toward that goal. But being a Vampire is not what it seems like. It’s a life full of good, and amazing things. We are as human as you are.. It’s not what you are that counts, But how you choose to be. Do you want a life full of interesting things? Do you want to have power and influence over others? To be charming and desirable? To have wealth, health, and longevity? contact the Vampires Lord on his Email: Richvampirekindom@gmail.com