Ware the Queen of Faerie Twisted 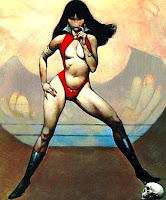 More on my scribblings as I collect my themes for The Lower Caves. As you can see this is a work in progress, and much of this will evolve as the adventure itself is hammered out. This theme will encompass three distinct regions of the adventure, and will provide the main storyline for this level of the dungeon. Another theme, which will serve as a subplot for the adventure, is based on information provided by Calithena, the original designer of The Darkness Beneath. A great adventurer, Jalen Longspear, has established and maintained a safe haven within the depths here on this level, the infamous Halfway Inn. I have grand plans for Jalen and his inn, as well as his staff, and as soon as I flesh these details out more I'll add some tidbits here to the blog.


Ware the Queen of Faerie Twisted

Ylfrit, Dark Faerie Queene of the Unseelie Court, is imprisoned within an ancient Labyrinth of Fae Magic deep beneath the surface. Cursed by Hjorvart Alfar-King with Eternal Slumber, Ylfrit dreams restlessly hidden away from mortal eyes for centuries uncounted. Unaware of the coming of the Time of Man, and the sundering of the world that heralded that epoch of great change, Ylfrit continues to plot her nefarious plans. Ylfrit’s dusky, lithe figure trembles and murmurs as her fell dreams roll on, unabated by the ages. While Fae Magic has dwindled and continues it’s steady decline within this world, there are still wildly potent pockets and nodes of this ancient magic tucked away in remote locales. The Lower Caves is one such place with hallowed wellsprings of Fae Magic, given rise by the presence of both Ylfrit and the Alfar.

The dark dreams of the sleeping, imprisoned Ylfrit have influenced the surrounding area with the chaos of unreason. Men tell tales of the Twisted Faerie Queen, as she has come to be known. Legend holds that the grim visage of the Twisted Faerie Queen visits men in their dreams, promising wealth and power if they but follow her call. It is said that she is the harbinger of ruin, and that those who seek her out wind up mad, gibbering fools. The tales of her vast treasure have propagated this legend, that the wicked Queen holds what men desire most, and can grant wishes, or fulfill desires.

The Alfar are an ancient race of immortal Fae who once held domain over this world in a bygone era. Their life essence is tied to the abating Fae Magic which at one time was the very force which held this world together. Cursed by the Unseelie Court and their Dark Faerie Queene, the Alfar became imprisoned in the depths of the world, unable to ever again see the light of day. After the demise of their King, many of the Alfar left their brethren behind as the once unified race became fragmented and disparate. The Alfar who remained near the Mound of the Alfar-King established a unified group of Loyalists amidst the damp, dark stone of what was to become, in later ages, The Darkness Beneath.

As the chaos of unreason born of the gloomy dreams of the sleeping Dark Faerie Queen began to enfeeble the Fae Magic which is the Alfar existence, the Loyalists eventually became separated as well. Now there exists within The Lower Caves two separate factions of Alfar at odds with one another; those still loyal to the long dead Alfar-King, and those who blame him for their plight. The Loyalists and the Denouncers have been at a stale-mate for decades; neither faction strong enough alone to actually deal with their dilemma, and neither willing to sustain the costly toll on their own number that outright conflict would incur. Instead, the Loyalists and the Denouncers undermine one another’s efforts at every turn, both blaming the other for their impasse while the insidious dreaming of the corrupt Ylfrit continues its unraveling effect.

The Loyalists protect and gain power from one of the three venerable sources of Fae Magic here, the Mound of the Alfar-King, and wish to redeem his reputation by destroying the Dark Faerie Queen for good, and in so doing ending the encroaching chaos of unreason as well. The Denouncers guard and receive power from another of the age-old nodes of Fae Magic extant within these caves, the Alfar Spirit-Circle, and believe, incorrectly, that the Dark Faerie Queen must be awakened to lift the Unseelie Vex, thus granting them the ability to again see the light of day. Both factions know that if they could control the other’s source of magic, they would be that much closer to accomplishing their goal. Additionally, both have tried, thus far in vain, to further their efforts by allowing mortals to become entangled in the struggles of the Alfar. Many men have sided with the Loyalists, or the Denouncers, but the deadlock has not shifted while the souls and minds of the mortals involved have been shattered and lost for all time. The factions have found that the promise of the legendary treasure of the Twisted Faerie Queen has lured many mortals to their cause, willing to risk both life and limb in the pursuit.

No, I'm neither a poet nor a writer, but I sure enjoy putting D&D adventures together, and I hope you'll do the same while reading and playing this one once its in a completed format.

~Sham, Quixotic Referee
Posted by Sham aka Dave at 1:21 AM

Dreams of men afore the Dawn
One by one, your souls be gone

which doesn't fit the rhythym already established, how about:

Dreams of men afore the Morning
One by one, your souls unborning


Okay, sure, I don't know what the hell 'unborning' means, but it doesn't sound good. Sounds to me like not only are you dead, but you never even lived. Makes me shudder. More importantly, it doesn't twig my "wrong-o-meter" like your original did.

(No offense meant, of course; it's not something I can control.)


Other than that one little quibble, thought, I love it and can't wait to see the finished project.

Sorry; "thought" above in that last sentence should have been "though".

Thanks Will! It was somewhat late when I was hashing that out, as well!

Actually, that little bit would've driven me crazy if I hadn't noticed it myself later...you're right on the money and I didn't catch the fact that those two lines are both off kilter by one syllable. I had indeed intended it to be eight-eight all the way through.

After I sip more coffee this morning I'll take another whack at it (and yes your suggestion is keeping in line with the flavor I'm trying to establish).

This is fantastic! I've always held a much more Seelie/Unseelie celtic mythology view of my feyfolk than the standard Tolkienesque versions, and now I'm jealous of the insane amount of awesomeness you've put into your fey.

Thanks, Ishmayl! I'm currently working on a few projects, albeit very slowly. My latest changes in regard to Lower Caves retains the flavor of the last few posts, but I decided that the final product should be less campaign/history defining. In that way individual Refs could more comfortably introduce these new bits without having to alter their own campaigns too much, if at all.

Essentially the adventure will have a bit of mystery, some intrigue, opposing factions, a splash of the uncanny, and the Halfway Inn smack in the middle of the convulted mess. In short, I hope I am not biting off more than I can chew with this one.

Did you know that that you can make cash by locking special pages of your blog or website?
Simply open an account on AdscendMedia and run their content locking tool.