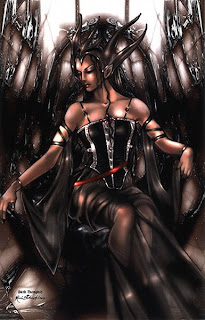 Here's a bit I've been kicking around tonight which might serve as the Background portion of The Lower Caves of The Darkness Beneath.

The Alfar, Hjorvart their King, and the Dark Faerie Queene

Before the shadow of man stretched across this land, and before it was split asunder by fiery volcanoes and shattering quakes, this world was governed by the laws of Fae Magic. The Fae ruled the Four Corners and oversaw the Day and the Night as well as the Four Seasons. The Dawn of Man heralded change, though. Fae Magic began to lose some of its sway over the world, and the magic of man, or Young Magic, began to drain away the power of the Fae Magic. During that age when the Dawn of Man was a prelude to the Time of Man, one of the most powerful Fae races was the Alfar. The Alfar ruled the Four Corners, while the Seelie Court ruled the Day, and the Unseelie Court ruled the Night. The Four Seasons of the world were the domain of the always quibbling Lesser Fae.

The Alfar King, Hjorvart, knew that the once potent magic which held this world together, and was the very life force of the Fae, was slowly diminishing. Across the years, the Alfar had been forced to relinquish much of their rule over the Four Corners to mankind and the Lesser Fae. Seeking to muster the forces of the Fae, Hjorvart wished to beseech the Seelie Court to form an alliance between Alfar and Faerie, that together they might form an insurmountable front against the encroachment of this magic of man. In his desperation, the King of the Alfar unwittingly allowed himself to be duped by the Dark Faerie Queene of the Unseelie Court, Ylfrit. Ylfrit wished to claim the Fae Magic of the Alfar for her own dark designs, for she knew her sister, the true Faerie Queene of the Seelie Court, would never include Ylfrit and her Dark Faeries in such an alliance. The Dark Faerie Queene needed to conduct her treachery far away from the eyes of the Seelie Court, and so lured Hjorvart and the remaining Alfar deep beneath the surface, where she had convinced the King that the Fae Magic was strong and vibrant.

Ylfrit’s plan was to enslave the Alfar in the dark recesses of the underworld and put their Fae Magic under her control. Albeit waning, the collected arcane Alfar magic would allow Ylfrit to topple and disband the Seelie Court once and for all, while she laid claim to the title Queene of Fae. Ylfrit hadn’t counted on the Alfar resilience being her own undoing. Realizing that he had possibly led his people to their doom and finally recognizing Ylfrit’s true identity, Hjorvart gave instructions for his Alfar to construct a Labyrinth of Fae Magic. The King then sacrificed every iota of his magical life force to empower a Curse of Eternal Slumber upon Ylfrit. The Alfar then imprisoned the treacherous Dark Faerie Queene within the Labyrinth deep beneath the surface. It was too late, though, as Ylfrit’s plan had already begun, and her own Unseelie Vex had taken hold. The Alfar had been cursed by Ylfrit and the Unseelie Court to never again see the light of day; they were also imprisoned far beneath the surface despite the valiant efforts of their heroic King, Hjorvart.

The magic of man was able to move forward unimpeded now, as the Seelie Court alone was the only cohesive group of Fae left to witness the coming of the Time of Man. Fae Magic is now more fleeting, elusive and ephemeral in nature compared to that bygone age when the land was ruled by the Fae in their myriad incarnations. The Fae have survived to this day, but their world governing power is now a thing of myth and legend. The Lower Caves are the very spot where Ylfrit enacted her devious plan, and the Alfar are still there, along with the sleeping Dark Faerie Queene. They are, of course, not the only ones in the Lower Caves, as you shall soon see.

It needs some work, but this will be the predominant theme. My ideas are swirling around, but are finally beginning to find their way into written form. Now if I can possibly translate it all into a cohesive adventure, it will gain momentum very shortly.

~Sham, Quixotic Referee
Posted by Sham aka Dave at 10:40 PM