We were using illustrations to imagine what Orcs, Gnolls and Kobolds looked like. These images have ingrained themselves into my own understanding of what said Monsters look like. D&D as a whole has defined not only images through illustration, but also actual terms. I'm ashamed to admit that until recently, I actually thought that a Troglodyte was an evil subterranean Lizardman. I'm sure there are other examples and assumptions I've made which can be attributed to a one Mr. Gygax of Lake Geneva, WI (R.I.P.)

As I've mentioned before, in converting to OD&D I often find myself striving to engage in what I call 'AD&D Disassociation', the exercise of reimagining what these Monsters not only look like, but also tailoring them and perhaps tinkering a bit with their traits and abilities.

I've often wondered what it was like to play OD&D back before the Monster Manual filled in our imaginations for us. For example, imagine playing D&D when the following two illustrations by Greg Bell were your point of reference. These are found near the end of Supplement I, Greyhawk. 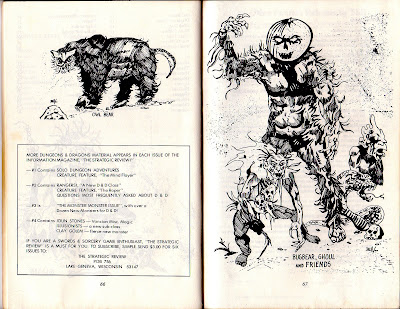 Of particular interest to me is the Bugbear drawing. It has been said that this was a miscommunication between Gary and Greg; and in fact when relating what he imagined the Bugbear looked like, Gary meant a big roundish head when he said "A head like a pumpkin...", and not an actual pumpkin. Nevertheless, the illustration stayed as originally drawn, with a big pumpkin-headed Monster.

So for about three years, every D&D player was battling pumpkin-headed Bugbears. That is, until the Monster Manual was published and set everyone straight.

But what about the Monsters with no illustrations provided for the referee to reference? Surely Orcs weren't pig-snouted, and Kobolds weren't little scaly dog-things.

I've received inspiration in my AD&D Disassociation efforts from Jeff Rients and Driver aka Scott, among others. Originally from Jeff, and recently from Scott (in particular from Scott in my own retooling of the Solstice Elves).

Solstice includes greedy, evil Gnomes and Frankenstein Monster Ogres, as well as Kobolds as player characters, and Goblins as beings spawned in pools from the very essence of Chaos in the Deep Down Underworld.

So, while I enjoy being creative and trying to remove the Monster Manual images that have been with me for decades, I have decided to tip my hat to Greg Bell's misunderstanding and include pumpkin-headed Bugbears in Solstice.

The seeds contained in their pumpkin-heads can be gathered and planted in order to grow more Bugbears. Thanks Greg Bell, your little mistake has helped me further disassociate myself from those AD&D images.

I once asked Gary about the pumpkin-headed bugbear. He explained that it was the result of a misunderstanding on the part of Greg Bell, the artist. Bell didn't know what a bugbear should look like, so Gary said, "Big furry guys with these heads shaped with a pumpkin or football." Bell took it literally and thus was born the guy in the illo at the back of Supplement I.

I knew I wasn't making that up! I'm sure I heard about this from James in the past, but there ya go.
Posted by Sham aka Dave at 9:01 AM

Bugbears with pumpkin heads are the bee's knees. Could there be anything more terrifying?

"Could there be anything more terrifying?"

The pumpkin-headed Bugbear raised its waxy orange head again in RuneQuest in the form of the Jack-o'-Bear, which is, well, a pumpkin-headed bear that for some reason can hypnotize you. Glorantha at its finest. :)

The seeds contained in their pumpkin-heads can be gathered and planted in order to grow more Bugbears.

Okay, that is just awesome!

Check out the Pumpkin Man from the RAGE CCG.

Stuart: The more I think about pumpkin-headed Bugbears, the more evil and downright diabolical they become. Thanks for that image!

Will: Thanks! That wacky notion sealed the deal for me.

Scott: Aha! Jack-o'-Bears! I didn't know if they were a D&D thing or not. Hypnosis, huh?

Max: Sorry, that link made me laugh out loud. Thumbs up!

Noisms: Funky, weird and clearly the embodiment of Chaos itself. Absolutely terrifying!

I'll have to do a write up on the Solstice Bugbears soon.