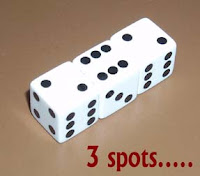 As a tribute to Gary, and in his honor, I decided to roll up a D&D character on the day of his passing. Straight 3d6, six times, in order. I carefully selected three six siders I felt would do this momentous undertaking some justice, and made a quick warm-up roll, as I am wont to do so often.

So, with that I proceeded to roll the next five attributes. I couldn’t believe my luck. It seemed almost improbable. I ended up with what is likely the best set of attributes I have ever seen for a straight 3d6 character. 18-13-14-16-10-14.

These dice were hot! So, I kept rolling. 8, 9, and 7. I stopped there. The dice had cooled off instantly.

I have not yet decided what to do with this character. It will certainly end up as a NPC in my campaign.

Honestly, it seems like a waste to not play this set of attributes as a PC, but I doubt anyone would ever believe those rolls unless they had been here to witness them.