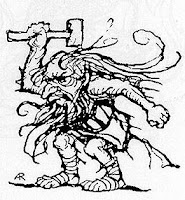 A month has passed now since I took the plunge and got those PDF copies of the original D&D (OD&D) books, volumes I-III. I’ve been spending hours and hours tailoring my Solstice setting for the Of Fortunes and Fools campaign using the original books written as a guideline, a tool kit. The creative freedom that OD&D has given me is perfectly suited for my style of campaign design. It’s allowed me to take all of those notions and conceptions that I had about ‘the rules’ and shatter them. I was always a fairly hard core home brewer with AD&D, inspired mostly I think by Arduin and it’s wackiness, but that was mostly just *adding* new races, classes, monsters, spells, artifacts, etc. Now, I am working with a basic guideline and I am defining the actual rules and descriptions to my own taste. It’s an entirely new level of home brewing. And I am totally hooked on OD&D now. I haven’t even played a game using the rules yet, but I can tell that with the amount of creative effort I am putting into this, Solstice will truly be ‘my world’. Maybe the first time I can call a setting that, it’s truly mine.

Through all of my internet research, I’ve come to realize that basically every DM playing OD&D is doing the same thing to a certain extent. What I mean is that we are all doing something different, yet the same. We are all home brewing, maybe not to the extent that I am, but we are all making stuff up and creating something unique. This is not Greyhawk or The Forgotten Realms here. This is not AD&D with it’s rigid rules set. It’s all new, if one can call playing OD&D ‘new’ at all. It’s really made me appreciate the works of Gygax, Arneson and Hargrave in an entirely different way. While I am not using their OD&D settings (Greyhawk, Blackmoor, Arduin), I can see in a new way where they were going with these worlds. Maybe I was just a little slow on the uptake, being so deep into AD&D for as long as I was, but I see now that DM’s were doing this very thing in the 70’s. Everything was, essentially, home brewed.

Then AD&D came along. Theories abound concerning the impetus behind such a rigid, encompassing set of rules. TSR wanted to have a concise set of rules for conventions and tournaments, or that TSR was trying to ‘shut down’ the home brew competition by making D&D much more rigid, or (much more likely) TSR was trying to generate more revenue by making a more desirable ‘advanced’ product. Whatever the case may be, AD&D in my opinion stunted the creativeness of a lot of DM’s back in the 80’s. I do appreciate AD&D for what it is, and I still consider The Dungeon Master’s Guide by Gygax to be one of the finest role-playing products ever printed. Unfortunately, it just sent D&D down a more narrow path.

Now, I also realize that a lot of players probably appreciated the AD&D approach more. Things were more defined, there weren’t as many surprises, monsters were recognizable, there was a certain comfort level. You knew going in how pretty much everything worked. AD&D probably saved the world from a lot of bad D&D sessions by helping define everything. I think a good OD&D campaign requires a more advanced DM, someone capable of taking these very basic books and creating a living, breathing, cohesive world out of them. It’s like rolling into a strange town, your first night out you need to pick a place to eat…you can go to a known quantity, say ‘Chili’s’, or you can be a little adventurous and head over to ‘Mack’s Ribs’. You pretty much know what to expect at Chili’s, and maybe Mack’s is terrible…then again, maybe Mack’s is the best joint around. Personally, I’d pick Mack’s joint.

Solstice, I hope, will be the best joint in town for my players once we start the new campaign.
Posted by Sham aka Dave at 2:34 AM