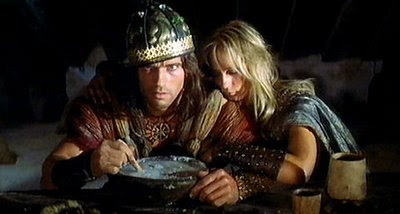 So pretty much what I’ve been blogging about is my view on D&D, or recollections of my D&D memories. I realized during all this rambling that I am a “Defeatist D&D Player“. While I will openly espouse the virtues of the greatest game ever (no, not golf) within the confines of the internet, and amongst fellow known gamers that I find therein, I’ve never been a walking advert for D&D or gaming in general. This has caused me to lose touch with D&D for the most part. I have not broadened my potential player base since the early 80’s.

It’s always been a dirty little secret of mine. Maybe that’s insecurity, I’m not sure. Here I am, 41 years into this life of gaming, and I still conceal my favorite pastime from friends, neighbors and coworkers? WTF I ask myself? Why?

I blame my childhood pals from the block, the neighborhood where I grew up (well, in theory only, my Wife will vehemently dispute my status as a grown-up). I had managed to discover D&D on my own, self-taught and met a few other like minded wannabe gamers in school. I would meet up with some of these other kids and play after school in our basement at my parents house.

Now, back then, where I grew up, there were lots of kids within a similar age range, most within 2-3 years of one another. Pretty much daily, before I discovered D&D, we would go knock on one another’s doors and join up to either:

1. Play street football
2. Play pick-up hoops
3. Shoot fireworks at the Wrights’ house, or
4. Sit around and argue whether Ted Nugent was the greatest guitarist ever.

Now, this was all fine, and I enjoyed most every delinquent activity we joined together in, but…as soon as I started playing D&D, I couldn’t find refuge from my positively NON D&D pals, even holed up in our basement. During a game, my Mom would inevitably at some point come downstairs to check on us, and tell me that Johnny or one of the other NON D&D gang was at the door, looking for me. I would have to go explain to whomever it was that we were busy playing D&D.

Suffice to say that this was never a good answer as to why I wouldn’t join the neighborhood pals in some 70’s standard fare fun and games. After much ridicule, I realized then that playing D&D was just not acceptable. This was ingrained in me during those very first few months of playing. It was later underlined and high-lighted once I started playing at the after school D&D Club in high school. I told absolutely no one that I was a member of said club. After all, I had an ‘image’ to preserve.

I managed to preserve this image through high school, and hone the skills needed there to blend in with various cliques and become a fairly well-rounded semi-popular guy. The majority of my friends were regular, NON D&D Joes.

However, one particular instance truly justified why I had been toeing this line all those years, and not mixing my gaming geek side with my normal social side. Back then, there were no girls in the club, none playing D&D that I knew of. It was Senior year, and I was good friends with a particular gal named Christine. I had a big teenage crush on her, she was cool and into field hockey and girls lacrosse.
Anyway, I decided I would ask her to the Prom. She gushed and said “Yes“, and all was well in the world.

Fast forward a few more weeks, and Christine confronts me with some lame ass excuse about not being able to afford a dress, and that her parents were mad because she had messed up their Saab and it was going to cost a bunch to get it fixed, and they were not going to buy her a dress because of this…and stupid me wanted to believe this. How lame was I? Very lame in retrospect.

Now, I’m never afraid to admit that I wasn’t really girl-centric at that point in my life. That happened a couple years later in college, and in spades, so it’s all good now looking back at those earlier days of viewing girls as alien life forms. Anyway, I bought that line of Bull, and decided I would now have to scramble to find another date. Another gal pal of mine told me what REALLY happened. As it turns out, Christine had caught a lot of flak from the other popular gals, and the quote that got back to me was “You’re going with HIM? He plays D&D….Ha ha ha ha ha!” And with great shame said target of my teenage crush turned around and crushed me.

I got over it quickly, and it wasn’t a big deal. But it was just another straw on the camel’s back. It really hit home once again that my hobby was positively not cool. I haven’t even thought about this for decades, but the topic at hand made me think back to examples of why I have always tried to maintain a super secret alter-ego. It’s quite comical actually.

So although I was lucky enough to make great life long friends with other ‘just regular Joes’ who happened to share my love of D&D, I’ve never been able to meet other players since that old D&D Club in high school due to the fact that I don’t share my interest with anyone other than those I know ahead of time are also gamers. For this reason, I sit here trying to figure out how to get my old gaming group back together and relive those great memories from the 80’s. I’ve managed to defeat my own efforts at pursuing my favorite hobby by being a secret D&D player.