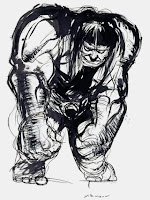 The past three weeks have found me reading, studying and dissecting the original three volumes of D&D by Gygax and Arneson. Primarily Vol. I, Men & Magic. Speaking as someone who is used to playing AD&D, I have found that the original rules for D&D are disorganized and vague. Now, first off let me say that I shamelessly borrowed from the accumulated knowledge of many much more well versed posters at the Original D&D Discussion board. The research and homework required had been undertaken and shared unselfishly by some great members at that site. So, I added some other home brew and even some information which was supposedly used by Gary Gygax in his own house rules versions.

Now that I have spent time attempting to clarify and interpret the class, race, combat, armor and weapon rules, I have managed to move on to Vol. II, Monsters and Treasure. Here, now, is where I have really come to appreciate D&D as originally written. Here is a sample passage from Vol. II describing the Ogre:

“OGRES: These large and fearsome monsters range from 7 to 10 feet in height, and due to their size will score 1 die +2 (3-8) points of hits when they hit. When encountered outside their lair they will carry 100 to 600 Gold Pieces each.”

Couple that with the information from the Monster Reference Table:

Also, their positioning upon the table might be inferred to mean that they are in some way related to other ‘mundane’ humanoids in D&D, but no definite theme other than their being a race of humanoids exists.

That’s it. No drawing, no physical description, no real flavor text about Ogres. The rest is left up to the DM’s imagination. One can play them as is, a collection of numbers and a mythical, large fearsome Monster from legend and lore. Or, one might undertake some real home brewing and make Ogres more interesting. This aspect is why I am having so much fun with original D&D. I can describe Ogres how I see fit.

Eager to sit down and start detailing many of the traditional Monsters, particularly ones I have already placed into my Mega Dungeon Ulin-Uthor, I had to attempt to displace all of my memory of AD&D…how Gary Gygax and others detailed and described those very Monsters in AD&D. The process is two-fold in that I need to not rely on those images I have held to be true for so many years, but I also need to attempt to add some of that very mythological flavor to give said Monsters a fantasy connection for the players (well, a little bit, anyway).

I just put the finishing touches on Solstice Monsters I. A mini supplement of a dozen Monsters I’ll be using in Ulin-Uthor, only one of which is not described at all in Vol. II. My Gnomes ended up being based on some German folklore passages, the Ogres on an idea I had for an area in Ulin-Uthor, and the new entry, Leprechauns, being based on an old version I had worked up for my now abandoned old rules, Blackthorn.

Here, then, is the entry for Ogres as found in Solstice.

“Ogres are huge, looming humanoids with great bulging muscles. Their massive, powerful arms nearly touch the ground, and their rock hard fists deliver punishing blows for 1d6+2 damage. These unkempt, foul beings have an odor which is unmistakable, and they shamble about clumsily, but at an efficient pace. Ogres have a mysterious history. It is not known exactly how they came into being, whether they were created with this world, or whether the union of some eons past races gave spawn to them, as Ogres do not have gender nor do they reproduce. What is known is that there is a finite number of Ogres in he world, and their very existence is threatened by the rise of man. Ogres apparently are immortal, and even those Ogres who have been slain and laid to rest are never truly dead, for their souls are tied to this world. With the proper unearthly rituals and dark magic, Ogres may be brought forth from the shroud of death and reanimated into a suitable body. Ogres are extremely resilient and resistant to many forms of decay and attack, but nevertheless an Ogre spirit needs to be housed in an intact body. Ever so slowly the Ogres of this world are decreasing in number, despite the efforts of their own preservationists. Ogres are not known for their intellect, but rather lack thereof, although their physical might is fearsome indeed. On a roll to hit of 20, the Ogre has snatched up the victim after dealing 1d6+2, and will toss him into a solid object, or smash him into the ground for an extra 2d6+4 damage. Foes hurled in this manner must expend one entire round gathering their senses. Ogres are 7-10 feet tall, 4-6 feet broad at the shoulders, with a reach of 4-6 feet! These creatures are often found to be patched together, comprised of stitched or otherwise connected parts and pieces of various Ogre bodies. Ogres at one time served Giant-kind, and many are still found in such a role, but for the most part these chaotic, destructive Monsters are found in the deep down, following the orders of some leader who might help preserve their existence. Ogres dine almost exclusively on raw flesh and bone, and will attack Elves upon sight, never fleeing or parleying and fighting (as they usually do anyway) to the end. It is not known where this animosity began, but it must have something to do with their origin upon this world.”

Ogres are essentially, for lack of a more appropriate description, some fantastic, magical version of Frankenstein's Monster in the current campaign. With body parts put together in arcane laboratories in the deep down.

I’d like to share my over the top Gnomes and Leprechauns as well, but I don’t want to spoil any surprises my former AD&D players might have when they first encounter these mischievous spirits of the earth.

So, as it turns out, there is simply much, much more that I can detail in my own fashion, or as I go along when putting together an OD&D campaign. I could do the same with AD&D, it’s true, but then…why play AD&D at all?

Now, I really need to get back to Mega Dungeon design!