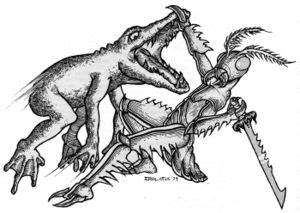 The recent passing of Gary Gygax (after the initial shock passed, and now eight days later) got me to thinking about not only other icons I respected from my younger days that have also now, sadly, passed away (Joey Ramone, Joe Strummer, L. Sprague DeCamp, Akira Kurosawa), but also of David Hargrave. Dave passed away at a very young age, in 1988 at the age of 42.

In 1988, news of this sort didn’t travel very quickly. I think I actually learned of his passing when I purchased AG Vol. VIII, and sadly read the announcement in the front cover. This of course meant that the planned Vol. IX would never been written by Dave. I’m guessing a year may have elapsed before I knew Mr. Hargrave had passed away.

For some reason this also made me recall an adventure from ‘83-84 or so that John, one of our gaming group players had sent us on while he was taking a turn behind the screen, in which we were to rescue a one ‘E'varg-Rah’. It was actually a few sessions later that someone spelled it out backwards and discovered the hidden meaning. I don’t think we ever finished that particular adventure, though. I wonder if John can remember that gist of that one, almost 25 years later…I’d like to know the plot now!

Say what you might about Hargrave, and he did indeed have his detractors, but I always enjoyed the frenetic feel of his ‘Grimoires’. Dave’s creative energy literally jumped off the page in certain areas, and his warped sense of humor was evident in many places.

When our gaming group was heavy into DnD, we were playing AD&D with the three hard covers rules books. Well, we were USING those three books…it was hardly really AD&D. I was first exposed to the Arduin Grimoires when sitting in with a bunch of the older kids, and playing in one of their campaigns. They used the Critical Hit Table (the seminal Hargrave house rule) from AG I, AND the legendary, even nastier Non Weapon Critical Hit Table from AG II. I was hooked, I quickly added the trilogy to my own campaigns…not realizing at the time what I was about to unleash.

Before you knew it, everyone in my campaign was playing Deodanths, Phraints, Throons, Star-mages, Runeweavers, and on and on. Hargrave himself would’ve been proud. Let’s face it, a bunch of 15 and 16 year olds with those hot little brown Arduin books, who wanted to play a Gnome or Dwarf Fighter *yawn* when you could be a jet black alien cross between an Elf and a Vampire?!?! (I had not even read Vance’s Dying Earth, let alone knew what a Deodand was at that time).

I think what Hargrave ultimately did for us, the generation that basically missed OD&D and the three little brown books of Gygax and Arneson fame, was to show us how D&D COULD be played. We had the AD&D books, which were very serious and rigid for the most part, and then along came these crazy rantings of this far out DM from California with Critical Hits and Deodanths and Shadra the Castrator. It was like the Punk Rock movement in D&D, and it blew the doors off of the stodgy old hard line fantasy formula that seemed so predictable at the time.

From those days forward, I home brewed like mad. Years later I had honestly begun to embrace AD&D for it’s own awesomeness, especially the DMG by Gygax…still my single favorite RPG book. It really wasn’t until recently that I thought back with fond memory to those early Arduin days, this time not with a sideways glance at an immature set of rules (and I do use the term loosely), but rather with an understanding that Hargrave was basically shaking the foundations of D&D and RPGing in general. I think Hargrave truly embraced the original message of D&D, and I hope that others can remember his work for it’s significance in that regard.

Love him or hate him, David Hargrave and Arduin are landmarks in the history of RPGs.

Here’s some linkage to a great recollection of Hargrave by Ethan Karp.

This might be 20 years too late now, but I never had a suitable forum for such a message: