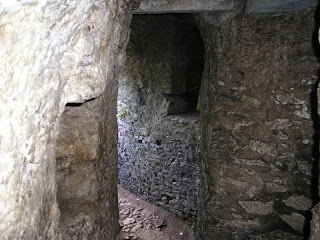 Nick of Castle Dragonscar recently shared a nifty little OD&D dungeon he made using the Distribution of Monsters and Treasure guide from Vol. III, The Underworld and Wilderness Adventures. I enjoy using that guide for both random fills and restocking, as well as determining the contents of random treaure troves.

Longtime readers will remember how I made a single roll table with odds derived from those guides, one which changed slightly and has now morphed into Version 3.

Version 2 (below) succeeded in requiring less dice rolling while maintaining the same odds for hidden treasure.

While considering how to streamline this process further, I realized I could do away with that last step in Version 2 altogether by introducing a new standard to the Dismal Depths, Hidden Chests.

Every dungeon has Traps and Secret Doors as well as suggestions on how to allow characters to sense or find them. Adding a third item to this concealed feature set seemed plausible and logical.

The Elf, in OD&D, has a 2in6 chance to sense the presence of a Secret Door, and double (4in6) the odds of locating one while searching in the proper area.

The Dwarf has the racial ability to note traps underground. As I've shared in the past, I use the Elf - Secret Door example as a precedent for judging this vague ability, allowing the Dwarf a 2in6 chance to sense the presence of a Trap, and double (4in6) chance to locate a Trap while searching in the proper area.

It only seems natural for me to handle this new, third standard in much the same fashion. Pick your campaign's burglar/robber/scalawag type (even if he's no more than a Fighting Man class-wise), be it the Hobbit, 'obbit, Halfling, Hobling, or Hoblit, and make that greedy little blighter the Hidden Chest expert. Again, using the Elf precedent:

The Hobbit has a 2in6 chance to sense the presence of a Hidden Chest, and double the odds (4in6) of locating one while searching in the proper area.

My concerns with the notion of Hidden Chests as a new standard include the fact that Traps and Secret Doors are found outside of rooms or chambers just as often as within, and that neither Traps nor Secret Doors are included on random tables like my latest Distribution & Restock Table. Well, not to worry, Hidden Chests can also be placed on the map with a symbol and legend description, just like Secret Doors. Nothing revolutionary here, but then I realized...why aren't there any random Traps on such a Distribution table? Hidden Chests takes care of that as well now.

But wait Sham, there's still no Traps on that there table! Ah, that's where I realized that the new standard would work well for my dungeons. The 1 out of 6 randomly filled rooms in your dungeon that end up with a Hidden Chest result can be, as always, filled manually, or one can roll on the subtable below:

And viola! I have Traps in my latest Restock table. Oh, and yes, there will be an optional Chest Traps Table for a half-dozen Trap examples. I'm still trying to decide how that will mesh with the Dismal Depths Trap Guide.

For those keeping score at home, this new version still maintains the original ratios. One third of the rooms have Monsters, of those one half have treasure. Two thirds of the rooms are empty, of those 1 in 6 have hidden treasure. Overall rounded percentages, for the original guide as well as all three single table versions, look like this:

The notion of Hidden Chests might introduce a new Magic Item for the Dismal Depths as well, single use Magic Keys which disappear after opening a Hidden Chest. This depends upon whether or not there are any ne'er-do-well rapscallion types included in the campaign or not.

~Sham, Quixotic Referee
Posted by Sham aka Dave at 5:51 PM

I'm impressed--as I so often am when I read your blog. I intend to get countless hours of use from the fruits of your ingenuity, so, thanks!

GRRRRRRRRRR. I was searching for the original post while preparing yesterday's game... and less than a day later, this is up?

Thanks Sean and Aaron.

Jim: My tags are only one of the disorganized facets here lol. You can find it under the Dismal Depths tag though. Not that you need to now.

Plenty of possibilities with the versions. I hope one of them is helpful!