What Price Glory part One 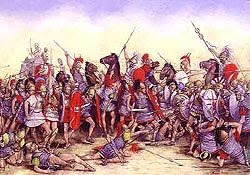 As promised, I am presenting here the 15 Rules Packets for What Price Glory.

Part One will be Rules Packets 1-5.

Hit Points are a measure of the physical damage a being can sustain. Hit Points for Characters, or other members of a Race, are slightly different than the Hit Points for Monsters. Characters increase their Hit Point totals through the acquisition of experience, and the extra Hit Points gained this way are an abstract measure of their expertise, morale and fatigue. Monsters are typically presented with an amount of Hit Points which represent their mass and ability to withstand physical damage before they are slain.

Each and every Character, or member of a Race, has two Hit Point values that must be recorded separately when sustaining damage, Vital Hit Points and Fatigue Hit Points. Vital Hit Points, or Vitality (VIT), is the amount of Hit Points at First Level. This is the actual tissue damage a Character can sustain before being reduced to zero Hit Points. Before any CON adjustments, this translates to six VIT for Magic Users and Clerics, and seven VIT for Fighting-Men. All Hit Points gained from subsequent levels after the first are Fatigue Hit Points (FHP), or simply Fatigue. These are the points which must be removed or lowered by attacks from enemies before the VIT points can be directly damaged. Thus, damage is sustained and subtracted first from FHP, once FHP is at zero, further damage is subtracted from VIT.

Vitality damage requires magical healing or long periods of rest to regenerate. Fatigue regenerates quickly during short periods of rest. Characters regenerate Fatigue at a rate of 3/level for each Turn (or 10 minutes) of rest.

Damage is the result of a successful hit in melee. Damage is calculated using d6. Characters and Monsters deal damage differently. Characters deal a default range of 1d6 damage, regardless of experience level. Monsters can deal 1, 2 or even 3d6 due to factors such as mass, fantastic prowess or even otherworldly power.

Certain weapons and fighting styles might add or deduct a point or two from a Character’s damage result, and Characters also have two bonuses which do not apply to Monsters.

Multiple Dice: Certain factors will allow a Character to roll more than 1d6, and select the highest roll from amongst all of those dice for damage.

When rolling Multiple Dice, while only a single die is used to calculate damage, any die that rolls a 6 and is not used as the highest result will add 1 damage to the attacker’s total. For example, if a Fighting-Man throws 3d6 to determine damage, and comes up with three sixes, his base damage would actually equal 8 (6+1+1) .

Dynamic Dice: Rolls of 6 call for an immediate roll again of that d6 for potential extra damage. This re-roll only applies to the single d6 selected to represent damage, not for each and every 6.

These small bonuses for the Characters can add some excitement to damage rolling, and result in some rare but memorable blows of heroic proportion.

Normally, an unconscious Character will remain at that less than one Hit Point state, At Death’s Door, until damage is healed or regenerated through rest. Certain types of damage might continue to reduce a Character’s Hit Points even while he or she is unconscious, as determined by the referee. For example, a Character on fire, in a pool of acid, or being devoured by Giant Rats will continue to lose Hit Points until death overtakes the Character.

The Combat Sequence is an exchange of attacks between two or more opposing sides, normally Characters versus Monsters. At the outset of an encounter, the referee determines Surprise, Distance and Initiative as normal. The Combat Sequence has a length of just five seconds. All participants in the encounter may perform a Move and an Action, except in the case of spell-casters. Casting a spell requires both the Move and Action portion of the Combat Sequence to perform.

The Combat Sequence is fast and furious, and results are determined in steps in the following order of resolution:

Missiles: Firing or throwing a Missile. This action may be held until steps 2 or 3 as long as the combatant is willing to forgo any movement. Missiles may not be used if the combatant is engaged.

Movement: A combatant may move during this step, or fire a held missile. Movement is based on a combatant’s Move rate as follows, to arrive at a round distance called the Combat Move:

Combatants may forgo any Missiles, Melee or Magic in order to perform an extra Combat Move. The extra Combat Move occurs during the Melee step, and movement may be halted if the Character is engaged during this move.

Melee: Adjacent combatants may conduct Melee now, or fire a held missile if not engaged.

Magic: Spells being cast during the previous steps will resolve now. Spell-casters hit during the Combat Sequence will have their spell interrupted, but not expended. This step encompasses all Magic Item activations as well. A Magic Item may only be activated if the Character did not fire a missile, or conduct melee.

~Sham, Quixotic Referee
Posted by Sham aka Dave at 11:29 PM

More coming soon! This will probably have a few changes here and there along the way-before it's makes it to the tiddlywiki in a final state. I'll put changes in the body and comments of the post.

I am already thinking it might be best to round off the Combat Sequence move rate as follows:

I gotta tell you, I read almost all of your blog. Great stuff indeed, keep it up!

Neat stuff here, Sham. I'm not sure I understand what you're doing with initiative, though. Does each character have three initiatives, or do you only go to Dex if you have a tie in range?

Also, if you have two opponents firing ranged weapons at each other, does the longest ranged weapon go first, even if the two combatants are fairly near one another?

Zulgyan: Thanks! I'm glad you are enjoying my ramblings.

Trollsmyth: Thanks for the input. I need to reword that packet, methinks.

Typically it should mesh well with the Combat Sequence of Missiles, then Move, then Melee, then Resolution of Magic.

I'll work on rewording that one as well.

A loaded Crossbow should be fast, but I do have rules that only allow a crossbow to be fired once every other round in Solstice, so that advantage is not reliable.

Ha! I was just thinking of doing something similar with crossbows in my Moldvay/Cook/LL hack. Ok, yeah that makes sense. Thanks again.

Your Hit Points packet inspired a post on my blog about my old Body Point/Fatigue Point system. Similar concept but different execution.

Thanks Randall. I'm updating two bits now: Changing Combat Move as I mentioned earlier, and rewording Initiative as pointed out by Brian.

PS - Part 2 will be up soon, and I'll be looking for more input.