The first Entourage for Solstice: Of Fortunes & Fools has been assembled. It's not much of an entourage YET, but The Cracked-Skull Clan has taken it's first, formative steps today. I was able to pry Derrick's fingers off of his mouse and keyboard long enough to get him to stop playing WoW, and make his Primary Character and Loyal Follower today.

I know Derrick, who by the way is our 13 year old, is not particularly creative with names, so I quickly jotted down a handful of potential character names. I then threw out about 10 possible entourage titles that HE might enjoy, and he chose the names you see below, and The Cracked-Skull Clan title.

Enter Razgor the Barbarian and Declan the Fighting-Man, Razgor's Loyal Follower. After picking the stat line for each, gold was randomly rolled and spent on gear. Nothing was left for another Henchman for The Cracked-Skull Clan, so it was armor and weapons OR another friend, Derrick picked wisely and got the gear.

Here is a scan of the two newbie characters and the stat block for The Cracked-Skull Clan: 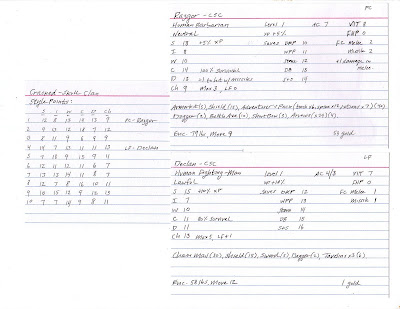 As you can see, the stats were altered slightly by lowering WIS by three to gain a point of STR for each character. This will give them both a slight bonus to experience gain.

As I'm typing this, Derrick has already returned to the WoW grind. I'm hoping he's not disappointed when one of his D&D characters dies, and it doesn't reappear at some magical graveyard as a ghost. In all fairness, he won't be...he's a D&D veteran now, having played through a handful of solo sessions in the earliest stages of Ulin Uthor, the Dim Expanse, using the Labyrinth Lord rules. Yes, it was Derrick who christened that dungeon with it's first fatality. Dak of Remember Dak! fame, the poor Dwarf who fell 90' to his rather messy death through a stone shaft.

Index cards and d6. What's not to like about that?

~Sham, Quixotic Referee
Posted by Sham aka Dave at 4:00 PM