Junk From My Closet: Cloudburst 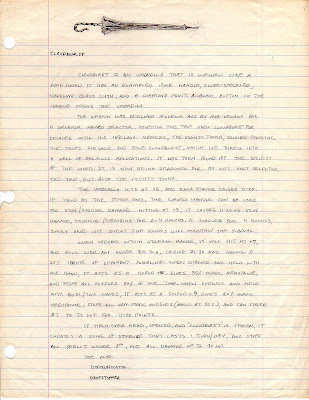 Anyway, this is typical of some of the over-the-top stuff we were indulging in back then. Artifacts were commonplace, characters were all in their 20's, and we thought that "The Day of the Dwarf" (by Roger Moore, from Dragon #42-sorry can't find a link) was a recipe for succesful campaign play (not really, we got a kick out of that story, though).

Often, the artifacts and monsters I home brewed were meant to 'wow' the players, and make them swoon at not only my creative genius, but also the sheer power of the artifact or monster I was introducing at the time.

Sadly, this little gem was never used as more than a situational weapon. That alone should clue you in to the ridiculous power level of that particular long running campaign. Everyone worth their salt had a far more powerful 'Sword of Opposition'. The swords were a collection (whose number grew whenever I took the time to make a new one) of mighty weapons, each a unique artifact, and each taking up both sides of a full page of paper. Yep, two page long artifacts. Heh.

In hindsight, those were some of the best gaming sessions I ever ran. Even if everyone ended up trying to kill one another, and the nigh godlike Swords of Opposition took the limelight. That was their purpose anyway, and the players gleefully let those swords lead the way to annihilation. Somehow, the campaign and our friendships survived.

I suppose I'll have to find some of those swords to scan in sometime.

~Sham, Quixotic Referee
Posted by Sham aka Dave at 8:14 AM

Dude, that is sweet! I totally saved that image for future use!

Please do so! And Thanks. Feel free to edit and make it fit your campaign (by nerfing the numbers to taste...it's still Cloudburst, just your world's relative version of it).

Mar-Vexians deserve their own post, and were inspired by a short passage in Arduin-I'll find it later. Thanks for the comment. I too enjoy reading about other people's games.

Man, I still write in all caps. I've done it for as long as I can remember. Drove a few of my teachers crazy, that's for sure.

I think it's awesome.

See, when you say that those were the best sessions you ever ran, that's a big part of what makes D&D great right there.

It doesn't matter what the power level is, high or low; what matters is if the playing group is having fun. See also Jim Ward and his high-level play, which led to the whole Monty Haul thing. When Jim did it, it was okay, because that was how he ran his game -- he just wanted to see what would happen if the players had this groovy stuff.

But when others take it as the 'genuine' way to play, and don't understand why, that's when you have problems.

Seems like most people get to such outrageous levels of play when they start out (the phrase Jousting Sky Castles springs to mind...)

And there's nothing wrong with that! I salute your, and your 15 year old self, for grabbing the brass ring with both hands and actually (gasp!) having fun with the game you play.

Too many people forget that.

P.S. And I bet you had fun coming up with Cloudburst, too, didn't ya? C'mon, admit it: You were in full flow of DMly creativity. And it felt gooooood.

Coffee, as always you've hit the nail on the head. I do agree that a lot of younger/first-time players, in those early long running campaigns, tend to explore high-level possibilities more.

Sure there were tons of 'over-the-top' extremely powerful artifacts...and monsters! But, there was balance. Characters died (and were sometimes raised), but no one wanted to be defeated. A total party kill was still the end of that party.

The fun back then? The limitless possibilities of play. Nothing's really changed, and people should be encouraged to play the game in a way that's fun for them.

And yes, I have always enjoyed making up stuff like this.

I guess that's why I'm always the Dungeon Master (or Dumb M**F***r as my player affectionately labeled me!).

I know my new campaign will be limited in scope, but I think that's more a function of the fact that we won't be playing for 10+ hours every single week. If we play 80 hours a year, that will be a good start. We did that in about 7-8 weeks in those days.

I guess that's why I'm always the Dungeon Master (or Dumb M**F***r as my player affectionately labeled me!).

My favorite version belonged to a friend of mine. His players were all calling on him at once, and no one voice stood out -- until one player shouted, "Hey! DOOM Master!"

My friend looked up from behind his screen and said, "I like that..." and it stuck.


Off topic but cool: The random gibberish I need to type in to verify is "watmozav", which sounds like a spell from Wizardry...

Excellent idea. I had a series of intelligent swords I designed using the guide in the old AD&D DMG. I meticulously drew each one on the back of an index card. That way, I could show my player's what the sword looked like without revealing its powers and perils.

The random gibberish I need to type in to verify is "watmozav", which sounds like a spell from Wizardry...

You lost me there, Coffee. Did someone secretly replace your java with Decaf?

Pith: Cool. I love home brewed stuff. My swords were all in this format. Sketch on top, two pages of notes below. I could show the sword, but the writing was too small to make out...same idea.