Another Teaser for Lower Caves

I started working on Lower Caves of The Darkness Beneath months ago. It has been a work in progress for quite some time, now. For those not in the know, it is my next planned adventure submission for Fight On!, level 5 of Calithena's group project megadungeon, The Darkness Beneath. I shared some of the very early ideas I had for this adventure here and here, but the project has changed quite a bit since those early ruminations. It is going to serve as the 'origin' of my home brewed Bugbears, the Bogbears (included in Issue 3 of Fight On!). Anyhow, I keep picking it up, then setting it down, as it is a non-conventional lay-out the likes of nothing I have done in the past.

The central theme is that Calithena's NPC Jalen Longspear runs an Inn for adventurers on this level, in the middle of the megadungeon, called the Halfway Inn. The challenge of making the Inn, Jalen and his guests interesting, and detailing why they are hanging out half-way down in this massive underworld death-trap has kept me from hammering this out in a few nights. The magnitude of the Inn, as I imagined it, forced a re-do of my first map; there simply wasn't enough space for actual adventuring, and I wanted to incorporate those Fae aspects I alluded to in those other Lower Caves posts.

I finally sat down and drew a map which I know will work well now. I have everything planned out, and about 30% of the text is done. All that is left to do is number the map as I place each idea, put my thoughts for each room into text, dress up the map, title it, and send it off to Calithena for a look-see. Hopefully this will see print in the Spring (provided it finds it's way into Fight On!). More on this as I continue the project.

Anyhow, I promised to share this back in August, so here's the initial map draw: 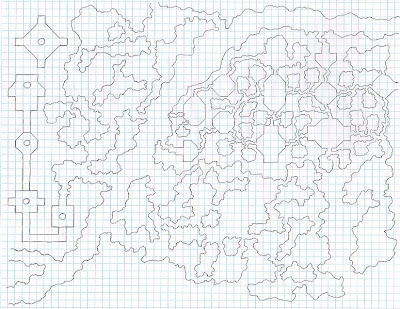 I claimed before that work would speed up on The Lower Caves, so I'll be careful to make that assertion again, but it is definitely moving along in a promising fashion.

~Sham, Quixotic Referee
Posted by Sham aka Dave at 6:28 PM

This one bent my brain a little -- I think you should definitely shade the final version. Beautiful work though, as always.

I agree, Max. Even as the guy that drew the damn thing, when I glance, it takes a second or two for the maze of squiggly lines to make sense. Once I add steps, doors, levels, shafts, etc and the numbers it might be clearer, but even then some form of empty space shading or lines might be needed. Thanks!