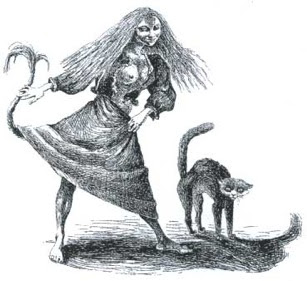 Last year, when I was kicking around ideas for the FO! dungeon The Darkness Beneath, I began to tinker around with ideas for one of the important denizens in Calithena's megadungeon, the Dark Trolls. One thing led to another, and I ended up with a few pages of notes on these monsters and their world beneath the surface. Afterwards I decided it was time I gave the venerable Troll a treatment of homebrew, so I went back and redefined the entire species. Admittedly, there is a very strong and intentional Gygax 1st Edition flavor given to these OD&D versions, but their primary heritage is Scandinavian mythology and folklore. With the renaming of many of the standard monsters in my growing Solstice/Dismal Depths work, Trolls became Troldes. I recently edited this piece and although I have no actual home for this information at this point, I thought it might be of interest here. Essentially, these are actually Trolls, but using the alternate spelling does serve to differentiate the Trolde from the standard TSR Troll.

Tomorrow I will copy the notes which were originally intended to be the Dark Trolls, and became the Morkevagten Dim Troldes. The Morkevagten are destined to have a major chunk of real estate in Ulin-Uthor, or perhaps some areas of The Dismal Depths.

Troldes, also known as Throlls or Trolls, are repulsive abominations created from the essence of the earth by a long forgotten power of chaos and night. There are numerous types of these vile, preternatural monsters, including but not limited to the ones described here. Troldes share some common characteristics, most notably that males of their kind are best described as large, brutish, ugly humanoids with great strength, elongated ears, big noses, knuckle-dragging arms and thick earth tone hides. Amongst individual male Troldes one might find many other beastly peculiarities, including such things as tusks, scraggly or quill-like hair, cyclopic eyes, and splotchy hides with crags, bumps and warts.

Female Troldes are certainly the fairer members of the race, appearing as seductive women with normally hidden cow tails. Female Troldes come and go between the world of man and that of Troldedom. Often described as erotic seductresses, legends exist of female Troldes that have actually married men and become mortal, successfully hiding their true nature for the rest of their days. The more notorious female Troldes seduce men and take their seed back to Troldedom. Others abduct infants from mankind and likewise return them to the world of the Troldes. What becomes of these young humans is not known, but many societies of the land blame deviant behavior on Trolde upbringings. Troldespawn is an unflattering term used to describe the worst sorts of men. Female Troldes are rarely encountered alongside their male counterparts, being altogether elusive and virtually undetectable within Troldedom. Little is known of them and it is assumed that they are one with the earth, emerging only to reproduce or mingle with mankind.

Male Troldes will return to their natural state if bathed long enough in the light of day, turning to stone and losing their magical life-giving essence. The spirit of the now inanimate Trolde will return from whence it came, dead and gone forever. For this reason, male Troldes are either nocturnal or subterranean. As long as a Trolde is in contact with earth, be it soil, dirt, sand, rock or stone, its form will regenerate wounds at an astounding rate. Certain types of damage may not be thusly healed, such as wounds from acid, fire or lightning. Troldes are immune to damage from cold, whether it is natural or magical, but take extra damage from lightning. Wounds upon a Trolde dealt by stone, wood, bronze or even silver weapons will inflict reduced damage in all cases. Iron is the only metal which will cause a Trolde full damage, whether it is magical or mundane. Furthermore, Troldes despise iron, and are loathe to touch it.

Troldes have their own language, called Trolsprog, with a wide range of words which hold meaning only to their kind, owing partially to their acute olfactory senses. Trolsprog is noted for long S’s and hisses. Troldes can see naturally in the dark, and are only surprised on a roll of 1in12. Given the right circumstances, a Trolde can track down non-natives while in its own environs.

While Troldes are an unnatural union of earth, chaos and night, their kind consists of both young and old. The larger Mountain and Forest Troldes tend to be solitary, longer lived, and far less reproductive than the Mound and Dim Troldes. Mound and Dim Troldes exist in varying levels of clan based groups. Male Troldes are stooped and hunched. Their effective height is normally equal to their HD minus one in feet. A HD 7+3 Mound Trolde would be about 6 feet tall, a HD 10+3 Forest Trolde would be about 9 feet tall, both would be considerably taller if actually upright and vertical.

Haugtrolde (Mound Trolde): Chaotic, # Appearing: 3-12, AC: 6, Move: 12, HD: 6+3 to 8+3, Damage by weapon +1, Avg Int: 8. Troldes that tend to roam quite often, establishing new mound and tunnel homes, or returning to older ones as they continually expand their hunting grounds

Bjergtrolde (Mountain Trolde): Neutral, # Appearing: 1, AC: 3, Move: 9, HD: 9+3 to 11+3, Damage 2d6+2, Avg Int: 10. The largest of all Troldes, given to extended periods of hibernation in vast cavernous regions beneath and within mountains.

Uklartrolde (Dim Trolde): Chaotic, # Appearing: 2-12+, AC: varies, Move: 9, HD: 7+3 to 9+3, Damage by weapon +2, Avg Int: 11. Dim Troldes have a base AC 6, but most wear bronze lamellar or plate armor resulting in AC 5, 4 or even 3 if using a shield. These Troldes continually work toward carving out a permanent home deep in the underworld, to varying degrees of success.

Turn to Stone: Troldes will turn to stone and perish after 1 turn in full day light. After 5 rounds movement is reduced to one-half.
Immune to Cold: All forms cause 0 damage.
Non-iron weapons: Deal one-half damage to Troldes.
Iron weapons: Cause +1 damage when striking Troldes.
Attacks upon iron-armored targets: Troldes have a -1 penalty to hit such targets.
Lightning Damage: Causes +2 points per die against Troldes, and may not be regenerated.
Fire/Acid Damage: May not be regenerated.
Trolde Regeneration: Troldes begin to regenerate damage at a rate of 3/round at the beginning of the third round after damage has been sustained (for example, if a Trolde takes damage in round 2, it will start to regenerate as round 5 begins). Only acid, fire or lightning damage may not be regenerated. Trolde Regeneration continues unabated even if the monster is hacked to pieces. Unless the entire Trolde is burnt or exposed to acid, it will eventually rise up at full health. The various limbs and remains of a slain Trolde will either crawl back together and regenerate, or form a new body from the largest remaining piece. Severed parts seem to possess a will of their own, and will continue to grab, claw, bite or scuttle about independently during a conflict. Dim Troldes in particular are known to have devised methods for ensuring that their fallen are able to regenerate in a safe location.

Tomorrow watch for the Morkevagten Dim Troldes intended for a vast, as yet unmapped dungeon level in an upcoming adventure.

~Sham, Quixotic Referee
Posted by Sham aka Dave at 4:58 PM

Very cool (and not a little scary!)

No relation to Runequest Dark Trolls, I'm guessing. You know, the ones often depicted with gigantic jack boots?

I really don't use trolls enough in my own games. I used to have all kinds of trolls, regular trolls, cave trolls, river trolls, sea trolls...

Bruno: Being entirely unfamiliar with RQ, I've no idea how to answer.

I really like Trolls. They've always been one of my favorite AD&D monsters. I love Scandinavian folklore as well, and I felt that picking and choosing the bits I liked of both might make for a fine Trolde.

The kicker for me is the female Troldes. Lots of potential. The males are more or less the fodder of the race. I'll leave the females as is. That way no one will really ever understand them.

Now these creatures deserve to be called trolls. Very good. I might use these or a non-regenerating versions in an upcoming game.

Thanuir: Thanks. If you expunge the AD&D 1E influence (regeneration and the fire/acid issues associated with it) you would be much closer to a scandinavian troll.

I included the female aspect and the lightning/iron stuff based on mythology.

Bravo! I'm just reading The Hobbit to my youngest...and William, Bert and Tom would be proud that you've written up such a wonderful little piece about their race.

I love the idea that troll-wives are comely, the mirror opposites to their brutish husbands.

I should poke around some more in my hard drive. There's stuff I wrote up and forgot about from the past year hidden on there.

Good stuff. These are an excellent variant on the traditional D&D Troll. Different enough to warrant their own write-up, not so dissimilar that the relationship is lost.